These Were My People 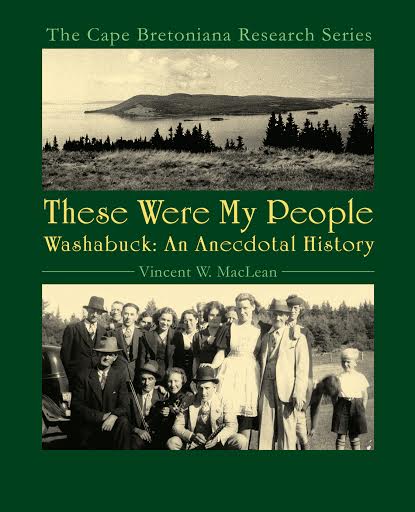 Washabuck is a beautiful hamlet on the Bras d’Or Lake about a 15-minute drive from Iona, Cape Breton, Nova Scotia. It was first settled by Gaels from the Isle of Barra, Scotland, in 1817.

These Were My People feels like a door opening to a warm kitchen with a friendly host and storyteller who makes room by the stove just for you. Historian A. J. B. Johnston calls it a “Washabuckopedia” in his forward. And there’s lots of information for sure, for those looking for family connections and archival documentation, it’s all here, with a very helpful index, appendices, notes and a bibliography. You can tell it was written by a scholar. But this scholar is a humble Washabuck native with a good sense of humour who shares his love of the characters and times that shaped his community.

Vincent MacLean is a retired teacher from the Nova Scotia Community College. He tells how his passion for genealogy and community history began when he was 10 years old, home sick from school. His mother handed him The Highland Heart in Nova Scotia by Neil F. MacNeil to read. “Not only did it tell the story of my people in an entertaining and delightful and informative fashion, it was penned by a Washabuck native, and long-time managing editor of the New York Times,” he says.

This experience opened his eyes to the possibilities of recording the stories of his people and documenting the connections through genealogy. To do this, he did an enormous amount of research (about 50 years) beginning close to home with the knowledge of his mother, two grandmothers, and his mother-in-law. These women knew the genealogy of many residents and freely shared it. It also helped that the Gaelic way of identifying a person included the father’s and grandfather’s Christian names as well as an occupation and other descriptive term. So Vince’s paternal grandmother was known as Theresa Mhicheil Eoin; Theresa, daughter of Michael son of Eòin (MacNeil), pioneer.

MacLean also went to the community, to other relatives and neighbours to get their stories. He makes good use of material from A. D. MacLean (1889-1974) a grandson of the first MacLean born in Washabuck and a local journalist. His story of the “Three Rory’s” Election, set in 1937, gives a hilarious account of the political fervour at the time. That’s another valuable aspect of this book, the references to long past published and unpublished works by Washabuck natives.

MacLean covers all that makes a community from day to day life on the farms, transportation, education, religion, post offices, politics, a military salute, to the first cars and of course the music. Celtic performers with roots in Washabuck are many, probably best know today are the Barra MacNeils, whose mother Jean grew up in the musical MacKenzie family in Washabuck Bridge, with fiddlers and singers and herself a popular accompanist on piano and stepdancing teacher. MacLean’s father Michael Anthony was also a well respected fiddler.

The beauty of this book for me is the “anecdotal” history. I love the many stories including those of “Marjorie’s” how the local Co-op was known by its manager’s name. Marjorie is described as, “… a terribly honest woman, but she saw to it that the Co-op was always on the winning side.” He goes on to tell a few funny stories that illustrate her commitment to her job.

Another favourite of mine is the story of seven year old Lawrence MacDougall who used his sled to cover the two miles to St. Columba School. “Lawrence had his sled cranked out at a maximum velocity in one of the ice-encrusted dual tire tracks, when he unexpectedly met John MacDougall’s brother Joe, who was plodding along with his Apache horse and riding sleigh, up the steepest part of the mountain road, straddling the same frozen track.” I won’t give away the climax of this one; you’ll have to read it yourself.

The hard times are also covered; for example, the feat of bringing a coffin home over snow banks and ice gives an inkling of the determination and ingenuity of the people.

MacLean says his goal in writing this book was “. . . to mingle a warm anecdotal approach with salient facts for future generations . . .” I’d say he’s done that very well. These Were My People is the second volume in the Cape Bretoniana Research Series.