Through the Eyes of a Belfast Child 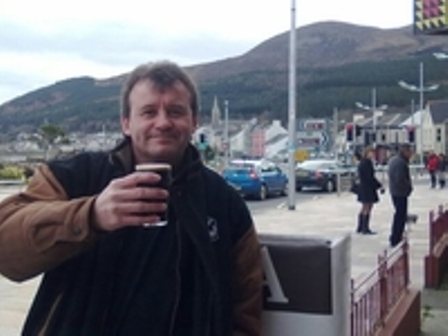 Irish-Canadian author Greg McVicker grew up in Belfast, immigrating to Winnipeg in 1985. His latest effort, Through The Eyes of a Belfast Child, is a series of personal reflections and poems looking back on life in Northern Ireland. Recently we spoke with him about the book.

What inspired you to tell this story?
I’ve always been a writer since leaving my beloved hometown of Belfast back on July 19, 1985 and immigrating to Winnipeg, Canada. Over the years I had written countless letters to friends in trying to help address my homesickness, a process that lasted eighteen long and arduous years. In 1998, I began writing poems about life events, whether based on my own experiences growing up in Northern Ireland, or that of someone else who had the profound courage to share their story with me regardless of how positive or challenging it was and as seen through my lens. Thus, I had composed approximate twenty poems over a period of a few years and would share them with friends, family, and co-workers. The inspiration behind ‘Belfast Child’ itself started back in 1998, but the motivation came into play in August of 2010 when a colleague suggested that I write a book. Although I had been told this many times before and considered doing so, I never truly put any serious effort forth.

Did it come together quickly or did you really need to work at it?
It actually came together rather quickly. The initial draft of ‘Belfast Child’ was written in two weeks and consisted of 42,000 words. I began building my personal reflections around the poems themselves, in trying to provide readers an idea behind the composition of each poem and expanding upon my thoughts. I then looked at incorporating a select number of articles I had written between January and April 2008 as a volunteer staff writer for The Manitoban, the University of Manitoba student newspaper during the final four months of my Bachelor of Social Work degree. Six of those ten articles now appear in the book, as their relevancy as based on world issues are just as prevalent today as the day that they were written. To be completely honest, writing the book was the easiest part of the entire process.

What was the most challenging aspect of the process?
The most challenging aspect of this whole process was editing the book and in trying to make my story flow. What had happened was that after I had submitted ‘Belfast Child’, which was accepted for publication on July 3, 2013, the following day, my pet dog, Brandy, who had been with me for sixteen years, died within my arms. My coping mechanism was to throw myself into writing more. This included telling Brandy’s story and how she came into my life up until the day of her death, and the events associated in trying to come to terms with her passing. So, within two weeks, my manuscript had grown from 42,000 to 72,325 words and included the writing of four new poems and their associated reflections. During that time, a number of life events continued to have a massive impact on me, including a flare up of ‘The Troubles’ back home in Belfast. Although my editor had already began reading through my submitted draft and making suggested changes, my own draft kept growing until it eventually reached 88,000 words. Currently in its printed form, it stands at approximately 75,000 words.

What was the most rewarding part of the experience?
The most rewarding part of this experience was to finally see my book in print and available for a global audience. It was honestly a labour of love but in some aspects, quite a painful process due to the task of editing the manuscript over thousands of hours. My father had always told me “You only get one dig at it,” meaning that there is only have one chance to do things right so it is better to make all of your mistakes on paper and plan things out properly. As much as I appreciate his insights and guidance, I think his advice became the bain of my existence as one of my biggest personal challenges is working from a ‘perfectionist’ lens. So, to now have my book out there is a feeling of glorious relief and one of personal reward.

What did you learn during the process?
I learned a number of things during this process including that writing your personal story is a never-ending journey, one in which you expose all of your vulnerabilities to the world and whereby a sense of self awareness becomes extremely prevalent. Within each personalized copy of the book, I write: “In life, we all have a cross to bear and a very unique story to tell; we just hope that someone will take the time to listen.” It really is about wearing your heart on your sleeve and having all of your emotions, thoughts, feelings, and worldviews out in the open for people to see and interpret through their own lens, whether they agree with it or not. But that is what makes us all unique. I also learned that putting a book out for the world to see is not as easy as it looks. The personal, emotional, time, and financial investments that go into writing, developing, supporting and promoting the book are astronomical. It comes down to a personal level of wanting to see how successful one would like their book to become, and in whatever form that presents itself as.

How did you feel when the book was completed?
Utterly and thoroughly relieved! Although, I am sure that my editor will tell you that the book was never truly completed after their “final” review of the manuscript. On December 4th, 2013, I received the draft back for my assessment and in preparation of moving it into the publishing phase. However and on the following day, the world would learn about the passing of former South African President, Nelson Mandela. Thus, I took that as a sign in that I would need to write a personal reflection on his life and entitled it ‘Godspeed, Madiba.’ So, and although when readers come to the end of the book in my reflection called ‘One Final Thought’ and see life as captured through the eyes of a Belfast Child, in true Irish fashion, there is a whole other piece awaiting them. It’s like when we are having a conversation back home and say our first cheerio – forty-five minutes later we are still saying our goodbyes!

What has the response been like so far from those that have read it?
The response has been phenomenal and beyond my wildest expectations. There have been so many people who have written to me to express their thanks for telling “their” story and what their experiences in life have been all about. Some have said that a five star review really does not go far enough. ‘Belfast Child’ is all about the human journey throughout life and what defines us as being humans, our worldviews, and within the environments in which we live, work, grow, and play. Thus, having countless individuals read my story and for them to take time out of their day to provide me with their personal thoughts on my writings has been both a completely humbling yet rewarding experience.

Is your creative process more ‘inspirational’ or ‘perspirational’?
I believe that my creative process is definitely along the lines of an inspirational one as there are those who have inspired me throughout my life, more specifically, my mum, who is the cornerstone of this book. Growing up during ‘The Troubles’, I watched my mum go to extreme lengths to ensure that her four asthmatic children received a good education, clothes on their backs, food on the table, and fully protected by a mother’s love during a very dark and dangerous period of Northern Ireland’s troubled history. From that, in my personal life as well as that as a Social Worker, I have found inspiration in other individuals in how they have overcome challenges and strive to make change for the greater good of humankind. We can all learn from that and in creating a better world for this generation and the next.

What makes a good book?
To me, what makes a good book is one that draws the reader in, exposes their own raw human emotion, touches upon every nerve ending within their body, and keeps them spellbound so not only will they not want to put the book down, it intrigues them to read it numerous times. In writing ‘Belfast Child’, my hope was to captivate the audience by having them visualize events or places I’ve described, have them become a part of my story, and allow for them to ride the waves of an emotional tsunami either within a couple of paragraphs or all throughout the book itself. In doing so, readers are provided with an opportunity to pause, think about each section of the book whether a personal reflection or a poem, and take them through that journey as if I were telling their own story. If a book can make people laugh hysterically one moment only to then immediately shift their emotions to uncontrollable tears, anger, grief, sadness, provokes thoughts, allows for personal introspection with respect to their own life and evokes positive change, then I believe that the writer has achieved their initial goal. To hear such responses from those who have read my book thus far has provided me with that validation which, on a uniquely personal level as a first time author, is extremely flattering.

What’s next on your creative agenda?
My hopes are to conquer the world book market and see ‘Belfast Child’ go viral! Actually, I have already written two children’s books, which are part of a series entitled “The Adventures of Silly Billy.” The first one, “Silly Billy and the Postage Stamp” and the second one, “Silly Billy and the Good Deed”, are based on my own real life experiences growing up back home in Belfast, making all sorts of mistakes, and learning from those. The reviewers who have seen the manuscripts thus far have said that they are extremely funny and will appeal to children, parents, and schoolteachers of all ages since we can all relate to our childhood experiences as part of our development and growth. As such, I hope to work with an illustrator and a major book publisher in putting these out to a global audience. I’m also currently writing more poems, since it was suggested that I publish all of them within their own book based on their strength and storytelling format. Lastly, I would love to see ‘Belfast Child’ be developed into a screenplay, as it is a story that keeps giving of itself regardless of where our own human journey in life starts, takes us, and where it might eventually end up.