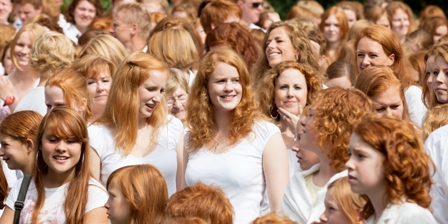 Puck Fair in Killgorin, County Kerry
Where else in the world can you see a goat crowned as a king? Located in the heart of county Kerry, Killgorin holds the Puck Fair every August 10th, 11th and 12th. One popular origin of this tale involves a puck (or male goat) who saved the local town from pillaging. When raiders took over the local villages, they found a herd of goats grazing on the mountainside. Before they could be captured, the goats ran away, with the puck reaching a local village just in time to alert the people of the raiders.

Fleadh Traditional Irish Music Festival
The official name is Fleadh Cheoil na hEirann, but it is often shortened to Fleadh for obvious reasons. What you really need to know is that it’s being held in Sligo this August 10 to August 17. The location changes every year, but the traditional Irish music festival always occurs in August.

Dublin Horse Festival
Also in August, if you’re a fan of equestrian sports like dressing and hunting, this will be your favorite of the festivals in Ireland. We recommend Ladies’ Day as a must see, where one lucky woman is awarded the Aga Khan Trophy for being the best dressed.

Redhead Convention, County Cork
“A whacky festival of ginger-loving madness” as a tagline says it all. In its fifth year in 2014, the convention started as a joke between a redheaded brother and sister. Today, it attracts hundreds of gingers from all over the world. Visit Ireland August 22 to August 24 to attend.

Kilkenny Arts Festival
In its 40th year, you’ll attend this festival on the grounds of Kilkenny Castle. It was founded by a group of musicians. However, they’ve since expanded to broaden the kind of arts you can experience at the nine day event, August 9 to August 18, 2014.

Rose of Tralee Beauty Pageant
If you happen to be around during this pageant, you might appreciate attending live the event that shows some of the highest television ratings in Ireland. A glorified beauty pageant, women of Irish decent come from all over the world to compete for the title of Rose of Tralee. This year, it’s August 16 to August 20, 2014.

National Ploughing Championship in County Laois
Um, yeah, so, it’s technically an agricultural trade show featuring over 900 exhibitions. However, there are also 300 competitions worth looking into. As festivals in Ireland go, this would rank as a nod to Ireland’s farming culture, plus a giggle or two. It’s held September 23 to September 25.

Galway Oyster Festival
Held September 27, 28, and 29 in 2014, you can taste the famous Clarenbridge oyster, along with other seafood delicacies at this festival. Internationally recognized, you’ll love eating your way through Ireland.