Top 10 Things to do in Edinburgh in Festival Season 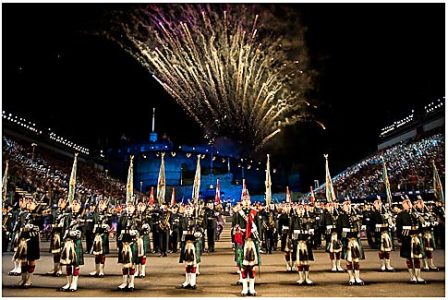 1.  Take it all in
Edinburgh in August is like nowhere else in the world.  The Edinburgh International Festival, the Edinburgh Festival Fringe, the Edinburgh Book Festival, the Royal Edinburgh Military Tattoo, the Edinburgh Mela and the Edinburgh Art Festival are all happening.  That’s around 4,000 different shows and events all happening in the one place at the one time.  And that’s before you take in all the street performers on the Royal Mile. Add to that the hundreds of thousands who come to watch and you have a city that is absolutely buzzing.  The best things is that there is something for everyone in Edinburgh.  Get yourself a program and find yourself some comedy, theatre, music, dance, opera or art.  You could go and see something every hour, every day for the whole month and still only scratch the surface.  On top of that you have all the usual Edinburgh museums and galleries and sights to see.

2.  The Royal Edinburgh Military Tattoo
The Royal Edinburgh Military Tattoo is quite the spectacle.  Around 1000 performers from military bands all over the world are joined by acrobats, display teams and dancers to take part in one of the world’s biggest celebrations of pageantry.  Words can’t do it justice.  It’s something that has to be watched, heard and experienced.  And over the space of three weeks more than 200,000 people come to Edinburgh Castle to do just that.  Nearly 100 million watch on TV in 30 countries.  This year’s theme, ‘Our Home, Friends and Family’ will see guests from the Commonwealth descend on Edinburgh including fiddlers from Shetland, Zulu dancers and an Indian folkloric group.  And if you can’t get a ticket to watch on the Esplanade of Edinburgh Castle, then get yourself a spot outside, listen to the pipes and watch the impressive firework display that rounds up every night’s performance and fills the sky with colour.

3.  Have a laugh
The Edinburgh Festival Fringe is the world’s largest arts festival, made up of comedy, theatre, music, children’s shows, dance, cabaret and spoken word. Over the last 67 years, the Fringe has developed a reputation as being a place where comics can get discovered and find their big breaks.  People like Hugh Laurie, Eddie Izzard, Mike Myers, Craig Fergusson, John Cleese, Billy Connolly and Eric Idle have all spent some of their formative years in Edinburgh.

4.  Lose yourself in a good book
Head to the world’s largest book festival.  This year everyone from Diana Gabaldon to George RR Martin to Harkin Murakami and Maggie O’Farrell will be talking about their writing.  Even though the book festival nearly always sells out every event, just heading up to the festival village to take in the atmosphere and take a wander round the book shop is a fine way to spend an afternoon.  Go on a Saturday morning and there’s a good chance you’ll bump into the Gruffalo.

5.  See some of the best new theatre in the world
The Fringe has a reputation as a home for the world’s best new writing.  Every year theatre companies take their newest work to Edinburgh.  Tom Stoppard, Alan Benet, Mark Ravenhall all found their big break at the Fringe. This year the top tips include MacBheatha, a reimagining of the breakdown Macbeth and Lady Macbeth’s relationship, and innovative theatre-maker David Leddy’s Horizontal Collaboration which uses a different cast every day.

7.  Go dancing
As well as being able to watch incredible dance as part of the Edinburgh International Festival and the Fringe, there are plenty of opportunities to join in. Bal Moderne at the Hub is an immersive dance experience inspired by the songs and dances of wartime Europe.  Audiences are invited to dress up in period clothes and dance with the Bal Moderne dancers. This is Ceilidh is a fun, raucous ceilidh held every night at 11.30pm.  It’s for pros and beginners and comes from the people behind the Red Hot Chili Pipers.

8.  Watch something at the world’s most prestigious festival of the arts
The Edinburgh International Festival was established in 1947 and soon became one of the world’s most spectacular celebrations of high art.  Amongst much, much more this year sees the forces of the Mariinsky Opera and Orchestra performing Berlioz and Australian theatre company Back to Back present Ganesh Versus the Third Reich. The big draw at the International Festival this year are the James plays.  Three separate plays telling the story of James I, James II and James III.  This is the first every collaboration between the National Theatre of Scotland and the National Theatre in London.

9. Get out of the city
There’s plenty of shows happening away from the big venues and pubs and clubs of Edinburgh city centre. Singers and swimmers will put on a show at sunrise and sunset on Portobello Beach in Out of Water. Head out west to Gorgie City farm for family friendly comedy, dancing and theatre. Or head up to Arthur’s Seat for a comedy show with a pretty incredible view over the city.

10.  Look, create and take part in some art
This year the 11th annual Edinburgh Art Festival has more than 40 exhibitions at 30 museums and galleries and artist-run spaces. During the Edinburgh Art Festival, many old forgotten buildings are turned into temporary exhibitions. spaces.  2014 will feature spaces never before opened to the public, from the Old Royal High School on Regent Road to a disused Police Box on Easter Road.