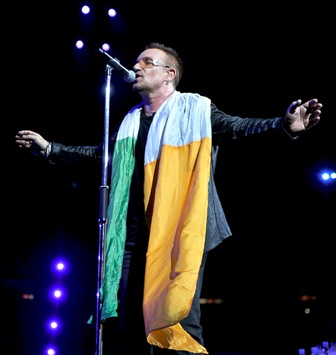 Many times over the past 30 years, U2 have outpaced their origins as a scrappy Irish post-punk group to take on bigger roles: best band on the planet, politically conscious social messiahs and, finally, elder statesmen of rock. And through it all, they’ve challenged themselves while throwing their fans the occasional curveballs. From digging America’s roots to exploring techno-trash to settling into a classic, identifiable sound, U2 have created one of the most daring and important music catalogs of the past 50 years. We picked through it to make our list of the 10 Best U2 Songs.

Everything’s in place here: the Edge’s sustained guitar rings, Bono’s messianic delivery, the sound of something Really Important happening. ‘With or Without You’ (a No. 1 hit in the U.S. and pretty much everywhere else on the planet) is the moment where rock’s best band became the most important and biggest group in the world. It’s a defining performance, and it’s a great song — the highlight of an album filled with them. It’s big, beautiful and timeless.

Like so many other cuts on our list of the 10 Best U2 Songs, ‘One’ means different things to different people. It was originally written about the band’s fractured relationship at the time, but it has since taken on various interpretations — from a breakup song to an AIDS anthem. Either way, it’s one of U2’s loveliest songs and one of the ’90s key tracks.

After several years of playing around with experimental non-linear music and techno club beats, U2 returned to their classic fist-raising sound on their 10th album. The opening cut and lead single is one of their all-time best, a four-minute anthem that’s gained more resonance over the years (in light of tragedies like 9-11 and Katrina). It’s a powerful performance and a welcome return.

‘Bad’ is the only track on our list of the 10 Best U2 Songs that wasn’t released as a single, but it remains one of the band’s most popular songs. The slow-building centerpiece of the group’s fourth album is about heroin addiction, but like so many other U2 songs over the years, its specific meaning has shifted to take on more general interpretations. For an even more electric version of the song, track down the live take from the excellent 1985 EP ‘Wide Awake in America.’

‘I Will Follow’ wasn’t U2’s first single (the non-album cut ‘Another Day’ holds that honor), but it’s the first song most fans identify them with. It’s certainly the first to successfully incorporate the group’s template of echoing guitar lines underlining Bono’s arena-shaking vocals. Even then, they sounded like they were aiming for bigger things.

‘New Year’s Day’ was U2’s first charting single in the U.S. (it reached No. 53), and its impact shaped the band’s career, giving them the green light to talk politics once in a while. The song itself is about the first non–communist party-controlled trade union in Poland, but it’s taken on greater significance over the years as a celebration of spiritual, political and personal rebirth.

The second single from the monster breakout album ‘The Joshua Tree’ (see No. 9 on our list of the 10 Best U2 Songs) continues the band’s mining of American music that started with 1984’s ‘The Unforgettable Fire.’ ‘I Still Haven’t Found What I’m Looking For’ is their gospel homage, a soulful spiritual ode that became their second No. 1.

The opening track from U2’s third album marks the moment where people started taking them seriously. ‘Boy’ and ‘October’ were good records, but ‘War’ took them to another level. The LPs’ thematic trajectory is right there in their titles — stories of childhood and religion give way to death, loss and suffering. This great protest song marches to a redemptive beat.

‘The Joshua Tree’ was a defining album for U2. It was their first No. 1 LP and their biggest seller. But more importantly, it pushed them from a near-great rock ‘n’ roll band into a very great one. It made them stars, and it still stands as one of the best albums of the past 25 years. The opening track sets the pace and tone — a shimmering classic that stakes out its anthemic territory within the first minute.

The band’s fascination with American culture and music (which culminated with the semi-live 1988 LP ‘Rattle and Hum’) began with 1984’s ‘The Unforgettable Fire,’ an exploration of myths and legends wrapped in a mystic soundscape. This single — U2’s first Top 40 hit — is a tribute to slain civil rights leader Martin Luther King, Jr. and one of the album’s sturdiest building blocks.