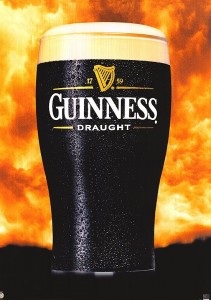 Ask most folks to name an Irish invention and they’ll gleefully rattle off a list of comical Celtic creations like powdered water, the solar-powered flashlight and the pedal-powered wheel chair. Although it’s easy to poke fun at the Irish, the sons of Erin have used their ingenuity over the years to create a number of devices that enriched our lives immeasurably.

Guinness: Beer drinkers around the world owe a debt of gratitude to Arthur Guinness, the innovative Irish brew master whose delicious dry stout still bears his name. Guinness first began brewing ales in Leixlip before transferring his booming business to Dublin’s St. James’s Gate Brewery, where he signed an unprecedented 9,000-year lease at £45 per year. More than 250 years later, his famous “Pint of Plain” has become the best-selling alcoholic drink of all time in Ireland with sales exceeding €2 billion annually. Slainte!

Literature: Although the Irish didn’t invent the English language, it can be argued that they perfected it. From the searing satire of Jonathan Swift to the brilliant blather of James Joyce, Oscar Wilde and George Bernard Shaw, Irish scribes have always displayed an enviable gift of gab. In the words of acclaimed author T.E. Kalem: “The English language brings out the best in the Irish. They court it like a beautiful woman. They make it bray with donkey laughter. They hurl it at the sky like a paint pot full of rainbows, and then make it chant a dirge for man’s fate.” For those of you keeping track at home, Irish writers won the Nobel Prize for Literature three times in the 20th century, which is a remarkable record for a tiny island nation boasting about 4,470,700 citizens.

Chemistry: Although it may not have seemed like such a great invention when you were failing your chemistry in high school, it’s hard to discount Robert Boyle’s creation of this multilayered scientific discipline. The uber-intelligent Munster native came up with the foundations of modern chemistry in 1661 when he published The Sceptical Chymist, an oddly spelled but influential tome that laid out his groundbreaking theory of elements as the undecomposable constituents of material bodies. Hundreds of years later, teenagers are still silently cursing his name as they desperately try to wrap their heads around his brilliantly obtuse ideas.

Color photography: One of Ireland’s most accomplished scientists, Holywood House resident John Joly cemented his place in history in 1894 when he came up with a technique for producing color photographs from a single plate. His simple, but ingenious, invention changed the way we see the world and paved the way for the full-color nudie mags we all know and love. Maybe that’s why they call it, “getting your Jollies.”

U2: U2 first began redefining pop music in 1976 when Bono and his bandmates began producing their unique style of stadium-rattling hits. The group has since sold more than 145 million albums worldwide and won an unprecedented 22 Grammy awards. While their music is certainly worthy of the accolades they’ve received, U2’s greatest legacy might just be their social activism. Former UN Secretary General Kofi Annan summed it up best when he observed: “You have made people listen. You have made people care, and you have taught us that whether we are poor or prosperous, we have only one world to share. You have taught young people that they do have the power to change the world.”

The Tank: Back in 1911, as Home Secretary in the UK, Winston Churchill issued a commission for a vehicle that was “capable of resisting bullets and shrapnel, crossing trenches, flattening barbed wire, and negotiating the mud of no-mans land.” In other words, he was looking for something that could safely transport him through Belfast’s sketchiest neighborhoods. The result was the world’s first tank, a nearly indestructible armored vehicle created by Blackrock engineer Walter Gordon Wilson. The tank has since undergone a series of radical innovations, but the basic principles of this essential battle buggy remain the same.

The Modern Tractor: Modern agriculture got a helping hand in the 20th century from Harry Ferguson, a whip-smart County Down bicycle repairman who invented the modern tractor — and he didn’t stop there. Ferguson went on to develop the first four-wheel drive Formula One car and he became the first Irishman to build and fly his own airplane. Today, his name lives on in the Massey Ferguson company, a successful privately owned firm specializing in tractor manufacturing.

The Submarine: The submarine owes its creation to Ireland’s very own John Phillip Holland. An engineer by trade, this bespectacled County Clare native developed the first submarine to be formally commissioned by the U.S. Navy in 1900. Over the years, he also came up with a number of innovations for his underwater vehicle like the screw propeller, a hydrocarbon engine, the submarine gun, and an auto-drive mechanism. Modern warfare — and the plot of Crimson Tide — would be at a loss without his ingenuity.

Soda Water: If you’ve ever used soda water to remove a stain, you have Robert Percival to thank. The Trinity College professor created the bubbly beverage in Dublin in 1800. Like many Irish inventions, it eventually mingled with alcohol, giving us delicious concoctions like whiskey and soda and Campari and soda. Now those are Irish contributions worth drinking to!

Flavored Potato Chips: Leave it to the Irish to revolutionize the potato. Joseph Murphy turned the lowly spud on its head in 1954 when he introduced cheese and onion chips. The flavored snacks became a huge sensation and Murphy later sold his seasoning technology for a small fortune to an enterprising American company. These days you can buy chips in dozens of questionable, stomach-churning flavors including Caesar Salad, Cheese Cake and Gara Masala. Why you’d want to eat any of them, however, remains a mystery.