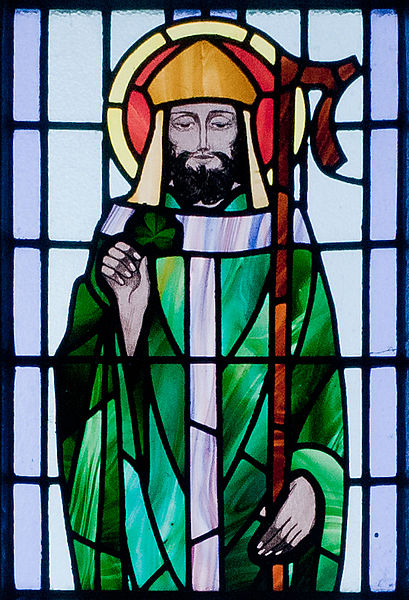 2. This St. Patrick’s Day we’ll all be wearing green, but shouldn’t it be blue??
The original color associated with St. Patrick was blue but because the Saint preached about the Holy Trinity through the symbol of the shamrock and the Irish ‘little folk’ were also associated with green, it became the most common shade in connection with him. Parade committee organizers across the world wouldn’t take too kindly to us changing the colour now, so maybe we’ll leave it at green.

4. Saint Patrick banished the Snakes from Ireland
… and not a snake in sight. Patrick is said to have banished the snakes from Ireland but in fact, Ireland never had any snakes as the weather was too miserable for the cold-blooded reptiles. The banished snakes were thought to be symbolic of the pagan druid priests with whom Patrick might have had a few issues to iron out.

6. The resting place of Saint Patrick
Though never fully proven, Down Cathedral in the town of Downpatrick, Ireland, is thought to contain St. Patrick’s remains and, according to legend, he lies beside Saints Columcille and Brigit. Apparently he’s missing a few things like a jaw and a tooth but these can be seen in Dublin Museum.

7. Saint Patrick’s Relics
A few of the Saint’s relics can still be viewed in Ireland today: St. Patrick’s Bell and shrines of the Saint’s jaw and tooth can be viewed in Dublin National Museum while Patrick’s four gospels are held at the The Royal Irish Academy. Saint Patrick’s Crozier, with which he banished the imaginary snakes, was venerated for centuries in Dublins Christ Church only to be publically burned in 1538 under the orders of the archbishop, George Browne.

8. Drink, drink, and yet more drink!
The global corporate-relations director of Guinness says 5.5 million pints of Guinness are sold on any given day but this figure rises to an astounding 13 million on St. Patrick’s Day. IBISWorld also reports that Saint Patrick’s Day 2012 brought in $245 million in beer sales. Who’s up for making March 18 into International Hangover Day?

9. The Royal Dublin Dog Show was the place to be on St. Patrick’s Day.
Due to strict laws on the curtailment of sales of alcohol on Holy Days in Ireland, from 1927 to 1961, the only place a thirsty Irish person could legally get a drink on Paddy’s day was at The Royal Dublin Dog Show. One TD was reported to complain that it was a grand occasion “except for all the dogs.” At the time, the church and state were worried that the Irish would drink too much on the day.

10. And after all that, he’s not even Irish!
Saint Patrick was actually born in Roman Britain at the end of the 4th century AD and taken to Ireland by slavers as a teenager. The exact place of his birth is debatable as some say Scotland and some say Wales but, either way, he’s Irish now.