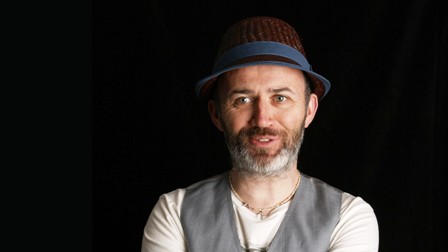 When Irish comedian Tommy Tiernan lands on Canadian shores next week, he will be returning to friendly and familiar grounds; audiences north of the 49th parallel adore him, and critics have been quick to praise his profound, and sometimes profane, perspective on life.

“There are few stand-ups on the planet – Louis C.K. and Lewis Black notwithstanding – who can match this Irish wit when he is on his game,” noted the Montreal Gazette.

“The Irish comedian’s success is huge,” added the Winnipeg Free Press. “The audiences that flock to his shows are huge. The scale of his touring – and worldwide popularity – are huge. Even the nicknames he attracts – like “the Bono of Irish comedy” – are the stuff of grandeur.”

Tiernan’s new show, entitled Whirlwind, is aptly named; the tour begins in St. John’s, Newfoundland on April 7, and closes on April 22 in Vancouver, British Columbia. En route, the comedian will entertain thousands of fans in 11 cities.

The 40-something funny man is equally adored in the U.K., the U.S.A., Australia and New Zealand. However, if last year’s sold-out Mega Stars of Comedy Gala at the Just For Laughs Comedy Festival in Montreal is any indication, Canada has embraced him wholeheartedly.

“Canadians have a brilliant sense of humour,” Tiernan tells Celtic Life International. “They understand the nuance and subtleties of comedy. Not that there is very much that is subtle about being Irish.

“That said,” he continues, “the crowds in Canada don’t come out to see me just because I’m Irish. Sure, there will always be the nostalgia factor for North Americans – you know, the older ex-pats who will go to anything with the word Ireland stamped on it – but that’s the exception rather than the rule for me and what I do.”

Not that he makes excuses for his roots.

“Look – I’m Irish, there is no way of escaping it, those are my roots and they are on display every time I take the stage. I don’t shy away from the fact that I come from where I do, but at the same time I don’t consider myself some sort of spokesperson or poster-child for my country. I am a stand-up comedian – I try to make people laugh. And it just so happens that the Irish are generally pretty good at that.”

Born in Carndonagh, County Donegal, Tiernan’s father is a native of County Kerry, and his mother is from County Limerick.

“At heart, I am a storyteller,” he explains. “You can blame that on my roots; gift of the gab and all that.”

As Canadians will soon see, it is part of Tiernan’s mandate to take risks that other humourists do not, often using a high-energy, non-apologetic delivery to challenge audiences.

“Sure, I’ve been known to push things a little too far on occasion,” he grins, devilishly. “But who ever said that being funny has to be bland and syrupy? All the great comedians – Lenny Bruce, Louis CK, Jerry Seinfield – have all used comedy to invite their audiences to see the world in a different light and to perhaps think about life in a new and exciting way.”

That fresh perspective has earned Tiernan popular and critical acclaim around the world over the last two decades, as well as a number of awards. And, in April 2009, he set the Guinness World Record for the longest stand-up comedy show by an individual, performing for a continuous 36 hours and 15 minutes at Nuns Island in his hometown of Galway on the Emerald Isle’s plush west coast.

“That’s the gift of the gab thing I mentioned earlier,” he jokes. “I’m pretty sure that’s an Irish thing. I don’t think I would have been able to set that record if I was from India or Japan.”