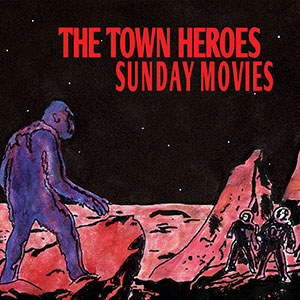 What do you get when you mash-up Scottish, Irish and French heritage, a guitar and a set of drums? One of Atlantic Canada’s most influential new alt-rock power duos, The Town Heroes. Recently we spoke with frontman Mike Ryan about the band’s past, present and future.

What is your own ethnic heritage?
I’m 25% Irish, 50% Scottish and 25% French. My band-mate, Bruce Gillis, comes from Campbell and Gillis genes so he’s a true Scotsman.

When and why did you start playing music?
I started playing music when I was about 13 years old. My father always listened to good, classic rock and I wanted to try to play along to Jimi Hendrix, Deep Purple and stuff like that. Once I started to play, I feel in love with the guitar. I started writing songs as soon as I knew a few chords, and it hasn’t stopped since then.

Are they the same reasons you do it today?
The love for music is definitely still as strong today as it ever was. I feel a need to be creative and capture the ideas I have, the things I’ve experienced, and my personal feelings in the form of song. Music is my job now, but at the root of it all is still a love for music and creativity.

When and how did the band come together?
Our band has been together for 3 years now. Myself and Bruce have played together in bands before this that all broke up for whatever reasons. Even after they disbanded, we never stopped jamming and writing so we decided that we’d try to tackle the musical world as a duo.

How has the band’s sound & style evolved over the years?
When we first started, writing rock songs for a two member group was a bit challenging. Having only drums, guitar and vocals to rely on, essentially changed the way that we wrote our songs. Rhythmically, we try to sync up the kick and snare with the strumming pattern on guitar. Our songs are usually short, and we typically have our hook in the vocal melody. There are definitely challenges that come from having only two people in the band: If either of us messes up, it can get pretty bad… there’s nothing to hide behind so we have to make sure we’re on top of our game.  We’ve been playing together for so long now though that we’ve developed all the same habits. We know where each other is going and work really well together. It’s definitely a challenge to try to sound like a full rock band with two people… but it’s a lot of fun, too.

What inspired the new recording, Sunday Movies?
I’m working on songs all the time. I write every day and use music as a means to tell stories about things I’ve experienced in life. The songs are typically very personal, yet, I want the listener to be able to hopefully find a grander meaning in them as well.  With this being said, I guess life itself, the things we all experience as humans, would be the inspiration for this album.

What were the challenges of putting it together?
The album happened over a relatively long period of time, two years. We didn’t want to rush it, we wanted to make something we were proud of. Throughout that process, the main challenges were getting the sounds we wanted. Whether it be the right performance, the right mic, the right instrument, the right room, we just wanted to make sure that, in the end, it was something we’d be happy with releasing.

What were the rewards?
Right away, the biggest reward was selling out our CD release show and playing the best show of our career. Having a packed, attentive, cheering room, singing along to your songs is as rewarding as it can possibly be get. Now, we’ll take it across the country and hope the rest of the nation responds in a positive way.

What has the response been like so far?
As mentioned above the response has been great so far. We had strangers tell us it’s their favorite album of the year and that really means a lot to us. We just want to keep working hard and play in front of as many people as we can to see how they respond.

What makes a good song?
After I hear a “good song” for the first time, it makes me feel like I’ve been missing that song in my life up until that point. It fills in a part inside of me that I didn’t realize was vacant.

Is your creative process more ‘inspirational’ or ‘perspirational’?
My creative process is certainly inspirational. I’m inspired every day and I try to take the things that inspire me and capture their essence in song.  I feel like it’s an artist’s responsibility to make sense of our emotions and give it back to the rest of the world in a relatable example. The only way, I think, to do this, is to write songs that are real, that are from your heart; and in that sense, writing about things that inspire you is the only way to capture that.

What does the band have on tap for 2014?
For 2014 we’ll promote our album in every way possible. We’ll be touring the country, heading overseas to play Finland, releasing a new music video for every song on the album, and work as hard as we can every day to improve as musicians. Somewhere in there we’ll probably record a new album, too.