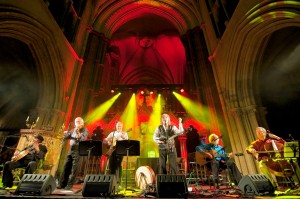 Now in its eighth year, Dublin’s Temple Bar TradFest is a favourite on the Irish festival calendar.

Organised by the Temple Bar Traders’ Association with the support of local businesses, the yearly musical celebration has proven to be a social, cultural and economic boon for the Irish capital since its inception.

He adds that the 2013 event has an international feel to it.

“As part of the country’s celebrations for The Gathering 2013, internationally renowned Irish artists living all over the world -England, Scotland, Spain, Poland, Latvia, America and Canada– have been invited to ‘come home’.

“We are actually kicking off the festival with an extraordinary Musical Gathering concert in Christ Church Cathedral, which will bring together some of the most progressive and influential traditional groups of the past fifteen years, including Karen Kasey, Donal O’ Connor, John Spillane, John McSherry, Lumiere, Muireann Nic Amhlaoibh and Donogh Hennessy.”

“In our headline concerts we have assembled a line-up of some of the most iconic figures in Irish traditional music coupled with some of the most exciting names in emerging Irish talent,” shares Hanrahan.

City Hall – considered one of Dublin’s most beautiful and iconic buildings – will be the scene of a series of intimate lunch-hour performances.

A string of evening concerts will celebrate Irish music and its influence in Europe, Canada, New York and London, and a special concert to mark Ireland’s presidency of the European Council in 2013 will feature artists from across the European continent.

TradFest will also see the world-premier of The De Cuellar Suite, a new composition written by Michael Rooney, featuring over 60 musicians and dancers fromIrelandand Galicia, Spain. This concert will celebrate the interconnectivity between Irish and Spanish culture.

A closing night spectacle will celebrate the unique contribution made by Barney McKenna to Irish traditional music. McKenna, who died in April, was widely acknowledged as one of the most important figures in the development of the tenor banjo in trad music and was a founding member of The Dubliners, with whom he played since the legendary band’s early days on stage at O’Donoghue’s Pub inDublinin the 1960s.

Families will not be disappointed with the festival either, says Hanrahan. “We have outdoor stages with an emphasis on young Irish music and dance talent; street entertainment and a children’s club are just some of the many free events taking place during the festival.

“I have no doubt that everyone will enjoy a truly exciting celebration of our culture.”