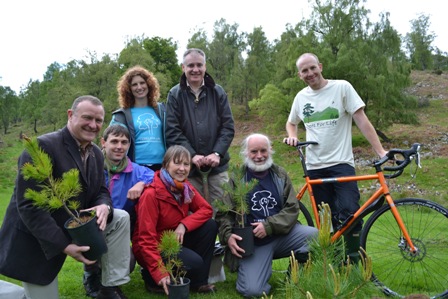 The Romans once called Scotland “Caledonia,” meaning “wooded heights.” Today that name is nothing if not ironic. The country’s native pinewoods, which formed the western-most outpost of Europe’s boreal forest, were once estimated to have covered 1.5 million hectares. It formed a vast, primordial wilderness of Scots pine, birch, rowan, aspen, juniper and other trees. But because of climate change and human exploitation, the Caledonian forest is almost a wisp of what it once was: overgrazing and the burning and felling of trees for timber have, at the end of the 20th century, turned Scotland into one of the least-forested countries in Europe.

Today, only a few isolated fragments of Caledonian forest remain, according to Becky Priestly, the marketing and communications office for Scotland’s Trees for Life. Trees for Life is a small charity that is trying to restore the forest, if not to its former glory, then at least to a point where the precipitous decline of the forest is halted. Much of what remains of the original forest is “geriatric,” composed of old trees reaching the end of their lifespans. Overgrazing from deer and sheep have prevented new trees from growing to take their place. And with the trees gone, so are all the large mammals which once roamed the forest.

At one time, the forest was home to wildlife such as the European beaver, wild boar and lynx as well as moose, brown bears and wolves. A long history of deforestation in Scotland has led to the demise of many of these species. Land clearance began as far back as Neolithic times when trees were cut for fuel and timber and taken down to clear the land for agriculture. As the forest shrank over the centuries, the human population grew, with some parts being burned deliberately to eradicate “vermin” such as wolves.

Only a tiny percentage of the original forests survive, while the native pinewoods exist only as 35 isolated remnants. Since 1989, with the help of thousands of volunteers, Trees for Life has been working to restore the Caledonian Forest. Now in its 26th year of operation, the organization plants trees, removes non-native species and fences seedlings to protect them from grazing animals. In 2012, the charity planted its one-millionth tree and hopes to establish another million by 2018.

Priestly said the charity has a growing membership which learns about the organization’s work through the magazine, Caledonia Wild! The magazine appears three times annually and features articles on the charity’s projects, what’s new at the group’s conservation estate at Dundreggan, and on the achievements of the volunteers. If people are inclined to become involved, they can volunteer for a conservation week and help plant trees and carry out what Priestly calls other practical conservation tasks at a number of scenic locations across the Scottish Highlands.

One upcoming opportunity for volunteers in November is the first ever conservation week on the Ben Damph Estate in Torrington in northwest Scotland. The privately owned estate has a large area of woodland and land that’s become overgrown with an invasive non-native rhododendron. A good level of fitness is necessary for the work as it can be arduous. The group’s work involves rescuing the choked trees and cutting down and removing as much of the rhododendron as possible.

In late May, the charity celebrated its 25th anniversary at the Dunddreggan estate, one of the organization’s long-term projects. The 10,000-acre estate has been described as a “lost world.” More than 3,000 species have been identified there so far, including 10 never before recorded in the UK.

“One of the easiest and most poignant ways to support our work is by dedicating a tree for someone or to mark a special event such as a birthday or a wedding,” Priestly notes. Individual trees may be bought for £5, or a grove of eight trees with a personalized web page to which family and friends can add dedications costs £50.