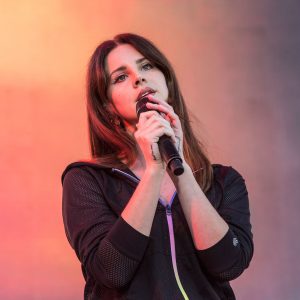 Lana Del Rey’s femme fatale persona might be all-American, but Celtic Life International has uncovered the USA-born singer’s taste for the Highlands.

Drawn to Scotland by her ex-boyfriend Barrie-James O’Neill (lead singer of indie band Kassidy) coupled with her Scottish/Anglo ancestry, it’s clear to see why Del Rey calls the isle her “second home.”

She is a keen supporter of the Scottish indie scene – with Kassidy, until recently, opening for her – and there are obvious parallels between her sound and that of the Scottish band Cocteau Twins.

Outside music and, if Instagram is anything to go by, the singer is proud to sport her Scottish/American heritage; she’s even been spotted donning a Celtic Football Club shirt. Her song National Anthem may be a lyrical vessel about money being the doctrine of success, but it seems Del Rey yearns to put down roots. Famously, when asked where she’d call her permanent home, Lana replied, “I don’t have one…but when I have any time I go to Glasgow, that’s where I’m happiest.”

Most of us know Elizabeth Woodridge Grant as her alter ego, Lana Del Rey. The singer’s cult following morphed into mainstream recognition around about 2012, when her second album, Born to Die, shot to the top of the UK charts. Since then, her sultry sound, pouted lips and enigmatic stage presence have seen her capture audiences worldwide, with her new material already becoming staple fixtures on most radio playlists. Closer to home, she’s hit the UK festival circuit and graced the Pyramid stage at this summer’s Glastonbury Festival.

Routinely provocative (it wasn’t so long ago that Del Rey fanned the flames of controversy by answering an interviewer with the statement “I wish I was dead already”), even the titles of her albums carry ominous undertones. She’s been lauded for her sensual voice, but scorned for her stylised image and mysterious backstory. The musical equivalent of Marmite, Del Rey’s tracks within both Born to Die and Ultraviolence seem saturated with the sense that happiness remains permanently just out of reach.

“I haven’t yet found that easy path towards happiness,” she says. “It’s been years since I’ve felt at peace. That’s been my theme in life: trudging the road to happiness. For me, there are moments of pure happiness, but you can’t achieve that over a sustained period of time…you try to make those moments as many as possible.”

Happiness for Del Rey “is not a static state” but instead a process, something that she actively pursues. “I have found that devoting your life to the people around you and caring for them is the true road to general happiness.”

Giving the ones you love your full attention must be hard when also dealing with the demands of being a globe-trotting pop star. Constantly on the move, Del Rey also rarely has time to pause and reflect on her increasing interest in spirituality.

“My life has gone through various incarnations and transitions,” she says. “I don’t consider myself to be someone very provocative or radical; I embrace a lot of traditional things. But I believe in alternative lifestyles and in alternative relationships.”

To Del Rey, being “transitional” frequently involves looking back.

“I think we’ve lost the kind of cultural and personal liberation that we were exploring in the ’60s when people were experiencing a new concept of freedom. That was a much more exciting notion than the freedom we talk about now.” 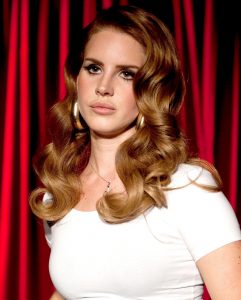 Today’s freedom might differ from that of the past, but Del Rey is a woman constantly seeking liberation from her own demons. For her, her personal and creative lives appear to go hand in hand and she’s experienced waves of musical and personal change since her teenage years.

“When I was 15 my parents sent me to a private boarding school in Connecticut so I could fight my addiction to alcohol. I had a very young teacher, Gene Campbell, who introduced me to hip hop. That set things in motion for me and my music evolved over the course of the next few years – especially after I moved to New York which was a very troubled time, but also very creative.”

Explaining that a lot of her music “is a reference to the feeling I had when I was inebriated” and the fact that her addiction to booze rapidly became destructive, it wasn’t just music, but faith, that motivated the younger Del Rey (back then, she was still plain Lizzie Grant). “I went to a school where Jesuits taught the philosophy classes. I was fascinated by the basic question of ‘why do we exist?’ I enjoyed thinking and talking to other people about basic questions like why we are how we are and what kind of meaning can we find in life.”

The words why and how still abound in Del Rey’s lyrics; she’s clearly a fan of multiple meanings. Take Ultraviolence’s title track, which features the lyrics “He hit me/And it felt like a kiss” or Cruel World and the cryptic phrase “Did what I had to do/ Cause it’s so far past me now.” Her philosophical musings are alive and well in the new album, so why the abruptly aggressive title Ultraviolence?

“I found the title before I had written almost any of the songs. I love the idea of having a one-word title because I think that has a beautiful simplicity. I was thinking of flowers at the time and since I love flowers that are shades of blue and violet I had this idea of ultraviolet and that kind of vibration.”

“Ultra is a sweet sound and completely opposite to the sense of violence. It also summarises some of the contradictions I find in myself. That my essence is sweet but I also have this violence in my life that I’ve experienced over the last four years.”

Telling us she’s in love with this record, she praises Dan Auerbach, The Black Keys’ guitarist and vocalist for its production. Their collaboration was spurred by a chance late-night meeting in a club. “He listened to the record and really liked it but thought it had too much of a classic-rock feel. But when I told him that I had this idea for a West Coast fusion with an underground jazz culture for the mood, he said he felt that he could deliver that. We went to Nashville and recorded everything live and it had a really good feel to it,” she recalls.

“Something Dan really tapped into was that all of my choruses slipped into half-time beats and half-time swings so he called it ‘narco-swing’ every time the ‘West Coast’ chorus would kick in and that’s a good description of it.”

The American west coast is also the site of her creative release. “Being in LA  has been an escape and I’ve been inspired by how casual everything is over there. I love to swim, I love going to the beach every day. I spend hours and hours during the week driving up and down the coast listening to music.”

Telling Celtic Life International that she’s inspired not only by the natural world but by the soundtracks of films past – “like American Beauty, The Godfather, Scarface” – she was thrilled to perform her own beautiful ballad Young and Beautiful in last year’s The Great Gatsby soundtrack. This year saw Angelina Jolie hand-pick her to sing Once Upon a Dream in the trailer for Maleficent. 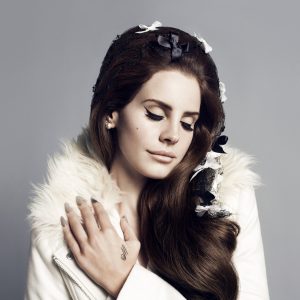 Del Rey speaks wearily of a busy year both commercially and creatively, with soundtracks recorded, festival routes conquered and an album to promote. A self-confessed “nocturnal creature,” she makes use of the twilight hours, working “either with the radio in my car playing or in my house and the TV turned on, usually chain-smoking and drinking coffee…I drink tons of coffee!”

It’s through working day and night that, at 28-years-old, Del Rey can call herself a transnational, globally-recognized musician. But does this tireless work ethic ever catch up with her? The singer pauses to think.

“I thought I saw something strange or a ghost while staying at a friend’s house recently. I swear to God these three apparitions appeared above this deck on Kingsland Road in London. I called 911 but I didn’t know at the time that 911 doesn’t work in England. I learned later that it was light coming from Chinese lanterns that people light up in the summer. It was really humiliating!”

With this, Lana Del Rey’s perfect poker face is transformed by a laugh and we can’t help but join her. The spooky anecdote doesn’t seem to fit the provocative, angsty image Del Rey normally exudes. But it proves that even musical megastars are sometimes afraid of the dark.