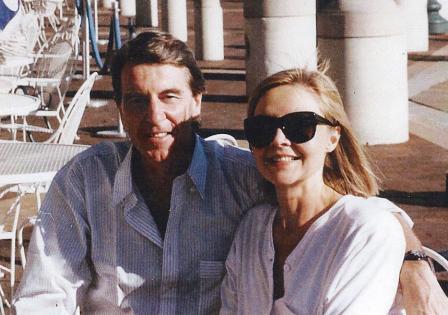 Scottish journalist and author Stewart Dickson left behind a literary legacy when he passed away in 2011. Recently we spoke with his wife Gunna Dickson about her husband, and his first novel Vair.

What inspired Stewart to become a writer?
Stewart was born and grew up in Leith, the port of Edinburgh, in Scotland. As a small boy, he dreamed of far-away places while hanging out at the docks, watching the ships on the North Sea arriving from Norway. As an impressionable teenager, he recalled Iceland Air planes landing on the tarmac, wings shaking in wintry gales, and tall blond uniformed flight attendants alighting from them, speaking in lilting accents. He was a keen observer, and for him it was all very exotic and fed his imagination. His flights of fancy led him to make up a story that, as an infant, he was stolen by Gypsies from Edinburgh Castle and given to a poor family in Leith. His mum was not amused, but he always felt he was destined for something more. His parents owned a news agents shop in Leith Walk and were not exactly poor. Stewart’s father, Joseph Wilson Dickson, was a well-read man who had great respect for books and put a high value on education. Joe aspired to become a barrister and it was a great disappointment for him that family circumstances, World War 2 and the RAF combined to dash his dream. Stewart loved visiting his grandfather James Orr. He could be gruff at times but he had a house full of books and always allowed Stewart to come in and read for hours on end.

Who were his favourite writers?
Wow…where to start. When Stewart and I met, I had two bookshelves, but that number soon grew to six and then eight.  My mother used to joke that if we got any more books, we would crash into the apartment below from the sheer weight of them. Represented on our shelves are Robert Louis Stevenson, Arthur Conan Doyle, Shakespeare, Graham Greene, Chaucer, P.D. James, P.G. Wodehouse and George MacDonald Fraser. There is also a collection of opera librettos, poetry books, atlases, anthologies, travel guides, dictionaries, genealogies, short stories, autobiographies and biographies (John Gotti, Douglas MacArthur, Queen Elizabeth, Hillary Clinton and Bill Clinton, Leon Panetta, Daniel Boone, Captain Kidd, Mary Queen of Scots, Roger Moore, Napoleon, Hitler, Hirohito, Mozart, Margaret Thatcher, David Coulthard…  It’s safe to say that I have even left some out.

What can you tell me about his creative process?
Stewart was never without a notebook and a pen. No matter where we were, he was scribbling notes. He drew inspiration from most anything he heard or observed. In our favorite NYC neighborhood restaurant/bar, Palm Too, he was always chatting with the wait staff, asking questions and making notes about Italy, local food and wines. He was a regular, always occupying the same spot at the bar, where a small brass plaque “Stewart’s Corner” is now affixed. He was a great conversationalist, storyteller and people magnet with a wicked sense of humor and could hold his own with millionaires, airline pilots, athletes, businessmen, musicians, lawyers and diplomatic and military personnel – all regulars, who came from all over the world. A boulevardier, he enjoyed people-watching at outdoor cafes.  As a foreign correspondent, Stewart got a world scoop for his London paper when he got Prince Edward to say “I’m Not Gay”. He traveled all over the world on assignments, covering presidential summits, the first Gulf War “Desert Storm” from the Pentagon, and Royal tours in the U.S. with Her Majesty, Prince Charles and Princess Diana. He wrote about the first test tube baby, celebrities and court cases, including heavyweight champ Mike Tyson’s rape trial and the beginning of the end of his own boss/publisher at the time, Robert Maxwell.

What motivated him to write Vair?
Stewart had a curious nature and was fascinated by history and the concept of time travel, so I suppose that is why he chose to write a historical thriller that incorporates modern and historic events. He sets the story in places he knew well and uses some of his own professional experiences as well as letting his imagination run wild. Many of the characters are drawn from friends and people he knew, and some of the names as well, but not necessarily matched up.

What has the response been like from those that have read it?
VAIR has been described by friends and readers as spellbinding, gripping and intriguing, “a taut thriller written with an effortless and descriptive style reminiscent of Fleming or Doyle,” a compelling mixture of current times, history and religion. Also as “Dan Brown meets Stieg Larssen” with “a plot that will stun the most savvy sleuths.”

Did he have plans for a sequel, or another book?
I believe he left the door open for one, or more.

The book would make a great film – was that something he considered?
Absolutely, yes. Stewart’s descriptive writing style is very visual and the locales and characters are rich and varied, with universal appeal.