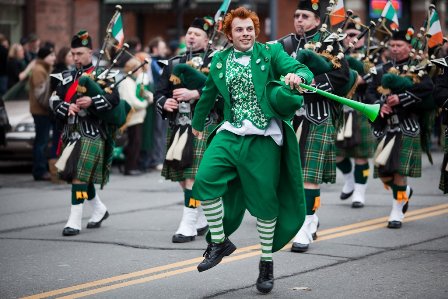 Western Canada’s biggest Celtic Festival kicks-off today in Vancouver, BC. Director of Programming and Production Ross Powell tells us what attendees can expect over the next 9 days.

What are your roles and responsibilities with the event?
As Director of Programming I am responsible with booking all the talent for the festival, from the headliners to the street entertainers. This includes organizing any travel and accommodation necessary. As Director of Production I am responsible for organizing technical production of all the events and venues, from the theatres to the free stages and Celtic Village & Street Market and the St. Patrick’s Day Parade.

What is the event’s core mandate?
The Society’s mission is to bring together the local community in an annual festival celebration of Celtic Culture and the St. Patrick’s Day Parade; deliver education on global Celtic heritage, art and cultural traditions; promote and showcase local and international Celtic music, dance, spoken word, theatre, film, art, crafts, food/beverage and sports. But there is a secondary very important mission which is to party to some truly awesome Celtic music.

How has it grown over the years?
The St, Patrick’s Day Parade has grown in participants and attendees. The Celtic Village and Street Market that we set up on Granville Street on the weekend of the parade gets bigger and better attended as well; this year we expanded the Village to Robson Square so we had a good staging area for our new Community Stage where we will be featuring dance and workshops all weekend. Two years ago we expanded the festival to include the weekend before the parade with our free kick-off event at the Village on False Creek the Saturday before, and both last year and this we have a show that night; this year featuring a hot new band from Ireland; Hermitage Green

Who attends the gathering?
Just Celts. No I’m kidding, everyone of all ages and heritages will enjoy this festival. It’s just a lot of fun.

What can they expect to experience this year?
Our usual fare is a great weekend of free fun in downtown Vancouver, the parade, afternoons full of music at the free stage in the Village and some excellent concerts. This year, our 10th festival, we have some special concerts including our Gala with four great acts. We also have our new Community Stage that will allow us for the first time to present some dance on a stage where folks will be better able to view the act. There are also a couple of public participation events on that stage that people should check out.

Why is it an important event for the Celtic community there?
CFV is the biggest Celtic festival in Western Canada. Our hope is that we will more and more tie the various Celtic groups together in the kinship of this festival.

What are the plans for the event in the years ahead?
There are so many different things we would like to do I don’t know where to start. More dance, at an indoor venue. We have plans for more concerts in the future, of greater variety. Celtic music spans a huge range, from traditional though Celtic-Folk, Celtic-Rock, into experimental realms and various fusions. We would like to touch on all of these. There are some sporting events we would like to do, Celtic History and Art displays and workshops, a beer-garden…

Is enough being done to preserve and promote Celtic culture?
Probably not. I’ll bet there are probably people out there who don’t even know they are Celts or partly Celt. They might consider themselves English, for instance, and not even know that they have Celtic blood. There has been a ton of interbreeding in the long years since the Angles and Saxons kicked Celtic butt and took over.

What can we be doing better?
Drink more green beer. Seriously everyone needs to work harder on getting in touch with their inner Celt. Look at Toddish McWong, who runs the Gung Haggis Fat Choy celebration. He’s done so and he’s Asian!