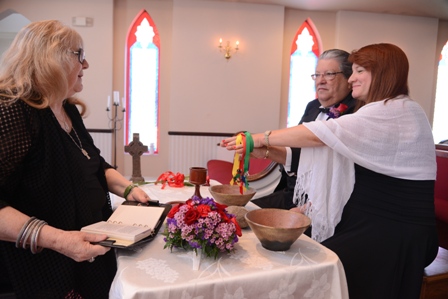 Bride Eileen Corona-Venturi adored everything about her Celtic-themed wedding in Vegas, but her bridal bouquet, composed of rich purples, greens and reds designed to mimic the colors of the Scottish Highlands, struck her as especially lovely. “It was probably the most beautiful bouquet I’ve ever seen,” said Corona-Venturi.

Corona-Venturi married William Venturi in Las Vegas in May 2012, after eloping in order to have a quiet ceremony. “We’d both been married before and we didn’t want a big wedding. We wanted something intimate, just for the two of us, so we went to Vegas,” said Corona-Venturi, who calls Florida home.

It might seem odd to travel to Vegas to ensure a quiet wedding, but the glamorous desert city offers just about every conceivable wedding option. Nevada is an easy state in which to acquire a marriage license and it is also a relatively cheap place to wed. As a result, the Vegas wedding scene has grown up alongside the city’s entertainment industry. Vegas hosts around 115,000 weddings a year, and a small number of them are Celtic-themed.

The big, plush hotel venues will arrange most things if asked, but Reverend Aurore Leigh Barrett, who married Corona-Venturi and her husband, specializes in Celtic weddings, and will hold them in diverse locations from peaceful chapels to the dramatic Valley of Fire, named for its ancient red sandstone formations.

Couples can choose ceremonies that are both non-religious and Christian. The Christian variety incorporates traditional verses such as St. Paul’s hymn to love and the Lord’s Prayer. Reverend Aurore also includes Native American verses, such as the Apache wedding prayer. Both ceremonies feature traditional elements such as hand fasting (the binding of the couple’s hands with a cord) and the passing of the tartan sash. Symbolic elements include: water, which represents woman; stone symbolizing man; and earth, the symbol of the altar. The bridal couple drink from an anam cara or soul friend cup.

Reverend Aurore has been offering her Celtic weddings for 10 years and aims to make them intimate and meaningful. Her ceremonies last around 20 minutes, unlike many Vegas weddings which can be over in as little as five.

“I love Celtic history and everything Celtic,” she said. “I started studying Celtic beliefs in my late teens and instantly felt a connection to the nature worship and sense of gratitude and thankfulness inherent in Celtic culture.”

Reverend Aurore marries many couples from the Celtic nations, some of them drawn by the relatively low cost of these weddings — the Valley of Fire is the most expensive venue and costs about $1,500. Couples also like the proximity to Sin City’s many attractions.

For Corona-Venturi, a Celtic wedding appealed because both her parents were born in Ireland. She and her husband chose to marry in the Tuscan-style chapel. “The ceremony was unbelievable,” said Corona-Venturi. “The way Reverend Aurore brought the different elements together, like handfasting and prayers, was very moving.”

English newlyweds Patricia Massey and David Carpenter-Clawson were also married by Reverend Aurore, after choosing Vegas because the scattered English and American branches of their family wished to visit the city.

At first, Carpenter-Clawson had reservations about marrying in Vegas, but was pleased to discover that she could be married in the beautiful church at St. Jude’s Ranch and that her fee would go straight to the welfare of homeless youth in the city.

“Reverend Aurore designed a wonderful ceremony for us in October 2012,” she said. “It was personal, meaningful and moving. All our family was included. We felt in tune with each other, our family and friends because of the ancient marriage rites. The ceremony was grounded in love and in essence Christian. It was unforgettable.”

In order to keep elements of mystery and surprise, Reverend Aurore doesn’t inform couples of the exact details of their ceremony in advance. “I don’t release details of the wedding ceremony ahead of time. I want them to listen to the words of the ceremony,” she said. “The best thing they can do is show up and not be concerned – just let it happen.”  ~ By Carol Moreira