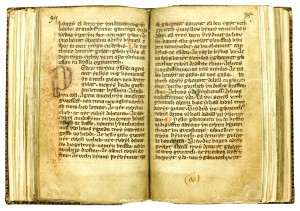 There was excitement in Wales this summer when a rare medieval document – the Boston Manuscript of the Laws of Hywel Dda – was purchased by the National Library of Wales after a successful bid at Sotheby’s auction house in London. Acquired for £541,250 (about $866,000), the purchase has allowed a national treasure to return home after two centuries in America.

Speaking from the Library’s elegant home on Penglais Hill above the town of Aberystwyth, manuscripts librarian Dr. Maredudd ap Huw said the unusual pocket-sized manuscript reflects actual legal practice during the second half of the 14th century.

“Judging by the interest in the manuscript, both online and from an increase in visitors to the Library, the Welsh people are delighted to see the manuscript returning to Wales,” the librarian said, a smile in his voice.

The National Library contains masses of information about Wales and the world that users can access for free. The spacious building on the hill houses millions of books, thousands of manuscripts and archives, maps, pictures and photos, films and music and electronic information.

So why are the Welsh so pleased to regain a little book written in medieval Welsh? It’s because the volume contains handwritten notes made by the itinerant judge who used it while working in South Wales. Such notes are rare among Welsh medieval manuscripts and will allow academics to peer through time into the development of Welsh identity.

The term the Laws of Hywel Dda does not relate solely to this book – it describes the native Welsh laws, practiced in Wales before the 16th century, and collected and arranged in the 10th century. The laws were first written down by Hywel Dda, a Welsh king (known as Hywel the Good in English), between 942 and 950 when he ruled most of the country.

Hywel was known for his compassion and good sense. It’s believed that while codifying the laws, his staff adapted existing laws, so some parts of the legislation probably pre-date Hywel’s own era.

Today, the Laws of Hywel Dda are contained in about 30 manuscripts dating from the 13th to 16th centuries and written in Welsh and Latin.

The Boston book is one of the earliest manuscripts of its kind ever offered in a public sale. It was sold by the Massachusetts Historical Society, which was probably given the manuscript by Welsh emigrants early in the 19th century.

Dr. Manon Williams, Chair of the Heritage Lottery Fund, which along with the Welsh Government helped the Library purchase the manuscript, described the book as “one of Wales’ true treasures”.

Now it is back in Wales, experts will interpret it, allowing it to be better understood.

“I hope local people and visitors will take this unique opportunity to come and see this important piece of Welsh history,” Williams said.

The manuscript did initially attract a large crowd to the Library’s Hengwrt Room, the gallery for exhibiting rare books and manuscripts, where it was displayed until the end of August. Now, conservators will begin preserving its fragile pages.

Replicas will then be created for permanent viewing and the manuscript will be digitized to provide worldwide access. A program of education and volunteering opportunities as well as a touring exhibition are also being planned.