WALES DAY 1; By the Numbers 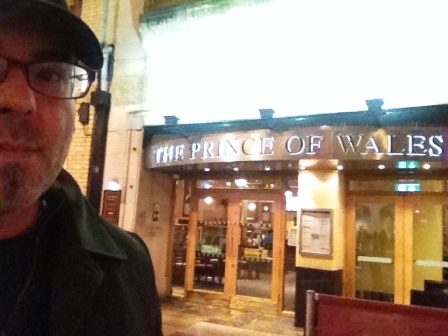 If the journey is the destination, then a trek to Wales makes for a myriad of memorable moments. The numbers don’t lie.

In the last 24 hours I have taken 6 types of transportation over 5 time zones, sleeping all of 180 minutes. With 25% of my travel time at 35, 000 feet over the Atlantic Ocean aboard a Boeing 777, I squeezed in 60 seconds to add up the distance covered.

Oh, and this doesn’t include the ride to Halifax Airport, nor the vast expanses of terrain covered in both Pearson Airport in Toronto and London’s Heathrow, shuffling from terminal to terminal in a maniacal maze of escalators, elevators and powered walkways. Nor does it tally the 40kms on the “tube” from Heathrow to central London where I catch my train to Cardiff.

And while statistics of this size will undoubtedly serve up great stories, they only tell part of the tale. As any traveler will note, it is the people one meets en route that bring the narrative to life.

In 2012, Kevyn Reed lost his 84 year-old grandmother Iris. Originally from Cardiff, Iris and her family immigrated to Lynchburg, Virginia in 1940, when Hitler began bombing Wales.

“As a young girl, she had promised herself that she would one day return to the place of her birth,” he explains on the transatlantic flight. “She never did make it back, but she made me promise in her last weeks that I would get there. And here I am.”

Now 36, Kevyn has been researching his roots for the last 2 years.

“I have seen some family photographs from that time and I’ve read dozens of old letters, so I have a sense of what it was like for her to have grown up there,” he shares. “And the internet has been a great tool as well, but I don’t think I will have a full understanding and appreciation of it all – and maybe some closure also – until I experience it in person.”

Similarly, Martin and Barbara Baines of Kingston, Ontario are here on a mission.

“Both of us have Welsh ancestry,” explains Martin on the train from London. “We actually honeymooned here in 1974, but we haven’t been able to make it back since then.”

With both children now out of the house, and a little extra time and disposable income on their hands, the couple thought the time was right to return.

“My own family roots here go back over 300 years,” he continues. “Apparently I still have cousins all over the country whom I’ve never met. I’m fascinated with the history of it all, especially the old homesteads.”

His wife has other reasons for wanting to revisit.

“We celebrated our 40th wedding anniversary this year,” smiles Barbara, whose maiden name is Ellis. “My memories of Wales, and of Cardiff in particular, are very romantic.”

As the train pulls into the capital city under a light drizzle, it is easy to understand the appeal.

Like her sister cities – Dublin, Belfast, Glasgow and Edinburgh – Cardiff is a study of past and present; classic and contemporary cultures co-exist, complimenting – instead of complicating – one another. It offers, most perhaps like Belfast in that regard, the best of both worlds.

Unlike the lively Irish, however, or the fiercely proud Scots, or even the chatty English with whom they have enjoyed a longstanding relationship – the Welsh are not easy to define.

But that  is why I am in Wales; in search of something that goes well beyond mere numbers, I am here to discover the heart, spirit and soul of a great Celtic nation via its people.