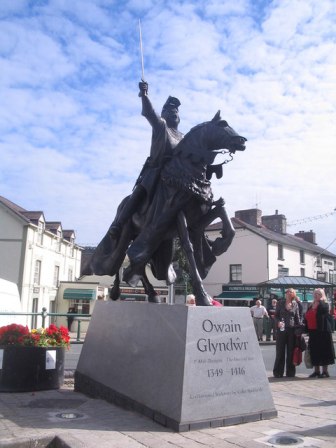 Scotland has William Wallace. The Irish have Daniel O’Connell. As for the Welsh…

Never heard of him? You’re not alone – most people haven’t. There have been no box-office block-buster movies made of his life, no bestselling biographies, no annual main-street parades or celebrations in major cities around the world.

In fact, outside of Wales, and aside from online, you’d be hard-pressed to find any information about the father of Welsh nationalism. His story, however, is as important to the preservation of Celtic culture as those of Wallace or O’Connell.

Born in the mid-1300s into an affluent Anglo-Welsh family, Glyndŵr studied law and later joined the English military. Resigning from service in his forties, he returned to Wales and retired to his family estates. A land dispute with his neighbor – an Englishman – led Glyndŵr to petition the courts in London. When the case was dismissed outright, he took the slight as a slap to the face of all Welshmen.

By 1400, Glyndŵr had gathered supporters and together they rose-up against the tyrannical King Henry IV. Over the next two years, the raggle-taggle band of rebels scored several strategic victories against the oppressors, eventually winning control of the northern and central regions of Wales. The following year, his efforts inspired Welshmen from across the country to revolt, and in 1404 Glyndŵr called his first Parliament at Powys in western Wales, declaring an independent Welsh state, sharing his vision for the country, and naming himself the first Prince of Wales.

A tactical alliance with France followed, and soon the English were being attacked from all sides. After the French turned their attention back to domestic issues, King Henry IV changed tactics by cutting off the insurgent food and arms supply lines. The ploy worked; the rebel forces were depleted and demoralized, with only a few final skirmishes taking place over the next half-decade, including one, sadly, that resulted in the loss of Glyndŵr’s wife and two daughters.

By 1412, the country’s “Last War of Independence” had come to a close, and Glyndŵr retreated to the Welsh countryside, rarely to be seen or heard from again.

It would be easy to dismiss his efforts as foolhardy or tragic, but the evidence of Glyndŵr’s enormous contributions to the preservation of a Welsh identity have proved to be enduring.

It is there in Ceredigion, home to both the National Library of Wales and Aberystwyth University – each guardians of the Welsh language; in Machynlleth, where the Welsh flag flies high from every home and business; in Abermaw, where youngsters sport their national team jersey on the rugby pitch; in Portmerion, where a middle-class architect designed a major tourist attraction that draws thousands each year; in Caernarfon, where an enemy’s medieval castle is an ever-present reminder of past struggles; in Llanelli, where this year’s National Eisteddfod brought Welsh of all ages together for 9 days of homegrown culture; in Colwyn Bay, where a bakery has been serving up hot, homemade Welsh Cakes for over 2 centuries; in Holyhead, where a ferry connects Celtic cousins across the Irish Sea; in Tregaron, where a young mother and father encourage their 5 year-old son to say diolch i chi.

And, it is here – in Dolydd on a stormy Monday night, where books of Welsh prose and poetry stack the shelves of a small cottage.

Acknowledgement and recognition of Glyndŵr’s sacrifices finally came in the late 19th century, courtesy of the newly-formed ‘Young Wales Movement’. He has since been celebrated by local, regional and national politicians, religious leaders, scholars, military figures and the like, and recently placed 2nd in a poll of 100 Welsh Heroes.

Ultimately, it is the impact on the everyday lives of everyday people here in Wales that is Glyndŵr’s greatest legacy – a quiet pride that permeates all.