Wales’ Moment in the Sun 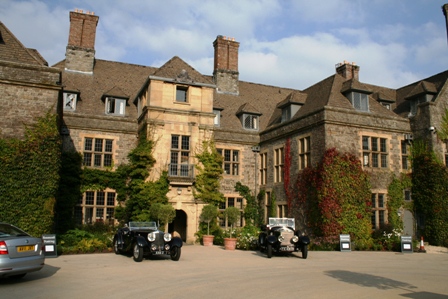 As Celtic Life International contributor Gerald Herter explains, before last year’s NATO Summit, Wales was, for many, just the little known appendage attached to the side of England.

That said, the Welsh people lay claim to a colourful and violent past. Yet unlike the drama that has characterized Scotland and Northern Ireland lately, Wales has proved to be the more stable member of the United Kingdom in recent times.

Determined to welcome the world with a display of pride and confidence, the people of Wales came well prepared for their brief moment in the spotlight.

Two days before the NATO world leaders’ dinner at Cardiff Castle, my wife Lori and I were enjoying tea in the seventh floor lounge of the Hilton Hotel across the street. From the broad lounge windows, we felt like we could almost reach out and touch the striking 11th century castle looming large in the sunlight.

But what stood out even more from our vantage point were the ever present police in their striking yellow vests. On the sidewalk, patrolmen strode in pairs at 50-yard intervals. On the street, motorcycle teams of six zoomed by every few minutes, as well as frequent squad cars and troopers on horseback. Officers peered out from atop the castle tower, while their colleagues swarmed the grounds like bright ants among the tourists.

When we planned our trip to Wales nine months earlier, we had no idea our visit would coincide with the summit of the 28 NATO country leaders. Even as we toured the castle’s ornate banqueting hall earlier in the afternoon, the guide made no mention that the likes of President Barack Obama, British Prime Minister David Cameron, and German Chancellor Angela Merkel would soon gather for a historic meal in this storied room.

Our peaceful afternoon tea was disrupted suddenly as three vested police officers strode into the hotel lounge, metal detectors in hand. They proceeded to meticulously screen around every chair and above each ceiling tile for nefarious devices. Like all the police we encountered in Cardiff that week, these were a friendly, yet professional bunch, hailing from all parts of Britain. “There are ten thousand of us here,” one officer from Herefordshire mentioned proudly. I asked who was minding their hometowns while they were here. “Other officers are called upon to step up,” he replied matter-of-factly.

Later we walked down by the Cardiff waterfront, which the Welsh have developed into a bustling centre for tourist activity. The modern Millennium Centre and slate-covered National Assembly Building stood out next to classical structures, like the red brick Pierhead building that reflected Wales’ maritime past.

Lori spotted an attractive pin in a tiny gift shop nearby that she had to have. We sensed excitement in the sales clerk’s voice as we talked with her.

“The warships are starting to come in. Have you seen them by the dock?” She pointed toward the left side of the harbour, behind a historic Norwegian church built for sailors a couple of centuries ago. “President Obama will be spending his nights on one of the ships during the NATO Summit.” She was looking forward to having a great vantage point watching for him, since her apartment is on the top floor of a building overlooking the harbour. She also alerted us to various security measures, such as street closings and a complete planned shutdown and rebooting of all area computer networks just before the Summit.

When we got to the dock, 100 people crowded the fence in front of the first British warship to arrive, while a reporter and cameraman broadcast the news. We observed added security measures. Small boats laden with police dotted the harbour. Along with foot and motorcycle police patrols, now pairs of military types with assault weapons watched vigilantly.

“Cardiff must be the safest place to be this week,” I mentioned to Lori as we returned to our hotel. Stepping out of the elevator at our floor, yet another policeman, seated by the door keeping watch, greeted us as we walked by.

“Since the Summit starts tomorrow, we had better leave early to avoid the expected traffic delays,” Lori suggested. I agreed as I consulted the map. Our planned driving route, on the M4 motorway up toward Tintern Abbey, passed close to nearby Newport, the site of the Summit meetings at the Celtic Manor Resort.

We held our breath the next morning, but managed to avoid street closures and the protestors anticipated by the castle. Even so, we knew our presence was observed along the motorway. On every overpass between Cardiff and Newport, police closely eyed all vehicles moving by.

Turning at last onto the local road that led to the Wye River Valley, we breathed a sigh of relief. The peaceful, bucolic charm of this scenic rural corner of Wales proved a welcome contrast to the armed camp atmosphere in Cardiff.

Set amongst rolling green hills, the extensive 12th century Abbey ruins exuded a silent strength even now. A walk through the remaining gothic structures, their past grandeur described on aptly placed plaques, helped us grasp the extent of the sophisticated community that flourished here so long ago.

We continued along the Wye River to the sumptuous Langoed Hall country house hotel, our home for the next two nights. Once owned by the husband of Laura Ashley, the hotel is richly furnished with fabrics from her collection. Well attended to by watchful servants, we could now relax in the serene countryside of Wales.

But one last reminder of the NATO Summit remained. We noticed that several of the parking spots in front of the hotel were reserved for the UAE. Upon querying the staff, we were told that the United Arab Emirates representatives to the Summit were staying at Llangoed Hall.

The following day after a walk by the Wye River behind the hotel, we turned on the TV in time to see President Obama speaking as he readied to depart.

“I want to thank the people of Newport and Cardiff and the people of Wales for welcoming me and my delegation so warmly. It’s a great honour to be the first sitting U.S. President to visit Wales…Thank you very much, people of Wales. I’ve had a wonderful time.”

We were pleased for our new found friends, the Welsh people. They had done themselves proud and shown the world and us genuine hospitality.