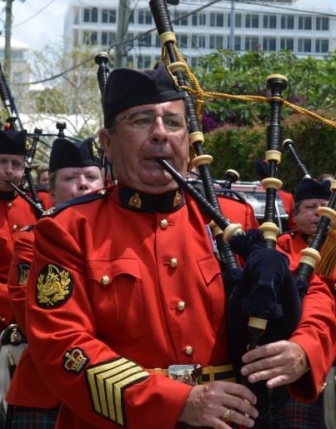 Like many before him, Wayne Moug wanted to play the drums but ended up with the bagpipes instead. He first began taking chanter lessons in 1968. It was between soccer and hockey season and, as he recalls, “I was moping around the house complaining about having nothing to do.” His mother shooed him out of the house, telling him a chap down at the local legion was setting up a pipe band and that he should go and check it out. Moug headed down with the intention of learning to play the drums, but by the time he arrived the drum class was full and instead he was persuaded to pick up the chanter.

It turned out to be a good decision, and the Nova Scotia resident has had a long and fruitful relationship with the pipes since then. Competitively, he played for the Halifax Police Association Pipes and Drums, which placed second in Grade 3 at the World Pipe Band Championships in 1989. The same group also won a number of other awards, including best overseas band and best drum corps. Later, Moug instructed and played with the Dartmouth Junior Pipe Band, which won many regional and national awards during the 1990s and 2000s. “The real highlight with both these bands was helping them progress through the grade levels and seeing the youngsters develop into highly proficient players,” he says.

Non-competitively, the 59-year-old has also enjoyed many highlights as a piper. At the opening and closing ceremonies of the Olympic sailing events in Kingston, Ontario, he was the solo piper. And he participated with the RCMP Pipes and Drums at the 2009 Royal Windsor Tattoo in England, where the RCMP presented a horse named George to HRH Queen Elizabeth. “The neat thing about the event was that we were billeted right in Windsor Castle,” Moug remembers.

Although he is currently retired from his career as an interpretation specialist and military curator with Parks Canada, Moug is far from idle. He is the director of Pipes and Drums for the Royal Nova Scotia International Tattoo, as well as a volunteer for a number of piping-related organizations. Moug first became involved with the Tattoo in 1981 while working at the Halifax Citadel National Historic Site. At that time, some of the site’s costumed interpreters were used in some of the stage scenes. Subsequently, he took part as a piper with his band, as a liaison officer for visiting bands and as a consultant to the costume department.

Moug’s father is a Scot who emigrated to Canada in 1952. “Although an unusual surname, we have been able to trace the family back to the mid-1500s in Scotland,” he comments. “I think there is little doubt that Moug is an evolution of another name and theories abound as to its origin.”

Overall, Moug notes, the state of piping appears to be in good shape. “When chatting with piping friends of the same era, we often comment as to how much better piping, especially band piping, is now then when we started. More and more great players are emerging and often at a younger age.”