WE ARE NORTHERN LIGHTS 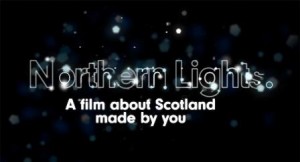 Following a phenomenally successful premiere at Glasgow Film Festival, and a tour of the Scottish regions, the mass participation, feature length documentary We Are Northern Lights will be screened at two exclusive previews tomorrow night in New York City as part of Tartan Week celebrations.

The result of the first ever crowd-sourced film project in this country, We Are Northern Lights shows Scots and Scotland refracted through a myriad of different lenses – those of the Scots themselves.

Audience reception in Scotland was overwhelmingly positive. Responses included “uplifting”, “inspiring”, “poetic”, “representative” and “wow” with many admitting to moments when they had tears in their eyes.

Now with the support of the University of Edinburgh in association with the American-Scottish Foundation, American audiences will get the chance to see what the Scots think of their own country. Both screenings will take place on April 11th at the landmark Bryant Park Hotel in Manhattan and will be followed by Q&A sessions with WANL Creative Director and Edinburgh University senior lecturer, Dr Nick Higgins, who will be talking about the journey from idea to realization, reception and beyond.

We Are Northern Lights is the culmination of a process that began during the Year of Creative Scotland, which asked the people of Scotland to capture their unique perspectives on film and submit them for selection. To ensure that the project was accessible to all, 55 workshops took place up and down the country, with entertaining, ‘how-to’ online video tutorials provided by Scottish Asian comedian, writer and actor Sanjeev Kohli. The resulting film is a unique, kaleidoscopic documentary portrait of Scotland in 2012.

Scottish Government Culture Secretary, Fiona Hyslop, said: “We Are Northern Lights presents a fantastic insight into modern day Scotland. It shows what can be achieved when the individual creative impulses of people from across Scotland are brought together.

To me, it has set a standard for cultural projects – it’s reached out to our diverse communities and inspired them to think about how they can use culture and creativity – not only to promote their local identity but to enhance community engagement. I am sure that everyone involved is very proud.”

Over 1500 submissions were received. The resulting 300 hours of footage took five months to edit into a 98-minute feature, with Nick working alongside the highly experienced film editor Colin Monie (Midnight’s Children, Neds).

The final film features footage from 121 ‘co-directors’ from all over the country and from all walks of life. The musical score was mostly created with selections from 200 original music submissions, also crowd-sourced from members of the public.

The result is a sweeping, compelling, multi-faceted self-portrait that arrives at a decisive period in the country’s history. From midges to multi-stories, Tweed to T in the Park, Skara Brae to wind turbines via the Dalai Lama and Donald Trump, this is Scotland’s story by the Scots. The challenges of living in Scotland are not ignored but the finished film is notable for its dry wit. More cheery than chippy, concerned with issues rather than image, this is the combined response of a people that take huge delight in their country.

The Northern Lights Project comes at a time when Scotland stands poised to take the most momentous decision in its history. At a time when the country is asking: “who are we?” the film seeks to answer that question by letting the Scots speak for themselves.

Filmmaker and academic Dr Nick Higgins originated, produced and directed the year-long project. He said: “We wanted to make the Project as accessible as possible, so we encouraged people to submit footage from their camera phones or even their home computers. And if they didn’t have a camera we would lend them one. We ran workshops with people from communities not normally included in projects of this nature, from Govanhill in Glasgow to the Isle of Luing, and if they couldn’t make it to a workshop we posted all our resources online.

“The result was incredible and at times overwhelming, with over 50,000 people visiting our website, resulting in over 300 hours of video footage.”

Iain Munro, Director of Creative Development, Creative Scotland, said: “We Are Northern Lights is the culmination of an exciting project supported by Creative Scotland as part of the Year of Creative Scotland. People across the country have risen to the opportunity to present their own stories and views and the final film is a funny, moving, unique portrait of Scotland. Congratulations to the 121 co-directors whose work makes up the film.”

Nick commented: “It was a hugely gratifying experience to receive so many submissions of such great quality. Whilst individually the videos might not be considered of national importance, collectively they combine to create something truly original and inspiring.

“We’re delighted to be able to share it with our American cousins – it’s an authentic, updated and upbeat version of Scotland that is at the same time both new and instantly recognizable.”