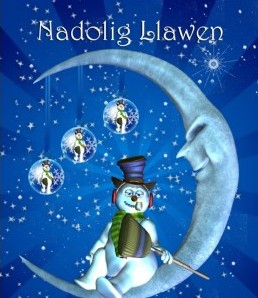 Plygain is unique to Wales, and fits well the nation of songsters. ‘Plygain’ means ‘Cockcrow’. This service took the place of the Cockcrow Mass, or what we call, Dawn Mass early on Christmas Morning. Many of the carols and songs are very old indeed, and the music is pure polyphonic harmony, traditionally sung by men and without accompaniment, though this is changing now. During Christmas night, the women stayed at home, baking, and the men went off to their chapel and sang hymns, secular songs and read psalms and bible readings. During the long night the women also made ‘Taffy’ a treacle toffee, and played divining games. But that is the old tradition, probably dating back to the 17th century. In the 19th century there are accounts of women and children joining their menfolk at the Plygain service, and decorating the church with beautifully decorated candles.

The Grey Mare visited houses throughout Wales well into the 1960’s. Then it began to die out as another rough custom. The Men would dress in disguise, and accompany the Mare, which was a horse’s skull, covered with a sheet, bedecked with ribbons. This sheet would be long enough to cover the operator, who would click the jaws together by means of a wooden pulley.

The custom is ancient, and has its roots in other pre-Christian customs. The ritual was that the group would visit each house, giving a challenge in verse, to enter the house and bring their luck. It was extremely unlucky to refuse the Mari Lwyd, but the clever householder could occasionally outwit and out-verse the entourage in this challenge and answer game. It was carried on until one could no longer think of a good answer, then the Mari Lwyd either gave its blessing and went away, or was granted entrance. Once inside the group would entertain the household, in return for food and drink.

This by all accounts worked well in the early evening, or with temperate groups, but some drank too much, and it spoilt the occasion, alarmed the children , and annoyed the adults, which is why it died out in most areas.

In the 3rd and 4th centuries, Christianised Romans colonized Britain as they came with the legions of soldiers, as part of the government of Britain. They brought with them many customs from Italy and the Mediterranean. One of these was the giving of Olive Branches as a New Year Peace gift. The original branches always came from the sacred groves of the Roman goddess, Strenia. To give one was a wish for peace and prosperity for the coming year, and a way of saying sorry if you had an old argument or had wronged someone. From this we get the phrase ‘To offer an Olive Branch’ when we want to say sorry with a gift of some kind.

As Christianity spread its influence, the reason behind the custom was lost, other than it was a symbol of good luck. In areas of Britain, along the English & Welsh Borders, in areas which were settled by the Romans, the Calenigg is still given between Christmas and New Year. This is an apple, with three twig legs. It is stuck with almonds, and a small spray of evergreens are stuck into the top around the stalk. Now it is children who carry the gift around, singing their carol, and getting a few small cakes or pennies in return for their ‘lucky Calenigg’. Householders put them in their windows, or on a shelf, and sometimes they shrivel but last all year. The ‘luck’ lasts as long as the Calenigg lasts.

Pierce small slits in the flesh of the apple – just enough to slip the almonds into firmly. Put these all around, so the apple looks spiky all over. Make three slits for the three sticks at the base of the apple, so that it will stand on its stick legs (like a three legged stool!)

Force a small candle (Christmas-tree size) into the top of the apple, tie a piece of baby ribbon in a nice bright colour such as red, into a bow around base of the candle. Then stick the three branches of evergreen into the top of the apple around the candle. With a paintbrush, brush the almonds with bitter almond oil or essence. And there you have a Christmas decoration dating from the 4th century Roman Britain.