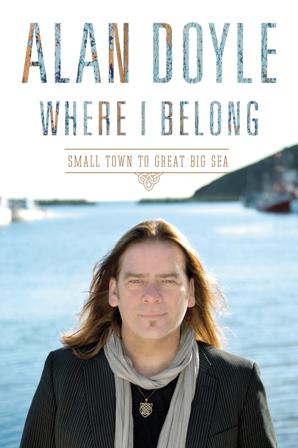 “Everything is wee bit upside down and ass-backwards.”

Alan Doyle is laughing over the phone from Toronto, where the renowned singer-songwriter has been touring his first book, the autobiographical Where I Belong.

“What I mean is that I have to get up early these days,” jokes the former frontman for Canadian minstrels Great Big Sea. “All the action takes place during the mornings and afternoons. Unlike being on the road doing concerts, there isn’t this big event happening at the end of the day; no show, no after-show parties. All we might do at night is head out for dinner.”

Make no mistake; the 45-year-old isn’t complaining about his literary whistle-stops, which have him crisscrossing the continent over the coming while.

“Actually, I am really, really enjoying it. I always love the opportunity to meet and say hello to people. I’m seeing a lot of familiar faces – folks who are fans of the band and who are interested in the ‘behind the music’ stuff.”

Doyle’s first foray into non-fiction does just that, and more; at 315 pages, the work digs deep into the author’s rural Newfoundland roots.

“The folks at (publisher) Random House had been following my blog on my website and approached me in 2012 about putting a book together. Honestly, I didn’t know if I could do something of that scale, but I thought to myself why not? And then with Great Big Sea going on hold last year, the timing seemed right to take on the project.”

The process of penning a personal memoir, he notes, was very different from writing a song.

“Music always came very quickly to me. I could work on something for 30-40 minutes and it would be done. It’s the same for the blog stuff. Writing a book was more a marathon than a sprint, and it required a greater sense of daily discipline, even if it meant writing on a bus or at an airport. It took some time to get used to the idea that I just had to keep going, but like anything, once I had done it for awhile it became part of my regular routine.”

Drawing on memories of his early years in Petty Harbour, just south of Newfoundland’s provincial capital of St. John’s, wasn’t the challenge he thought it might be.

“The book is filled with memorable characters and stories because all these people, and all these things that happened while I was growing up, are simply unforgettable; they left a pretty powerful impression upon me. Newfoundland has that effect on everyone, really, whether you live here or are just visiting. The province is rich with unique and distinct people and landscape.”

There is also, adds Doyle, a robust creative culture on “The Rock” these days.

“You could call it an overabundance,” he chuckles. “Now that the province has some money, all the artists are coming out of the woods. It’s quite exciting to experience and be a part of actually.”

That creative edge, he explains, isn’t new to the island.

“We have a long history of story and song in Newfoundland. Most of it comes from the our Celtic heritage, right? The Irish influence, in particular, is still very much a part of our music and literature. For years, it was the way we carried on our traditions and culture from generation to generation. And we’re still doing it. The thing is, now the rest of the country, and the world, is paying attention.”

On a personal level, Doyle points to his parents as an inspiration.

“Both my mother and father were musicians, so our home was filled with melody growing up. My kid sister is also a singer, so I’m not the only one of the litter who was bitten by the bug.”

So far, feedback from his family and friends to Where I Belong has been exceedingly positive.

“I don’t think any of them were surprised with where I went with it,” he shares. “They have told me it reads like a love letter to our parents and our family, which it is. The Doyle household was always a hub of sorts in Petty Harbour, and there were plenty of people gathered there on any given night with tons of tunes, tall tales, laughter and hockey games.

“More than anything, writing the book has given me the opportunity to look back on those years and my family and community and feel very blessed for the wonderful life I have had up to this point.”

With so much still on the go, Doyle continues to count his blessings daily.

“I’m busier than ever,” he says. “Along with this book stuff, I have a new album coming out soon (So Let’s Go). And I’ve got all these book appearances and solo musical gigs coming up over the next few months also.

“Honestly, between the bookstores and the concert halls, my body won’t know which way is up. Everything is going to be a wee bit upside down and ass-backwards for the next little while – and that’s just fine by me.”