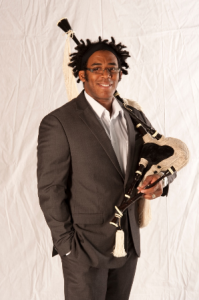 Cuban piper Wilber Calver, aka The Ebony Piper, is celebrating the recent release of his first album, Diaspora, an achievement that feels doubly special as Calver has never had formal music lessons and has had to overcome many hurdles.

The piper, who now lives in the Swiss Alps, said his album blends Celtic melodies, which he plays on the Galician bagpipe or gaita, with Afro-Cuban roots.

“I’m not a traditional bagpiper, and neither’s my style or sound, although I would be grateful to have the techniques of a traditional piper,” Calver told Celtic Life Intl.

“My style and sound have always been Afro-Cuban-Celtic. My cadence is a bit more syncopated. There are elements of Cuban son, Afro-Cuban rumba, jazz, jig, reggae and more.”

Reviewers have praised this unusual blending of styles. According to The Jazz Mann, Diaspora is an extraordinary record, made unique by Calver’s playing. Saxophone star Courtney Pine described the album as “a brilliant-sounding original”.

Calver said the Diaspora project started more than 13 years ago, but progress was slow.

“In Cuba, if you were not a music school graduate you would not be accepted into any of the artistic companies and, if you did not belong to any of these companies, you could not play at official places such as cabaret, nightclubs, hotels and theaters. I was offered contracts to play in Turkey and the Bahamas, but for those reasons it was not possible for me.”

His luck changed when he arrived in Switzerland in 2009 and found friends and musicians, including British composer and producer, Alex Wilson. He and Wilson began working on Diaspora in May, 2010, assisted by Swiss cultural groups SüdKulturFonds and SchwyzKultur.

As a child, Calver saw the bagpipes only in old movies.

“Thanks to the USSR children’s magazine Micha I knew that this amazing instrument is called the gaita. I did not have any idea about this instrument, but was deeply impressed by it. I felt that it made me travel within time. Today, I know that the first bagpipes I ever heard were Highland Pipes. It was strange to see men in skirts, but I loved their costumes and the elegant way they played. I wanted to be like them.

“In 1996, when I met a piper in Havana, I wondered how the pipes would sound with bagpipes and Bata drums. From that moment, I had the desire to hear the two instruments played together. Some thought I was crazy, and others thought that what I said was not important as I did not study music. My first musical blending was the Dance of San Roque with Guaguancó pace (a form of rumba). I wanted to demonstrate the blend was possible.”

In 1997, he studied with the teacher Eduardo Lorenzo, and in 1999 he formed his first band AfroCubanCeltic, better known as Iberoson. His role models were musicians from Galicia and Asturias; pipers such as Carlos Nuñez and bands like Milladoiro and Llan de cubel.

He was most inspired by Martyn Bennett, the genre-blurring musician and producer, who died of cancer in 2005, aged 33. “Whenever I have the blues, I listen to Spree from his album Hardland and I feel better. When I arrived in Europe in 2006, one of the first things I did was look for information about him. His story touched me a lot – he was so young and he played with such passion and energy.”

Calver said the bagpipes are now central to his own life. “Not only because I feel the sensation of time travelling, but because I can play. When I play, I go deep into myself and enjoy the sensation of being in my own world. I combine different melodies and I feel totally free… The sound of the drones is like meditation to me. I can express my own Afro-Latino point of view without losing the essence of the pipes.

“My future plans are simple and consist of learning more about the bagpipes – the playing techniques and history – so that I can improve and express the many ideas I have always in my mind.”

Although the Cuban-born Calver now resides in Switzerland, this cross-cultural collection of pipe-infused melodies cuts a wide musical swath across the global Celtic circle. Funky Caribbean bass ‘n’ drums anchor Cork Hill, Jota Parabela and Clumsy Lover, and even the traditionalist leanings of Eicho De Bar and Amazing Grace get the world beat once-over. The self-proclaimed ‘Ebony Piper’ is at his best, however, on the jazzy Foliada De Berducino and the reggae-infused Cumbanchero, both fantastic forays into uncharted musical territory where the pipes are as at home as they might be anywhere. Adventurous and inspiring, Diaspora is not only a frontrunner for Celtic recording of the year, but also a reminder that the Celtic influence is now both global in scope and greater in scale than the sum of its parts. ~ SPC