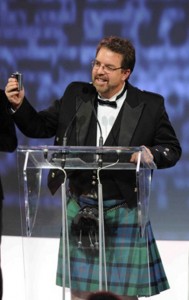 anadian author Will Ferguson says he was fully prepared not to win this year’s Scotiabank Giller Prize.

“I had been practicing my best runner-up smile all week,” jokes the 48 year-old novelist over the phone from Toronto. “You know – it’s the smile you see from the 2nd place contestants in beauty pageants.”

Instead, the multi-award winning humourist and travel writer found himself center-stage, accepting Canada’s highest literary honour for his latest effort 419, the strange and stirring story of an insidious internet scam and a woman’s quest to find her father’s killer.

“Thank God I had a flask of whisky in my sporran,” he laughs with a mild Scottish brogue, noting his Clan attire from the previous evening.

“I was all done up in traditional Scottish regalia,” he beams; “A Prince Charlie jacket, and the Flowers of Scotland pattern – which is very similar to the ancient Ferguson Clan tartan – on the kilt.”

The outfit, he admits, brought about some good-natured ribbing.

“As I was making my way to the podium, the great Irish writer Roddy Doyle, who was one of the judges for this year’s event, said to me If I knew you would be wearing your kilt to this thing I wouldn’t have given you the award.”

“Then he said, thankfully your wife’s Kimono (Ferguson’s partner Terumi is Japanese) cancelled it out.”

Centuries old Irish-Scottish jesting aside, the Calgary native was proud to wear his Celtic roots on his sleeve.

“I’m actually Irish-Scottish myself,” he beams. “My dad’s family is from Scotland, and my mom’s family is from Belfast. My blood is a meeting place for these two cultures, and it certainly explains my chattiness and my penchant for storytelling and humour.”

They are traits that he shares with his siblings.

Growing up, the Ferguson kin were encouraged to partake in the arts.

“My parents never told us what to do when we were young. They believed that the arts were a noble vocation and they were always very supportive of our endeavours in that field. I think they were only disappointed in me when I became a teacher.”

Ferguson’s years at the blackboard in the Far East were fruitful, however, both personally and professionally.

“It where I fell in love with Terumi,” smiles the scribe, “and it is where I opted to take a stab at writing full-time.”

It was a decision that would pay-off in spades for the aspiring author, with 15 critically-acclaimed works in 15 years, including three that have won the Stephen Leacock Memorial Medal for Humour; Generica (later renamed Happiness) in 2002, Beauty Tips from Moose Jaw in 2005, and Beyond Belfast – a travel memoir – in 2010.

He can now add the Giller silverware to his trophy case.

“Suffice to say that Terumi is relieved and that I have been quite surprised by all of the success,” confides Ferguson.

“Maybe I should start thinking about practicing an acceptance speech.”

419 signals a well-played departure of sorts for Ferguson. Gone is the light-headed humour of previous works, replaced with a heavy-hearted hand that follows protagonist Laura Curtis as she crosses continents in search of justice and redemption for her father’s murder. En route, she encounters a quirky cast of characters that bring out both the best and the worst in her own. Despite the newfound darkness, however – and as with the author’s past works – the writing and pacing are fluid and fresh, fleshed-out atop a strong narrative arc. Setting, mood and tone emerge with the subtle touches of a master-craftsman, as the dialogue invites readers to dive into murky moral depths. An excellent read and one that is well-worthy of all the accolades.