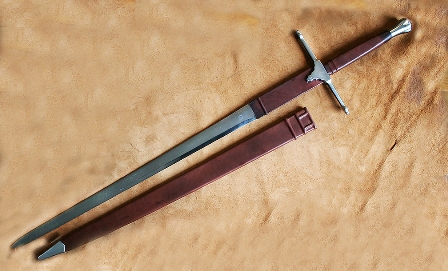 William Wallace’s sword has been moved from a secret location where it has been stored, and reinstalled in its home – the newly refurbished National Wallace Monument.

One of Scotland’s most treasured national icons, the legendary Wallace Sword, has been reinstalled in its home at The National Wallace Monument following a period in secret storage. The 5ft 4” sword has been moved from a location shrouded in secrecy where it was guarded 24 hours a day and has been reinstalled at the Monument by renowned historian and weapons expert David Caldwell.  The sword has once again become the centre piece of the Monument’s artifacts, as it takes up residence in The Hall of Heroes.  As the sword is considered to be an irreplaceable national treasure, during the tower’s refurbishment, it was kept under guard in an undisclosed location.

The sword returns as a comprehensive refurbishment of the Monument is completed. The recent refurbishment of the Monument includes the use of an illusionary technique with mirrors and reflective glass to make characters appear and disappear in the presentation of a new film in which Wallace and Andrew de Moray discuss the Battle of Stirling Bridge, reflecting on Scotland’s victory and the country’s future.  The battle was a turning point in Scottish history as it marked the start of Scotland’s successful campaign for independence, ultimately achieved after the Battle of Bannockburn which is commemorated by its 700th anniversary this year.

The National Wallace Monument, which is one of Scotland’s year round attractions, draws over 110,000 visitors every year is open again to visitors for another season.

William Wallace led the Scottish rebellion against Edward I in 1297 and inflicted defeat on the English army at The Battle of Stirling Bridge. He is remembered as a Scottish patriot and national hero.

Commenting on the reinstallation of the sword, Zillah Jamieson, Chair of Stirling District Tourism, emphasized the significance of the event, “As the sword is of such historic value and has so many remarkable tales woven in to it, the utmost care had to be taken to securely safeguard it and deliver it safely back to its home. Stirling will be in the spotlight in 2014 and we want to ensure that the reinstallation of the sword pays an appropriate tribute to Scotland’s national hero and to the part Wallace played in shaping Scotland.”

It has been installed in its new display case in the Hall of Heroes gallery which focuses on the story of Wallace and how he came to be acclaimed as Scotland’s first national hero. The legendary broadsword is the centerpiece of the gallery, proudly displayed on a plinth built with stone originally quarried for the construction of the Monument 150 years ago.

Cherished as a treasure of the Scottish nation, Sir Walter Scott described the sword as “Fit for archangel to wield, yet light in his terrible hand”. The sheer size of the sword at just over 5 foot 4 inches suggests that Wallace must have been unusually tall and strong.  Estimates put him at about 6 foot 6 inches, or about 2 meters tall. Legend even has it that Wallace once made a belt for this sword from the skin of his great enemy, Hugh de Cressingham, who was slain in the Battle of Stirling Bridge.

The sword’s history is as significant as that of the Stone of Destiny. It is said that after the capture of Wallace, the sword was taken to Dumbarton Castle where it was kept for almost 600 years.  Despite protests from the people of Dumbarton, in 1888 the sword was installed in The National Wallace Monument with great pomp and ceremony.  In 1912 the case containing the sword was broken by a suffragette called Ethel Moorhead to highlight the struggle to obtain votes for women and it was stolen in 1936 and again in1972  but on each occasion it was safely recovered and returned.