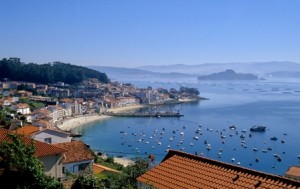 “Don’t get me wrong,” laughs the 59-year-old financial analyst from his home on the Isle of Man. “I love it here, but I’d rather be almost anywhere else in the middle of the winter.”

While his home country still enjoys a moderate winter, temperatures can fall to as low as 5 degrees Celsius in January – and that’s when Lewis plans his holidays.

“We have been vacationing in Galicia each January for the last 9 years,” he says. “My wife, Deborah, and I both love the culture and the scenery, and the weather is far more favourable than it is here at that time.”

Lewis’ interest in the northwest corner of Spain began more than a dozen years ago when he began digging up his past.

“My family’s roots are Irish,” he explains. “My great, great, great grandfather was a sea-trader from Cork who made regular trips down the coast to Spain. From what I have learned, he was a bit of a scallywag, and it is entirely possible that I have some second and third cousins in and around Galicia. You know how seductive those Spanish women can be.”

“My story is similar,” she pipes in. “My family were originally merchants from Dublin City who peddled their wares all across the European coastline. We actually have old naval records of their trips to Galicia.”

Fascinated by their shared heritage, the couple first travelled to the Spanish province – now considered an autonomous nationality – in the winter of 2004.

“We were there for 10 days that year,” recalls Deborah, noting that much of their time was spent scouring public records and local libraries. “Interestingly, it wasn’t until we returned home that we both realized how taken we had become with the place.”

The appeal is understandable; along with a warmer winter climate,Galiciais a scenic gem – a smorgasbord of seaside beaches, running rivers, rolling hills and sweeping country landscapes – all richly wrapped in history.

“For me it was the people,” continues Deborah. “Everyone was extremely warm and helpful to us on that trip, but what impressed me most was how deeply involved they are with their families and communities. The love they have for one another was a real eye-opener.”

“The food,” he laughs. “I’ve never had better fish in my life – fresh off the boat daily. The Sangria is pretty special too.”

Both felt a sense of familiarity on their subsequent sojourns.

“I didn’t expect Celtic culture there to be as strong as it is,” admits Norman. “You can see it in the art and architecture for sure, but even among the residents there are signs in their mannerisms.”

“I hear it in the music,” notes Deborah. “The melodies are similar to the ones I heard growing up. The pipes and whistles are very much like those you might hear in Ireland or Scotland.”

Side-trips to neighbouring Asturias and Portugal have also been a revelation.

“What has become obvious is that the Celts took the Good Lord seriously when he said go forth and multiply,” chucklesNorman.

“We met a lot of people there who are as interested in our culture as we are in theirs,” she says. “We’ve made many good friends from the entire area.”

The Lewis’ will be joining those new-found friends this winter for the Camino de Santiago, the pilgrimage route to the Cathedral of Santiago de Compostela in Galicia, where the remains of the apostle St. James are said to be buried.

“It will be great to reconnect with everyone,” says Norman, “especially in a warmer climate.”