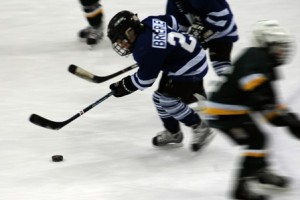 The weather has turned in Wales, with the residents of Cardiff now awakening to frost and light snow each morning. Shovels are already out, as children shuffle to and from school outfitted in an array of winter wear.

“I can’t move,” says the youngster, bundled up in a pink ski jacket, snow pants, wool hat and scarf. “I can barely breathe with all this stuff on.”

Her mother Alison reminds her that she and her classmates are going ice skating that morning.

Thousands of elementary students will be strapping on their skates this winter – many of them for the first time – at the Cardiff Bay Ice Arena, the city’s principal indoor ice skating facility.

Built in 2006 as a temporary solution until a permanent rink could be erected, the 2,500-seat, prefabricated structure offers a variety of on-ice activities for locals of all ages. The building has hosted several world ice skating championships, and is the current home of the Cardiff Devils of the Elite Ice Hockey League.

“Ice skating has really taken off here in the last decade, largely because of the popularity of the Devils,” says Cardiff Council Leader Heather Joyce. “The number of minor league hockey teams in the city has increased significantly as more young people discover the sport each year.”

Devils’ CEO Paul Ragan explains that his players are popular within the community.

“Along with hosting a number of events for young people at the arena, our players are involved with several minor league teams, helping them at practice and games and teaching them skills. The kids really look up to them.”

The game’s growing popularity in Wales – it is estimated that over 1,100 boys and girls now populate the country’s minor league hockey system – has been a boon for retail sporting outlets.

“We sell more ice hockey equipment now than we ever have,” says Peter Rhys Baines, manager of DW Sports Shop onLeckwith   Road. “Just to give you one example, sales on skates have risen by about 65 per cent each season for the last three years. Sticks, helmets and body gear sales are also up. Once you get your kid fully outfitted to play, the costs can really add up.”

For parents, it is a worthwhile expense.

“I took my 13-year-old son Robby to his first Devils’ game three years ago,” says Matthew Davies, 40. “He fell in love with the sport and we’ve been season ticket holders since then. Last year, he wanted to give it a go himself, so we bought him all the equipment and sent him for skating lessons.”

Robby picked the game up quickly, and now takes a regular shift on defense for his Junior B squad.

“Sure, it’s expensive,” acknowledges Davies, “especially as he’s had a number of growth spurts since he started. But he really enjoys it, it’s great exercise for him, and it’s a chance for him to make new friends.

“Those outdoor rinks can get a little cold for the parents sometimes though.”

The number of open-air facilities in Cardiff has grown as well, with local parks and backyard rinks now providing over 100 ice skating surfaces in the city.

“Breanne wants me to build a rink out back of our home,” laughs Alison Lynch a few days later. “She tells me she wants to be a hockey player when she grows up. Not a figure skater, but a hockey player – a goaltender.

“Just wait until she gets all bundled up in that stuff!”