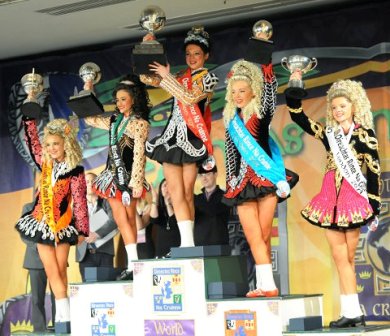 They train hard most every day of the week. They are in the prime of their physical fitness, while deeply connected to history, culture and their own creativity. Their teammates and coaches are like family. There is no pursuit they are more passionate about.

The above could be a description of Olympic gymnasts, figure skaters or the like. But in this case, it encompasses those who compete at what’s often dubbed the “Olympics of Irish dance,” the Oireachtas Rince na Cruinne (the World Irish Dancing Championships).

“Those who compete in the World Championships are at the very height of their amateur dancing careers,” says Galway resident, John McDonagh, Chair of the CLRG’s Oireachtas committee. “They have come through a tough qualifying process either at a regional or national level and their years’ work will culminate with their participation in Montreal.”

Gerard Carson of Belfast has extensive experience competing on the Irish dancing world stage. It all started when he was seven and began dance lessons at the Reid School of Dancing. “I loved the steps the most,” muses Carson. “The difficulty in the steps made me love it more as it gave me a challenge.”

Carson competed at his first World Championships in 2000 when he was 11; that year it was held in his hometown for the very first time. “I remember the excitement,” he recalls. “I had danced on Easter Sunday and all my family came to watch me. It was one of my first majors and I got fifth place, which I was over the moon with.”

Carson went on to win the World Championships five times, the first in Ennis, Ireland (2005), the last in Philadelphia, USA (2009). “I loved the excitement and adrenaline coming up to the championships and all the hard work beforehand being paid off,” he says. “It made it all worth while.”

The inaugural World Irish Dancing Championships took place in small hall in Dublin in 1970. Five years later, the founder of Riverdance, Michael Flatley, was triumphant at the event. “When I won the Worlds it was back in ’75 and it was at the Mansion House [in Dublin],” shared Flatley a couple years back in the TV3 documentary  called Strictly Irish Dancing. “…It was a very prestigious event…It was a completely different sort of competition those days. It was much smaller. It’s much bigger now and much more glamorous.”

The Worlds have grown to host some 5,000 competitors, spanning age groups from under 10 to over 21, McDonagh explains. They come from across the globe representing Commission-certified teachers in 32 countries worldwide, covering all the continents.

“Without doubt, the biggest changes came when the Worlds were held outside the island of Ireland for the very first time in Glasgow, Scotland [in 2002],” McDonagh adds.

“Since then, we have been back to Ireland three times and the highlight has to be 2009, when the event was first held in North America in Philadelphia and again in 2013 in Boston. It was also a huge experience when the 2014 Worlds were held in London, a huge tribute to the massive Irish population [there].”

McDonagh adds that now cities approach them in hopes of hosting the championships. Montreal won this year’s bid, making it the first Canadian city to host the Worlds.

“It’s quite a big thing for us that the World Championships are going to be held here,” says Bernadette Short, a native Dubliner who runs an Irish dance school with her daughter in Montreal. “There is a nice European flavour to Montreal. People from overseas will like that, I think.”

As Chair of the World Championships’ local committee, Short says part of the committee’s duties is programming local Quebec entertainment to perform during the eight days of competition. “The French influence is nice here and the French Canadian music and dance are similar to Irish music and dance,” she explains.

Short moved to Montreal from Ireland 40 years ago, just as an influx of immigrants did during the 19th century. She speaks to the city’s strong Irish identity still alive today, pointing out Concordia University’s School of Canadian Irish Studies, the Saint Patrick’s Society of Montreal, and its St. Patrick Day Parade – North America’s longest running – as examples of the Irish culture that flourishes in Montreal.

Short is thrilled that 10 of her students, four boys and six girls, have qualified for this year’s championships. One is 21-year-old Lucas Lawton who has already competed in five Worlds and won at least two top 10 World medals.

Last year Lawton, who practices five to six days a week, had his best performance to date, placing eighth in the Men 20-21 category. This year will be his most challenging yet as he is competing in the Senior Men age group for the first time.

“We have three different choreographed dances,” says Lawton, explaining the solo competition process. “There are two rounds at the beginning and after that there’s a recall, so the other half of the competition is essentially gone. The [remaining] top half does a third round and then you’re placed. I’ve been fortunate in all my years in the Worlds to make it into the top half! And it’s even a little harder for girls because it’s only the top third [recalled]. It’s super competitive!”

Lawton will also compete in a mixed céilí team event with seven other dancers from his school.

“I love the team events,” enthuses McDonagh from Galway.  “[They are] performing dances as prescribed in our ‘Bible’ Ar Rince Foirne. This book is a collection of Irish dances as performed in the early 1900s which have been collected by folklorists…There will also be dances choreographed especially by their teachers…and a special drama competition where teams will interpret an Irish historical theme.”

Eighteen-year-old MacKenzie Mahler of Calgary, Alberta will be watching as many competitions as she can at the Worlds – when she’s not competing, that is.

“She’s definitely passionate to the extreme,” laughs Mahler’s teacher, Barbara Blakey. “She will sit and watch every single competition during the event. She’ll be there at the beginning of the day until the end, every day, cheering on friends and people whose careers she likes to follow.”

Mahler, a 2013 Great Britain Irish Dance Champion, who practices between two and six hours a day, says Irish dance is her “favourite thing in the whole entire world.”

“I love that it’s artistic and athletic and there are so many opportunities to be creative and develop your art form,” she continues. “And of course I love all my friends that I’ve made through dancing and my teachers and it’s been such a cool thing for my family and me to do. I love the music too a lot. I don’t know, I just love everything about it!”

In past World Championships, Mahler has placed in the top 10 at least three times, including seventh in the Ladies 17-18 division last year. This year she’s focusing on “practicing loads” while enjoying every minute leading up to the Worlds.

“When I was little, I never thought that I would ever be able to dance at a Worlds in my home country,” she shares. “So that’s extremely exciting to be able to represent your country in your country…and to have a shorter plane ride is kind of nice too!”

In addition to coaching Mahler – and her school’s 13 other students that qualified – Blakey is also busy as Chair of the CLRG’s marketing committee, preparing such projects as an Irish dance Canadian Hall of Fame for the international event.

The hall of famers will be honoured through a display at Montreal’s impressive Palais des congrès, this year’s venue for the Worlds, as well as on stage and in the program.

“This event is open to the public and if people are either resident in Montreal or travelling to Montreal, the doors are open to anybody to come and be a spectator,” invites Blakey, adding that besides the competitions, the event will feature an exciting opening ceremony, nightly award ceremonies, international vendors with merchandise and mementos, entertainment and more.

World champion Gerard Carson will be one of the thousands in Montreal March 29th to April 5th. For this Oireachtas Rince na Cruinne he comes not as a competitor, but as a teacher. His school, Belfast’s Carson Kennedy Academy, has 13 dancers competing.

“I am looking forward to watching my students perform and watching some of the finest Irish dancing from dancers all around the globe,” Carson enthuses.

He adds, “I think it’s very important that dance is a part of Irish tradition. I would encourage anyone that is Irish or has Irish background to keep involved in the Irish tradition whether it is dance, music, language…It’s such a unique tradition and it should be spread around the world!”