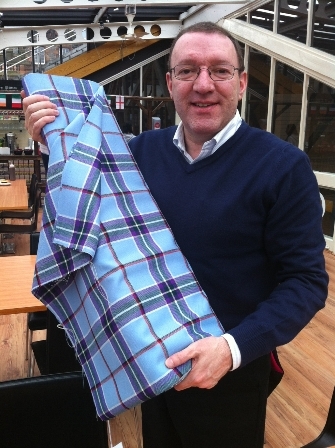 When we last spoke with Victor Spence (July 2013), his World Peace Tartan had just launched in New York City. Since then, he and his iconic design have travelled the globe promoting harmony and understanding. Recently we spoke with him about what he has been up to, and what’s on tap for 2014.

What are the latest developments regarding the World Peace Tartan?
Interest around the world is growing for the World Peace Tartan reflected in our steadily and organically growing social media followers as well as individual and trade enquiries. The World Peace Tartan is a social enterprise that promotes products that carry a message of peace as well as generates revenues for charitable purpose. From a tartan perspective this has never been done before so explicitly.  We are delighted to announce that we have our first US based retailer, ‘Prince of Scots’, who have also placed World Peace Tartan scarves and other items on Amazon. We’ve now received an enquiry for potential orders for distribution in North America for up to 20,000 World Peace Tartan scarves. This is a very exciting development and demonstrates to me that not only is the World Peace Tartan an attractive tartan design that people will wear but the message of peace with this tartan does travel and travel widely. Online sales are also growing through our principal licensee Heritage of Scotland. Further to that the available product range has been enhanced beyond scarves and men’s kilts to now include ladies skirts and kilts, mini kilts, waistcoats, neck ties, bella corset, ladies sash and men’s trousers. Cashmere products arrive in 2014 alongside blankets, wraps, shawls and hopefully some soft furnishings. In recent months we’ve received enquiries about an initial merchandise range. We’re still very much open to ideas and proposals from potential licensees for a range of products such as in stationary and merchandise as well as furniture and other fashion items.

What has the response been like since we last spoke?
The interest in World Peace Tartan and the initiative behind it keeps on growing. Following on from the fantastic feature you published earlier we’ve received numerous enquiries from Canada and the US for kilts and cloth. As mentioned above our first US and independent retailer came as a result of meeting wonderful and enthusiastic people in New York during the 2013 Tartan Week including Tim and David from Prince of Scots. Since our first launch in Scotland in 2012 with His Holiness the Dalai Lama receiving the very first World Peace Tartan scarf the tartan design and message has been so warmly and enthusiastically received. Our growing number of social media followers are now regularly sending us their photos wearing the World Peace Tartan. Photos have arrived in from Vancouver Canada, Louisiana US and as far as Adelaide in Australia.   Another very exciting development following on from Tartan Week and Celtic Life interest and support was linking up with Barb Stegemann from The 7 Virtues. Barb commissioned the Halifax NS tartan fashion designer Veronica MacIsaac to make a gorgeous dress that she recently wore at a charity fundraising event. We’re receiving a growing number of enquiries from dress makers as well as kilt makers. the kilts that we’re supplying to international orders are made by Glenisla Kilts of Scotland, one of Scotland’s top kilt-makers who has been a sponsor of the New York fashion show for 10 years and made the kilt that Arun Gandhi wore.

Why is it resonating with so many people?
My own experience and that of our partner producers and distributors is that people really like the design. It could have been easy to make a tartan with such a strong message but looking unattractive or even somewhat unpleasant on the eye but not so with this tartan. I’m proud and chuffed with myself having never designed a tartan or fashion item in my life that this World Peace Tartan design came out of my own creativity and that it is being so well received.

Is it as rewarding as when you first started?
‘Rewarding’ is an understatement. It’s been life changing for me, and others involved, not only in terms of having created what I refer to as a ‘brand with meaning and purpose’ but the creation of a new tartan positively using the iconic nature of tartan alongside the wonderful platform for narratives of meaning and all for the greater good. Furthermore, it’s a very exciting social enterprise with the aim to channel revenues to potentially life changing social purpose. I’ll be very happy indeed and have a deep sense achievement in knowing that a simple idea has done some good for the lives of others. The more World Peace Tartan in whatever form is sold around the world then the more good can be done and not just by way of ‘handouts’ but through a ‘hand up’. Sustainable development and transformation is the goal in our sense of purpose.