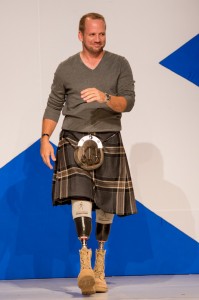 Since 2004, retired Staff Sgt. Dan Nevins has been involved with the Wounded Warriors Project, a not-for-profit, Florida-based organization that raises funds and awareness for severely injured service men and women, and helps them to recover and readjust to post-combat life. This Monday, Nevins will take to the stage as part of the world’s largest Celtic fashion show, From Scotland With Love. Recently Celtic Life International spoke with him about his involvement with both the organization and the event.

What is your own background?
Heritage is Scottish, Irish and German. Born and Raised in Baltimore, MD, Both Parents are Alive, Dad’s side is Scottish and Irish, Mom’s side is German. I have one older brother. Graduated from Sonoma State University in California, Studied Business.

When and where were you wounded?
November 10th 2004 in Balad Iraq

How did you get involved with The Wounded Warrior Project?
One of the founders of WWP brought me a backpack full of comfort items on my first day at Walter Reed, and made me a promise that whatever I needed, that they’d be there for me and my family. It’s a promise they’ve fulfilled several times over… After I retired, I went back to selling pharmaceuticals, but it lost its flavor… I sought out working for WWP, and now I have the blessing of doing exactly that.

What are your roles and responsibilities with the organization?
I am the Director of Warriors Speak. I work with wounded warriors and caregivers of severely wounded warriors to help them heal and share their stories publicly. It’s a speakers bureau of sorts. I get to identify, recruit and train our organizations spokespeople

What are the challenges of your involvement?
The challenge is that I have to see families and warriors in the worst moments…
The rewards are seeing them find their smiles again, and making the journey to their “new normal”.

How did you, and the organization, get involved with From Scotland With Love?
The request came in from our events department almost 4 years ago. It turns out that Sir Sean Connery wanted to have Wounded Warrior Project involved and have some American and Scottish wounded warriors participate. I was asked to participate and I jumped at the opportunity, given my heritage.

Where do the funds go?
The funds go to fuel the 18 different programs and services the Wounded Warrior Project provides to our warriors and families. Our programs fall under 4 pillars of Mind, Body, Economic Empowerment and Engagement. These programs change and save lives everyday.

Will you continue to be involved with the event?
I will personally be involved in this event as long as they’ll have me. For me it is a time to celebrate my heritage, meet amazing people, and spread some good. This is an event I look forward to all year long!

How does it feel to be a Supermodel?
HA! I wouldn’t know… It is a thrill to be treated like one though. Next year, perhaps I’ll hit the gym a bit harder and play the part a bit better. As for now, its an honor to wear these amazing designers fashions and hopefully do them justice. I’m excited to see what I’ll get to model this year!