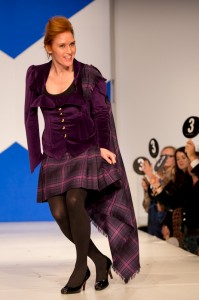 Dawn Halfaker is the President of the Board of Directors of The Wounded Warrior Project, a Jacksonville, Florida-based organization that raises funds and awareness for severely injured service men and women, and helps them to recover and readjust to post-combat life. Born and raised San Diego, CA, Halfaker graduated from the United States Military Academy. This past Monday, she and others from the WWP took to the runway in NYC as part of the world’s largest Celtic fashion show, From Scotland With Love.

What is your own background?
Irish/Scottish/English/Italian.

When and why did you get involved with military service?
When I was in high school, I knew that I wanted to be a part of something bigger than myself and do something different. I wanted to challenge myself and find a way to serve a purpose. I was recruited to attend the United States Military Academy at West Point and knew that was the right opportunity as I would graduate and be commissioned as a 2LT in the Army. I was commissioned June 2, 2001.

When and where were you wounded?
I was wounded while on a routine patrol mission in Baqubah, Iraq, June 19, 2004.

How did you get involved with The Wounded Warrior Project?
After I was injured, I was evacuated to Walter Reed Army Medical Center in Washington, DC. I came out of a coma after two weeks and learned what had happened to me and that I had lost my right arm. I did not think I was going to be capable of doing anything and was dealing with a secession of losses. A representative from the Wounded Warrior Project (WWP) came to visit me while in the hospital and talked to me about their adaptive sports programs. They asked me what I liked to do and I told them I was really into snowboarding. They got me on the next trip and I was snowboarding within 4 months of being injured. WWP and the trip gave me the courage and confidence to keep living my life. Just because you do things different does not mean you can’t do them. Today, I enjoy snowboarding as one of my hobbies and it has given me the ability to feel independent and move forward with other aspects with my life…even if I may have to do things a bit different than others.

What are the challenges of your position?
It’s hard to see the injuries still coming off the battlefield. Everyday military personnel are KIA and WIA and that is tough to see for 10 years running. While it renews our commitment to our mission, it’s tough to see more and more severe injuries day after day.

What are the rewards?
I get to work with Wounded Warriors who inspire me each day. They may have been injured but have an indestructible will that allows them to find opportunity in the face of adversity and move on with their life.

How did you, and the organization, get involved with From Scotland With Love?
They asked us to participate in the show based on the great work we are doing and importance of our mission-They wanted to help us raise awareness

Where do the funds go?
The funds go to our 16 active programs that are designed to assist military personnel and their families recover from injuries sustained while serving

Will you continue to be involved with the event next year and after?
Hopefully!

How does it feel to be a Supermodel?
Haha…I would not know. But I will say it’s definitely hard work and the outfit changes remind me of Uniform Drills in basic training.