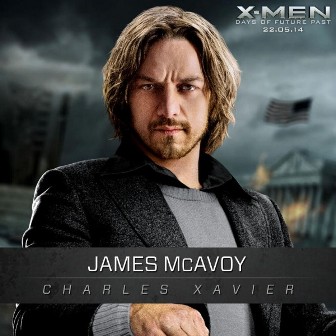 After meeting James McAvoy on the set of Atonement, the book’s author Ian McEwan had this to say about the then up-and-coming film star: “Brilliant lack of pretension, for someone so hot.” Seven years later, that description still applies to the handsome Glaswegian who initially considered the priesthood as a career before the lure of acting took hold.

His new film, X-Men: Days of Future Past, sees him return to the role of the young Charles Xavier, the telepathic leader and founder of the X-Men, that he first played in X-Men: First Class in 2011. Though this kind of Hollywood blockbuster has given a major boost to McAvoy’s career, he still prefers artier fare like The Last King of Scotland, Becoming Jane, The Last Station, The Conspirator, and The Disappearance of Eleanor Rigby.  Last year he also earned immense critical acclaim for his stage work in the West End production of Macbeth which he described as “the most physically demanding and exhausting thing I’ve ever done in my life.”

Though he keeps his private life as private as he can, McAvoy is known to be a fiercely devoted husband to his wife, actress Anne-Marie Duff, 43, and their three-year-old son Brendan.  He met Duff while they were acting together in Shameless, the British TV series which gained him widespread recognition. A skilled boxer and fencer, McAvoy is the son of a builder and a nurse who divorced when he was seven (he’s estranged from his father) and was subsequently raised by his grandparents.

You shot X-Men in Montreal, Canada last year, but you prefer to work closer to home, isn’t that true?
I find it difficult to be away from my family for any length of time. Given the choice, I would rather work in the UK than spend several months working overseas because my family means so much to me. Sometimes there will be roles that are so good that you feel don’t leave you any choice in that regard, but lately I’ve been able to do some very interesting work in Britain and I hope I will continue to have those kinds of opportunities.

Was it different working on this latest X-Men film as compared to your first?
You enjoy developing the characters more and exploring the relationships between them. The first one was something new and cool and we wanted to do something different with it. We had no idea whether it would work out or not and in the end people liked it. There’s always a risk with films of this size and budget and expectations. As an actor you can’t control that and you can only hope it finds an audience and maybe it’s going to help you find more work down the road.

What appeals to you most about X-Men?
I was attracted by the way they handled the dialogue and gave us some intense and personal moments between the characters. I never felt it was just some kind of super-hero film.  We were able to go deeper with the relationships between the characters, and that is why I think audiences found it more meaningful and different from other films of this sort. First Class was a little more light-hearted than the other X-Men films and less intense and we’ve tried to bring some of that back in this one.

You’re good friends with your X-Men co-star Michael Fassbender. Did you enjoy your time in Montreal making the film?
Oh Yeah. It’s such a pleasure to get to hang out with Michael.  We’ve had so much fun doing the film and just enjoying the experience of having that kind of camaraderie.

You and Michael had a bad accident while filming First Class, didn’t you?
It was pretty bad.  I had been driving this golf buggy like a motorbike with a side car where the other guy acts to counter-balance the weight. Unfortunately one day I got into a golf buggy that was much faster than the other ones on the set we had been using. I was driving and Michael was in the back doing counter-balance… hanging on. At one point it just (took a leap up in the air) and when it sort of landed again it caught so much traction that we just launched forward. And we were going too fast. Anyway, we launched into the back of a Lexus and I flew forward, smacked my face on the windscreen and the next thing I knew I was about 15 foot away from the actual golf buggy lying on the ground. I looked up and Michael was jammed into the driver’s seat and blood dripping from his shins like Niagara Falls.

You’ve also been playing Macbeth. What has that experience been like?
It was one of best experiences I’ve ever had as an actor. Every night was an adventure and it was very visceral and provocative. Macbeth is a dark play to begin with and we took those themes to the extreme. We wanted to give audiences the feeling that there was danger luring on the stage and that they might have reason to be scared. I was this raging, shouting Macbeth and we wanted to make the people sitting in their seats feel very uncomfortable and feel like they were being physically threatened by what they were watching on the stage in front of them. I didn’t hold anything back and I was completely drained and battered by the end of the production. I’ve suffered some injuries on film sets but nothing compares to the accumulated physical and psychological toll that doing Macbeth took on me. But it was great fun!

You’ve been able to enjoy a very diverse career both with big Hollywood productions and also in some important art house films like Atonement or The Last Station?
That’s the balance I would like to have as an actor. Sometimes you need to work in the bigger films once in a while that enables you to have the freedom to work in smaller films or do theatre…But everything is lovely. If I’d been told I’d be where I am now, I wouldn’t have believed it. I’ve also enjoyed being part of wonderful casts and worked with outstanding talents. My thinking is that if the people around you are great, you’re going to be better.

You said earlier in your career that you lacked a measure of confidence?
What I meant by that was that at the beginning of my career, I was a little less certain about what I was going to do. Then, with each role, you wonder, “Can I pull the wool over everybody’s eyes again?” -because it’s always a challenge. It’s never particularly easy, and when it has been, I’ve not been particularly good, I don’t think.  So the process for me has been one where even if a particular film has been successful, if your heart wasn’t into it or the role didn’t feel right, you come out thinking, “God, I got through that by the skin of my teeth.” So you want to put yourself in a place where you keep challenging yourself and want to do better.

You grew up in Glasgow and were raised mainly by your grandparents.  Do you think that experience was something that has given you greater inspiration in life?
There were rough aspects to it but it wasn’t something that made me angry in the sense of wanting to prove myself… I was brought up by my grandparents, so people go, “Oh what was that like? That must have been hard?” And you go, “No. It was just completely normal” because the new norm seems to be whatever you make of it, doesn’t it? I grew up in a council estate called Drumchapel. I lived there until I was about 19. But I’m not doing it down. I love Drumchapel and I go back all the time but, yeah, it’s not posh, do you know what I mean?

Do you recall you first acting job?
I was about 19. I went south during the summer vacation from college, and I did this production of Romeo and Juliet and West Side Story, but when I came back to my grandparents’ house where I had been living, they’d completely thrown out all of my stuff and redecorated my bedroom. So I moved out five days later…I took it that it was time to go….but my grandparents have been proud as punch about my career. They’re besides themselves at times, and I love that, I really do love that.

Recently you attracted a lot of attention and controversy for your work as Bruce Robertson in Filth, based on the Irving Welsh novel. What was it like for you as a Scotsman to work in your native accent, your native country, with a Scottish director and making a movie out of a Scottish novel?
It was great. I think I underestimated how much being away had affected me. I’m away from Scotland all the time. I have not played many Scottish people and I haven’t worked with many Scottish people. To be back in my home country with a whole bunch of Scottish people was kind of beautiful. We all share a cultural identity, a cultural history and reference points that we can touch upon. That’s wonderful. And then, of course, I did Macbeth with an entirely Scottish cast. It was on stage in London, but we were around 15 Scottish people invading the West End.

Despite the fact that Bruce Robertson was a strange fellow to say the least, did you ever find yourself identifying with the character?
No! You try to sympathise and empathise with baddies but there’s no need to identify with them. I tried to put myself into his mind-set and understand his deranged perspective, but I wouldn’t want to have a pint with him.

Are you happy with being an actor and family man as opposed to the possible life you might have led when you were considering the priesthood as a teenager?
Wanting to join the priesthood was a romantic notion on my part. I wanted to be a missionary helping people in remote regions. I’ve always had that sense of wanting to be adventurous in my life. But I was 15 at the time and at that age you start becoming very interested in girls who were much more of an adventure for me than anything else. I also started getting interested in acting and so I had to turn my back on God in that respect. But I’m grateful he has chosen not to punish me!