YEAR OF THE BURNING 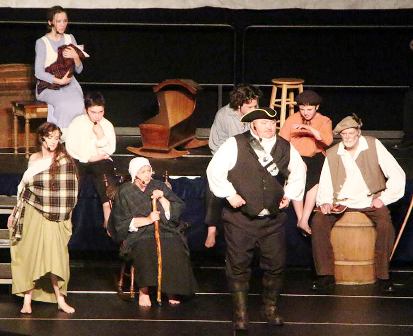 A vibrant and vital musical drama, The Year of the Burning captures one of the most violent periods during the clearing of the Scottish highlands.

A kaleidoscope of music, story, song and dance, The Year of the Burning is the third in a trilogy of highland clearances musicals presented by Nova Scotia’s Ships of 1801 Society.

The story, which will be staged tonight in Port Hawkesbury, Nova Scotia tells the terrible tale of the burning-out of the people of Sutherland, in the north of Scotland, in the early 1800s.

With a piper, a fiddler, and a small but versatile orchestra, the show features more than 20 original songs sprinkled with traditional Gaelic pieces.

“Ours is a Celtic story in every way,” says producer Duncan MacDonald. “But it is also an immigrant story, so people of any background will find lots to identify with while enjoying the music.”

Like previous shows in the trilogy, The Year of the Burning takes place on board a ship bound for Nova Scotia. The highlanders, who had farmed the same small crofts for generations, balked when served with eviction notices as they believed they owned their cottages. Patrick Sellar, the ambitious land manager hired by the wealthy Duke and Duchess of Sutherland, met stubbornness with fire, torching the roofs of their blackhouses. Even as the highlanders staggered away through the smoke, their lands were turned over to grazing sheep.

“It was music and story-telling that sustained our pioneers through tremendously difficult times and that is at the heart of our show.  It is in these forms that their history was recorded, so it is fitting that this is how we remember them 200 years later.”

Bitter and broken, with Sellar’s curses ringing in their ears, the highlanders recount their particular heartbreaks as the journey unfolds.

“As it must have been on any immigrant ship, we have a varied cast of characters, including some nearly beaten and some who summon amazing grace and resilience. Most are fictional, but we pulled a few people from history and built around them.”

In the cases of land agent Sellar and an aging scribe named Donald MacLeod, MacDonald was able to make use of their own words as found in their writings.

“MacLeod provides a first person account of the burning of a village, with the smoke rising over the houses, children crying, dogs barking and the highlanders milling about in confusion and despair in the wake of a visit from Sellar and his fire-razers.”

A prodigious letter writer, Sellar was given to frequently expressing his low opinion of the highlanders.

“He considered them stupid, stubborn and backward, calling them wood stealers, poachers, thieves and illegal distillers of whisky,” notes MacDonald. “He also believed them to be idle and lazy, claiming they’d rather drink than work their farms.”

Sellar’s opinions are challenged by one of his victims, a sharp-tongued widow named Henny Munro. She succinctly sums up what Sellar did not understand about the highland character, and it often falls to her to rally her shipmates by inviting singing and dancing.

“Many of these highlanders had a deep conviction that there would be a better day ahead, if not for themselves, then certainly for their children.”

It was that view that brought the MacGillivray family to pioneer in Nova Scotia in 1791. They left behind a young son to be trained as a piper. With the demise of the clan system, piper John MacGillivray decides to join his family in Nova Scotia and a bit of poetic license is employed to place him on the same ship as the exiles from Sutherland.

“His mother, Janet, who has sheltered a steady stream of dispossessed highlanders, waits on the shore of the Northumberland Strait, hoping to see her son again before she dies,” explains MacDonald. “She becomes a beacon for the people on the ship.”