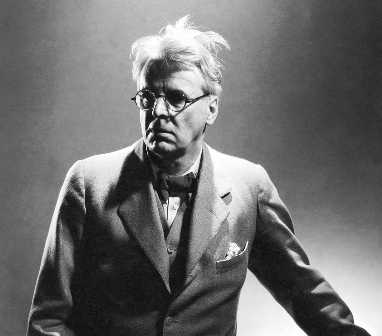 William Butler Yeats, who was born in June 1865, has just finished celebrating his 150th birthday. In the case of most of us, death has a pesky way of interfering with the onward march of our social calendar. The celebrants of Yeats’ sesquicentennial birthday, however, are quite unperturbed by the fact that the birthday boy is no longer with us. Between public readings, Georgian houses in Dublin enlivened with Yeatsian spirits and seances, academic conferences and studies, Yeats’ 150th has been a hooley all round.

This blowout may risk the charge of being crass and exploitative, but not a bit of it. For Yeats, death itself was simply a man-made construct that any art worthy of the name could outface:

Death and life were not
Till man made up the whole,
Made lock, stock and barrel
Out of his bitter soul,
Aye, sun and moon and star, all,
And further add to that
That, being dead, we rise,
Dream and so create… (The Tower)


Yeats also claimed that death was an inexhaustible fount of inspiration for good poetry: “sex and death are the only things that can interest a serious mind.”

Such high-mindedness forced a wedge between he and some of the Irish reading public. In response to this, Yeats, more than any other writer, was responsible for the creation of a vision of Ireland that bore scant relationship to the country where peasant farmers struggled under the imperial and clerical kosh. He was explicit about his view of Ireland’s proper identity: “A Druid land, a Druid tune.” He wanted to create an audience for it too, his vehicle being the Abbey Theatre, the new national theatre of an emergent nation forged partly to reflect his view of what Ireland truly should be. All the blather about fairies and a whimsical, poetical peasantry would be difficult to bear were it not for Yeats’ visionary brilliance in imagining the land anew:

Imagining a man,
And his sun-freckled face
And grey Connemara cloth (The Fisherman)

Yeats’ vision of Ireland became enmeshed in the particularly troubled politics of the republic. His lines on the Easter 1916 Uprising, in response to the action of rebels who seized a handful of significant buildings in central Dublin including the General Post Office and proclaimed the republic, will be quoted ad nauseam next year during the centenary; Yeats’ marrying of ancient Celtic myth with radical, revolutionary politics in his later verse will be less discussed and less understood:

When Pearse summoned Cuchulain to his side.
What stalked through the Post Office? (The Statues)

In his later years, the civic-minded Yeats became, in the words of one of his biographers, Brenda Maddox, ‘a virtuoso of the committee table’, and he got appointed to the Senate. If a censorious and patronizing tone still clung to his Senate speeches, it nevertheless stands as a noble record that he defended the Protestant minority in the South, and spoke in favour of the right to divorce—civilizing and modernizing issues that rattled the complacency of the newly-founded Dublin government.Yeats became a spokesman on artistic and moral issues—the excitable young poet’s elevation to the status of a “smiling public man” would seem to have been complete in his later life? Not in the poetry, and the poetry attests to the power of his imagination to withstand, and to stand aloof from, the flurry of his other mundane concerns.

The catalogue of Yeats’ sillinesses and snobberies is as long as it is offensive. His reputation in Ireland suffers to this day for his unfair judgements of Irish people and for his poses; his flirtation with fascism does him no favours either. Yet there is still the poetry. W. H. Auden said this well in his wonderful elegy for Yeats: “You were silly like us; your gift survived it all.” A censure and a pardon in one breath. And what was the spur that honed his gift?

Yeats, at the age of 23, fell for a fiery woman, a prominent revolutionary, named Maude Gonne who would not have him. After a series of proposals, pining verse and attempts to woo her, he finally relented a little and went to work on Gonne’s daughter—who wouldn’t have him either. Meanwhile, he had turned fifty and started a family with an ever accommodating English woman named Georgie Hyde Lees who very soon understood the disposition of the man she lived with (“he would cut the wings of an angel to write a good poem”). She realised too that their marriage of conveniencewould not stop Yeats’ wandering eye, so she oversaw his monkey gland surgery (Steinach operation) to rejuvenate Yeats sexually and arranged meetings for him with his girlfriends in London. And he continued to rave about Maude Gonne—even on his death bed, he was still writing love poems for Gonne. Very good ones too.

That is the point about Yeats. While silliness permeates his work, it never overwhelms it. Every Irish person who has found his disdain for Irish people problematic, might nevertheless address themselves to the corpus of work he created and acknowledge the magnificent achievement that it constitutes. He was certainly one of the greatest poets of the century and his unceasing energy to create the possibility of a new beginning was hugely important to Ireland during its transition to independence. For all his crazy notions and undignified love pursuits, thankfully there still is the poetry:

Had I the heavens’ embroidered cloths,
Enwrought with golden and silver light,
The blue and the dim and the dark cloths
Of night and light and the half-light,
I would spread the cloths under your feet.
(He Wishes for the Cloths of Heaven)


At 150, Yeats has long outstripped the standard Irish language platitude—go maire tú an céad/ that you may live to be a hundred. Bring on another 150 birthdays and his work will still be read.