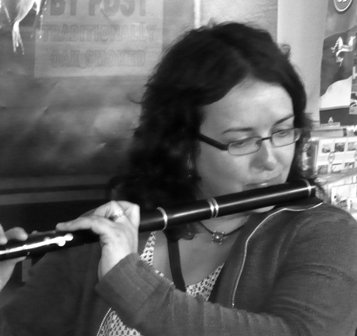 Founded by Mona Douglas in the late 1970s, Yn Chruinnaght Inter-Celtic Festival is at the heart of the Isle of Man’s cultural calendar, showcasing music, dance, language and the arts. Recently we spoke with festival spokesperson Dr. Breesha Maddrell about what audiences can expect this week.

When and why did you get involved with the Festival?
I first became involved as a young performer, taking part in competitions with my school folk group! Over the years, I’ve performed and competed regularly – flute, piano and voice – before joining the organizing committee in 2007. It’s a fantastic festival – it’s great fun – so why wouldn’t you want to become involved!

What are your roles and responsibilities there?
These days I’m part of a volunteer committee, working on all aspects of the festival – from booking artists and venues to planning late night pub sessions. We have a brilliant set of people who work cooperatively rather than hierarchically, so there’s a chance to try your hand at all aspects of event management if you so wish. I may be writing media releases one day and emptying bins during the festival itself – it’s hard work but it’s worth it.

Why is it an important event for the community?
It’s important to make a statement about our Celtic roots – Yn Chruinnaght does that quite brilliantly. It’s considered our national Celtic festival, equivalent to An tOireachtas and the Eisteddfod – in fact, we still welcome delegates from Ireland and Wales each year. In the spirit of our name, which means ‘the gathering’, we have made an effort to keep the traditional six home nations represented. Over the years, we have even been lucky enough to be able to feature touring acts like Newfoundland’s award winning The Celtic Fiddlers. As an aside, we took them on a Waking Ned Devine tour, as they were in love with the film and fell in love with the Isle of Man once they visited locations like Cregneash and Niarbyl with their traditional thatched cottages. We give Manx performers of all ages a professional platform, offer a mix of ceilidhs and seated gigs, and showcase Celtic culture in as many of its forms as possible. We have outdoor displays, a language forum, craft-fair and workshops, commission artists and composers; we keep creativity at the heart of the festival and therefore at the heart of the community.

Who traditionally attends the Festival?
We’re delighted to say that people of all ages attend Yn Chruinnaght. We have an increasing number of visitors from overseas, too, people who want to catch high-profile acts in an intimate concert-setting, or who want to discover this very beautiful island.

What can they expect this year?
Very pleasingly, a past committee member said that it was a very well-rounded festival! We have top acts like flute-driven Irish band, Flook, and gorgeous Scottish Gaelic singer and harpist, Mischa Macpherson. From Brittany we have possibly my favourite singer in the world – Lors Landat – in his duo Landat-Moisson, giving concert performances as well as leading fest-noz dance evenings. We also have Keskowethyans dancers from Cornwall, Welsh love-spoon carver, Sharon Littley, and a whole host of Manx performers. It’ll be a busy festival with gigs, sessions, community and schools outreach, workshops, a craft-fair and outdoor dance displays. One of the highlights will be a newly commissioned inter-Celtic piece by talented composer and multi-instrumentalist, David Kilgallon – we’re very much looking forward to the premiere of that.

How has the event evolved through the years?
The people and the venues have changed over the years but the spirit has stayed the same. Some people can be a little nostalgic for the early years when the mart in Ramsey would be used as a venue, or for the large marquees which were the Festival’s home in its boom years in terms of numbers of participants. The Festival has had to adapt to changing times – once it was easy (and cheap!) to bring large dance groups over to the Island on coaches, nowadays we find that festival-goers demand more concerts from bigger names. As long as we keep a balance across the festival, Yn Chruinnaght’s spirit shines through.

Will you remain involved with the event in the years ahead?
Dy jarroo (of course)! Even if I were to take a break from festival organization, I would be involved as a performer or would simply attend events for the joy of it.

How else are you involved with the Celtic community there?
I work for a government organization, Culture Vannin, which promotes the culture of the Isle of Man and its people. Our focus for development for the moment is Manx language, music and dance, and documenting the changing face of the Island. But we also give out grants to a very wide range of individuals and organizations, helping to keep our culture bright and accessible to all. I’m a traditional musician, singer and Manx speaker, so a lot of my spare time is taken up with those activities, organizing other festivals and events and taking part in Celtic festivals around the world.

Is enough being done to preserve and promote Celtic culture generally?
We could always do with more! We’re lucky in the Isle of Man that we have such a strong grass roots community determined to preserve and promote Manx culture. We also have a fantastic Manx medium primary school, Bunscoill Ghaelgagh, and a peripatetic team of language teachers for all of the Island’s schools. But it’s still sometimes difficult to convince people about how important our Celtic identity is, how important Manx culture is in promoting what the Isle of Man is internationally – we’ll keep working at it!