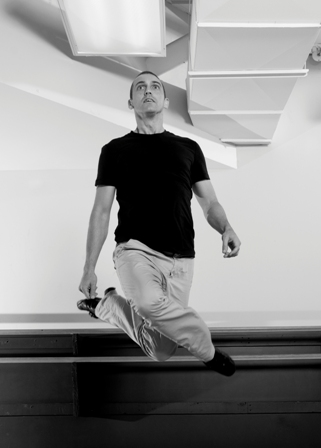 Zeph Caissie grew up in Vancouver, British Columbia, with parents, of Greek and Acadian and Irish heritage, and both dancers. As a young child their son began Irish dancing. This kick-started Caissie’s extremely successful career, which has included touring with Riverdance—The Show and placing 4th at the World Championships of Irish Dancing. Now Caissie shares his love for the dance teaching students in Halifax at his school, Diaga Irish Dance.

When did you start dancing?
ZC: I danced with the Tony Comerford School of Irish Dancing from the age of 4-21. Tony came to Vancouver from Birmingham, England in his twenties and brought with him a World-class level of Irish dance and an internationally respected reputation. He built a relatively small but extremely successful school and essentially put Irish dancing on the map on the West Coast.

What inspired you to relocate to Halifax, Nova Scotia and ultimately open an Irish dance school there?
ZC:  Upon successfully attaining my teaching certification (T.C.R.G.) I decided to open my own school. I had performed in Halifax with Riverdance – The Show a few years previously and felt at home in the city and with the people. I saw potential in the Maritimes as Celtic culture was already an intrinsic part the society. I decided to challenge myself and break new ground so I moved from Vancouver to Halifax and opened Diaga Irish Dance in 2010. My school has been open nearly four years now and has become firmly established in the Maritimes. I produce The Celtic Christmas Show, co-host the annual Crossroads Ceili, the biennial Fundy Feis (an Irish dance competition in the Maritimes), and I am a choreographer with the Royal Nova Scotia International Tattoo.

What makes traditional Irish dance different from other dance forms?
ZC:  The combination of a very still upper body with dynamic movement of the lower body gives traditional Irish dance its unique look. The soft-shoe is akin to ballet and the hard shoe is similar to tap dance. It is a challenging and physically demanding art form which requires co-ordination, precision, and athletic ability.

What do you like most about performing and teaching Irish Dance?
ZC:  Personally, my greatest satisfaction as a teacher comes from the creative process. As a choreographer I am always aiming to express an idea or vision, whether it is in competitive dance or performance. I still get a thrill out of performing myself, but as a teacher and choreographer my greatest joy comes from seeing my students succeed and my creations come into being.

Who are your students at Diaga Irish Dance?
ZC:  My students at Diaga range in age from 4 to 21. Some have started dancing for the first time with the school, several have transferred over from other Irish dance schools, and some have migrated from other dance disciplines. I encourage the students to be supportive of one another and work together as I believe the strength of a school is in its unity. The majority of my students are teenagers and I have a crop of talented younger dancers who are making their way through the ranks. I have senior dancers who have moved to Halifax to attend university and a few dancers in my performance troupe who have retired from competition and have returned to perform. I am fortunate to have a wonderful group of parents who have formed a society in the support of the dancers and the school.

What is the state of Irish dance in Nova Scotia?
ZC:  Irish dance is alive and well in Nova Scotia. In the Maritimes, there are four schools of traditional Irish Dancing including Diaga (three in Nova Scotia and one in New Brunswick). As well, a brilliant teacher named Elizabeth MacDonald teaches set dancing and Sean Nós dancing (old style Irish dancing).

To you, what does it mean to be Celtic?
ZC: To me being Celtic means being a warrior, strong in faith and belief, respectful of the history of the people, and welcoming to all you meet on your journey.