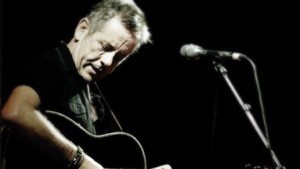 Luke Bloom ‘City of Chicago’
Luka, born Kevin Barry Moore in Newbridge County Kildare Ireland, is the younger brother of Irish folk legend Christy Moore. Bloom, at the age of 14, supported his brother on a tour of English Folk Clubs in 1969. He then went on to record “Treaty Stone” in 1978, his first of 19 albums. In 1987, Moore moved to the United States and took up the performance name Luka Bloom. “Luka” was derived from Susan Vega’s hit song of the same name and “Bloom” referred to the main character in Joyce’s Ulysses. ‘City of Chicago’ is off Bloom’s 2005 album Innocence.

Paul Brady ‘The Island’
This Northern Irish singer- songwriter straddles the line of folk and pop music. The Strabane native played in a variety of bands before going solo. Brady first joined the popular traditional Irish group the Johnstons in 1967 before moving on to Planxty in 1974. In Planxty, Brady played with such Irish music greats as Andy Irvine, Liam O’Flynn, Donal Lunny, and Christy Moore. “Welcome Here Kind Stranger” was the first solo record released by Brady in 1978 and was awarded Melody Maker Folk Album of the Year. Brady is listed among the favorite musicians of Bob Dylan and Bonnie Raitt and has gone on to 15 studio albums including his latest “Hooba Dooba.” ‘The Island’ appears on 1986’s “Back to the Centre.”

Paddy Casey ‘Saints and Sinners’
Dublin-born singer-songwriter Paddy Casey began playing music on the streets at 12 years old. He was discovered busking in Dublin by music producer Muff Winwood who signed him to Sony Records. His first album “Amen (So be it)” was released in 1999 and became certified double platinum. The crooner followed that up with 2003’s multi-platinum Living which climbed to the top of the charts 21 weeks after its release. ‘Saints and Sinners’ was a charted hit for Casey off the album “Living.”

Glen Hansard ‘Falling Slowly’
Glen is best known for his work in the hit movie “Once” as the street busking, heartbroken “Guy” who meets his musical soul mate on the streets of Dublin. Glen scored the album as well, earning a best songwriting Oscar for the movie’s musical heartwarming centerpiece ‘Falling Slowly.’ He is the first Irishman to win an award in this category. Like his movie counterpart, Glen started busking at 13 after quitting school and formed the band The Frames in 1990. This seminal Irish band has released 9 albums and continues to tour and make music today. He is also one half of the rock duo, The Swell Season with his “Once” co-star Marketa Irglova.

Jimmy MacCarthy ‘Ride On’
James “Jimmy” MacCarthy is a singer-songwriter born in Macroom, County Cork, Ireland. Jimmy left school at 15 and made a living singing at pubs and busking on the streets of London. Best known for his songwriting, MacCarthy’s songs have been covered by such notable artists as Christy Moore, Mary Black, Finbar Wright, Maura O’Connell, The Corrs, and Westlife. ‘Ride on,’ recorded by Christy Moore, is one of his best known compositions.

Mickey McConnell ‘Only Our Rivers Run Free’
McConnell was born in Bellanaleck near Enniskillen in County Fermanagh, Northern Ireland.  His music has greatly been influenced by the Troubles in Northern Ireland. In 1965, he penned the classic ‘Only Our Rivers Run Free’ about the constitutional status in Northern Ireland and it became a national hit. McConnell’s songs have been covered internationally by such artists as Christy Moore, The Wolfe Tones, Mary Black and the Kelly family. He currently lives and works in Listowel County Kerry.

Shane McGowan ‘Fairytale of New York’
Shane Patrick Lysaght MacGowan is an Irish musician and singer. He is best known as the original songwriter and singer of the Pogues. Born in Kent England to Irish parents, McGowan spent his early childhood in Tipperary. The crooner lists 19th Century Irish poet James Clarence Mangan and playwright Brendan Behan as influences. Between 1985 and 1987, he co-wrote ‘Fairytale in New York’ which he performed with Kirsty MacColl. The Pogues went on to release several albums before having a falling out due to McGowan’s struggles with substance abuse. The band later reformed to tour internationally. Shane started a new band called Shane McGowan and the Popes and recorded new material and a live DVD. The living legend was voted #50 in the NME Rock Heroes List.

Mundy (Edmund Enright) ‘July’
Edmund Entright is a singer-songwriter nicknamed “Mundy” born on 12 February 1976, Birr, County Offaly. He was signed to Epic Records and released his debut album Jellylegs in 1996. The album’s song ‘To You I Bestow’ was featured on the “Romeo + Juliet” soundtrack. The royalties from this tune allowed Mundy to start his own record label, Camcor Records, on which he released his second album, 24 Star Hotel. The album contained the song ‘July,’ an ode to joy of Irish Summers, which gained heavy airplay throughout the summer months and is his signature tune. The album has gone on to triple platinum status. Mundy has recorded three more albums on his Camcor label to much success.

Damien Rice ‘Nine Crimes’
The Kildare native is an Irish singer-songwriter and musician who plays guitar, piano, clarinet, and percussion. He started his career in the 90s as a member of the rock group Juniper. Rice left the band in 1998 and briefly became a farmer in Italy. After busking around Europe, he returned to Ireland to embark on a solo career. In 2002, Rice’s debut album “O” reached #8 on the UK charts, won the Shortlist music prize and garnered many awards and accolades. Rice released his second album 9 in 2006. The single ‘Nine Crimes’ appears on this album and peaked at #29 on the UK singles charts. In 2009, Rice made an appearance at number thirty-four on The Irish Times’ “The Best 50 Irish Acts Right Now.”

Pete St. John ‘Fields of Anthenry’
Pete St. John (real name Peter Mooney) is an Irish folk singer-songwriter. He is most well known for writing ‘Fields of Anthenry.’ This modern balladeer also penned the classic ‘Dublin in the Rare Old Times.’ The Dubliner lived and worked abroad  as a truck driver, logging camp laborer, professional athlete, and electrical contracting executive. He returned to Ireland in the 1970s and began writing music reflecting his involvement in the peace movement and international civil rights. St. John’s songs have become part of the repertoires of Ireland’s leading singers and musicians. His work has been cited by The Irish Association of Songwriters and Composers and the U.S. Irish Cultural Society among others.