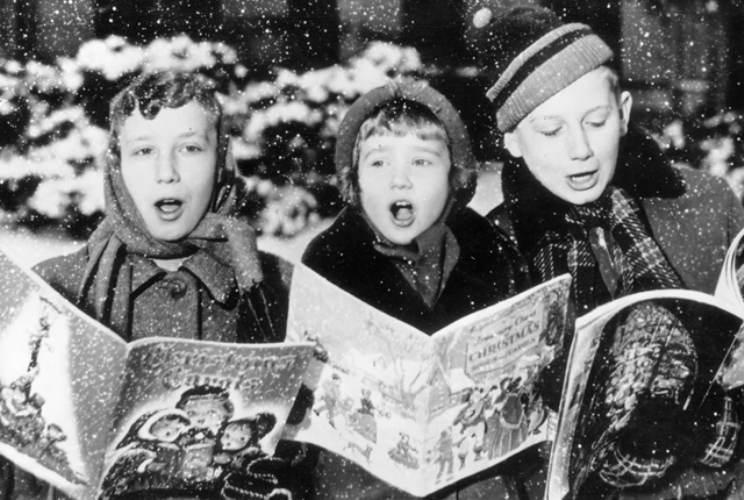 Winter came, and frost webbed the windowpanes and veiled the heather on Mount Leinster. I was helping Gran make the Christmas pudding when we heard the novel putt-putt sound everyone in Graiguenamanagh talked about. I rushed to the window as Farmer Michael O’Shea’s new black car stopped outside our gate. I ran to open the door.

“Mornin’ Mrs. Earls,” the farmer said, pulling off his cap. “I’m driving into Bagenalstown on Christmas Eve. Would yourself an’ the child like ta drive – ya could see your daughter, Eileen, an’ the child could see her mother…”

“Oh, what a grand surprise,” Gran said, flashing her wide smile. “Now only for you Mike, we wouldn’t be able to see Eileen. It’s just too far for our old ass and cart and the bus doesn’t get back ‘til late.”

The next few days we worked to get Mammy’s presents ready. I was delighted with myself because I knit a pair of red mittens with round, wide thumbs for Mammy, who had just left hospital after a long sickness.

When Farmer O’Shea arrived, Gran chose the car’s front seat, where she sat looking regal in her black, Napoleon-style-hat. Her grey eyes widened as the trees and hedges flew past, and she and Farmer O’Shea talked about Ireland having just been declared a Republic. 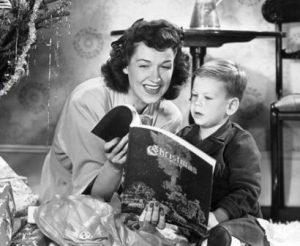 They agreed times were hard and that we must remember that Ireland could quit the British Commonwealth in 1949.

When we arrived at my mother’s, the door flew open and Mammy reached out and hugged me. “Come in!” she said, her green eyes glowing.

I placed Mammy’s mittens in their special red wrapper on the hearth ready for Christmas Day.

“What’s in the boxes?” Mammy asked Gran after she’d poured her a whiskey.

“Eileen, I’ve an apple dumpling in one, fresh cut holly in another, and two of the loveliest Rhode Island Reds in the big one,” Gran said as she opened the large box and lifted the hens onto the kitchen floor.

They were handsome birds, with short crimson combs atop their heads and full mahogany skirts over white petticoats. They fanned their deep red plumed tails and cocked their heads nervously until Gran circled her hand over them, clucked her tongue and called their names. Then they relaxed, and sunk their necks into their shoulders, the shutters dropping over their eyes.

“This is Rosie, all eight pounds of her, and here’s Jane, just as plump!  They lay those lovely brown eggs you love,” Gran said.

“The man from the council said we can’t have hens in town,” Mammy said, looking anxious.

“But they’re for your Christmas dinner!  Rosie’ll make a lovely roast an’ Jane’ll make a bountiful chicken stew…”

“There’s nothin’ to it!  “Just stretch their necks out nice an’ long an’ snap…,” Gran said, miming. 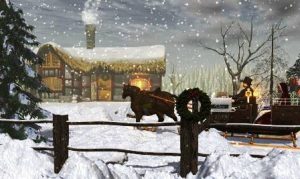 “No.” Gran shook her head. “Not me Eileen. Not a’ tall.  Sure they know me too well.  Eileen, just ask Jimmy Farrell, the grocer… or Jim Jordan, the butcher. Even Tommy the postman would do it.”

“I feel strange asking people to help me with my Christmas dinner,” Mammy said, her eyes brimming.

“I’ll ask Mike O’Shea when he comes back.” Gran’s face was growing flushed from the talk and the whiskey.

When the farmer returned, Gran asked him to kill the hens so Mammy could have a lovely Christmas dinner. I felt sad because the hens were my playmates. There being no other children around, I’d often pick them up, tuck their heads under their wings, twirl them around and they would sleep standing up.  Farmer O’Shea looked down at the hens, then at Gran.

“Well ya know… I’m a hunter.  The only way I could kill them hens is with a gun… after a fair chase.”

Gran gulped her whiskey and pinned on her hat then swooped down and lifted the hens back into the box. “Girls, we’re goin’ home!” she said.

It was dark as we bumped over the Tinnahinch Bridge and into Graiguenamanagh. We passed the Anchor Hotel and saw silhouettes laughing beneath the purple-grey pipe and cigarette smoke. The long narrow street was thronged with shadowy people carrying parcels. We passed the Abbey and drove up Wood Road under a bright moon.

Back home, Gran lifted Rosie and Jane from their box.

“You’ve had a narrow escape, girls,” she said. She glanced at me and we exchanged a long, relieved Christmas grin.

Have you visited Cape Breton?
Total Votes: 94
Polls Archive
×
You or your IP had already vote.