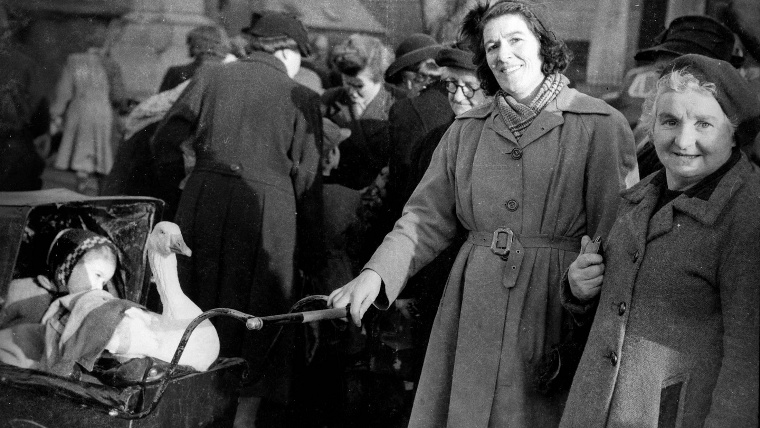 When I was a girl growing up in Bagenalstown, County Carlow, I loved the hustle and bustle of Christmas Eve and the frantic last minute shopping. Men who worked in Brown and Crosthwaite’s Flour Mill were paid when they arrived at work on Christmas Eve morning. To the delight of the workers, each envelope had a cash bonus in it as well.

“I’ve more good news. Ye can leave at noon today. I hear you are going to deliver food hampers, Mr. Stevenson, the miller, said. The hampers were for the old men and women living alone and poor families on hard times.Their faces lit up when a man arrived at their door singing Christmas is coming…and the geese are getting fat…please put a penny in the old man’s hat…as he carried the hamper into the house and put it on the kitchen table. Local merchants put a card in that said,“Compliments of the Joyce family!”

When the men had delivered the hampers, they went to Dooley’s Hotel and ate a big plate of colcannon, a dish made with mashed potatoes, parsley, scallions and a big dollop of country butter. The colcannon dish was a present to the men to thank them for delivering the hampers. They stayed at Dooley’s for the afternoon, practicing the carols and the Latin for midnight Mass. 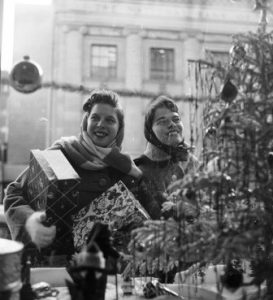 The four major streets of Bagenalstown, a medium-sized market town on the Barrow Riverwere crowded with shoppers buying exotic foreign foods and toys. People rushed from shop-to-shop buying grapefruits, oranges and lemonade, the kind we have only at Christmas. Some shoppers carried a plucked goose or a turkey under their arms. The trains whistled and steamed into the railway station. The young people coming home from England for the holidays were animated and friendly.Men shook the hands of other men and tipped their hats to women.Their warm breaths collided with the hard frost as they called out “Season’s Greetings, Merry Christmas! Happy New Year to ye. I’m home!”

Children old enough to be out by themselves pressed their noses against the glass windows. There was always a cluster of parents with children outside Cleary’s window. They wanted to listen to the little man with the furrowed brow playing Christmas songs.

He looked smashing dressed in a black coat, white shirt and a wide red tie. He had kind sea-blue eyes under a barley-stack of silver hair. When he turned the handle of the organ, it ground out, “Rudolph the Red Nosed Reindeer, “and Jolly Old Saint Nicholas,” could be heard outside in the street. He also played “I’m dreaming of a white Christmas.” My best friend, Ann Farrell, and I would love to see real snow. We wondered what it felt like. Ann said she would give anything to be able to make a snowman.

As Christmas Eve went on, Christmas items, clothes and perfumes with French names disappeared from the shop windows. “Jingle Bells, Green sleeves and Deck the Halls” drifted through the frosty air from the tin whistles of the tinker boys. They were part of a large family and had parked their horse-driven caravan down by the river. Their pie-bald pony swished his tail and grazed along the side of the road. The jingle of coins landing in the boys’ caps at their feet kept the teenage boys playing Christmas carols non-stop.

In the homes, children with rosy cheeks waited wide-eyed, and tried hard to be good. Tonight, Father Christmas will come down the chimney and leave toys in our stockings. I can count on finding an orange stamped Seville in the toe.

The coal fire was banked high in the kitchen grate and the glow from it was reflected in the polished red tile floor.

A fat candle was lit and placed in the window to signal there is room at the inn.

Our goose hung on a big nail in the scullery, ready to be stuffed with seasoned potato stuffing early on Christmas morning. 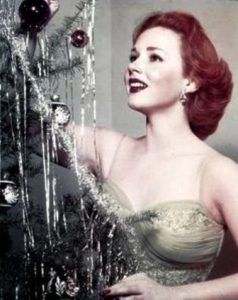 For weeks women deep-cleaned their houses, washed and ironed the lace curtains, cleaned the windows, baked the fruit cake, washed and starched the white linen table cloth and set the table with the blue willow china.

Dad went out with the clippers and cut a few armfuls of red-berry holly. He and Mom put sprigs over the framed photos on the wall, mantelpiece and oil lamps. I arranged the Christmas cards, many with robins or other birds, on the front, standing around the window ledges. Now our house looked jolly and festive. Everything was ready.

As the day turned from light to dark, the bell from St. Andrews Roman Catholic Church rang out a call to parishioners to attend midnight mass. Hundreds of feet clad in leather-soled shoes could be heard walking towards the church. Inside, the smell of incense and candles spiraled up and were trapped in the dome of the high ceiling.The priest and mill workers sang the mass in Latin. We joined them in singing the Christmas hymns.

The young people home on holidays were dressed in black drainpipe trousers and black leather jackets, mini skirts and stiletto shoes with pointed toes, perfect for women with only three toes. The scents of different perfumes made their way into every pew in the church.

On the way back to our house, the bells of Saint Mary’s Church of Ireland joined St. Andrew’s Roman Catholic Church in ringing out a welcome to the new born babe.

The echo of the Bells carried for miles along the Barrow River. The memory of it has remained forever in a little room at the back of my heart.