A DRUID OF MANY TALENTS 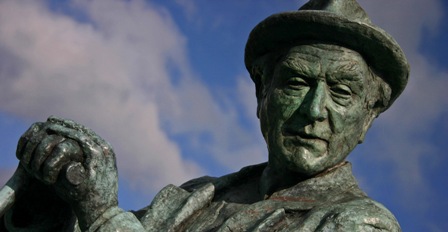 Donal O’Cathasaigh, a frequent contributor to Celtic Life International, was a friend of legendary Irish folklorist, writer and broadcaster Michael J. (M.J.) Murphy. The two sometimes sat beside Murphy’s fire and travelled the mountain roads of South Armagh in Northern Ireland as M.J. collected stories and rural traditions. Here, O’Cathasaigh argues that it’s time to recognize this shy, humble man for his role in preserving and enriching Irish culture.

Ben Kiely, to my mind one of the best of our Irish writers, once called him “the Druid of Slieve Gullion,” and, it stuck. In fact, Michael J. Murphy wasn’t born on the mountain he loved, but he lived much of his life on its broad Dromintee side.

“That mysterious mountain,” he said, “gave inspiration and meaning to my writing and my life.”

Kiely, who first met M. J. as he collected old stories and songs in the wilds of Tyrone back in 1950, remembered him this way, “He was informative and most moving, and suddenly I thought this man here beside me is a druid, as much a part of this ancient land as the stone he sits on. He could have been here on this hillside under this oak before Patrick came.”

Others recognized the significance of M.J.’s home country. The scholar and revolutionary Eoin MacNeill once said that South Armagh was the most historic area in Ireland, and a well-known local scribe added, “Kick any stone and the history leaps out at you.”

The feminist and actress Maud Gonne McBride wrote to Michael, saying that Slieve Gullion sang to her and she could write down the air, and W. B. Yeats and others of the Dublin literati made pilgrimages to M. J.’s mystic mountain. It was an historic place teeming in myth and legend. It would fall to him to preserve its customs, stories and beliefs.

A Providential Meeting in a Pub

I first met Michael J. at Larkin’s Slieve Gullion Inn in Forkhill, South Armagh. It was August 18, 1964, and that night I thought the gods had smiled on me — I knew I had touched greatness. M. J. sat unobtrusively in a corner, drinking porter and scribbling in his ubiquitous little black book. Here was, I thought, Ben Kiely’s druid at home.

I sent a pint down to him and he doffed his cap in acknowledgment. That pint began a conversation that lasted more than thirty years.

Though M. J. never took himself seriously as an academic, he likely contributed more to the emerging discipline of folklore and influenced more folkloric scholarship than anyone else in the field. Yet, in spite of his immense talents and extraordinary influence, he has gone relatively unnoticed.

Born to the Trade

Michael was a storyteller descended from a long line of poets and storytellers, including his great-grandfather, the Gaelic scribe William Jordan, who once composed for the Pope. Michael’s mother Mary Campbell and his father Michael, were themselves renowned storytellers. Like poets of yore, Michael was, then, born to his trade. It was in the blood, and he wholeheartedly embraced it as his calling.

At thirteen he left Dromintee National School outside of Newry –the same school his father had been expelled from for throwing a slate at the master. His father later confessed to him that he only regretted missing the bastard and destroying a perfectly good schoolhouse clock.

Both M. J.’s parents were hired out at age ten to local farmers, and Michael never forgot the terrible toll that form of slavery wrought on young lives. He himself worked the fields as a farm laborer, all the while keeping journals and collecting local customs and lore. Providing a chronicle of life lived centuries ago in rural Ireland, he described weddings, wakes, and funerals, hiring fairs, and much more.

“I was writing folklore before I knew it was folklore,” he said.

His jottings eventually made their way into The Dundalk Democrat and The Newry Reporter and later into the Dublin and Belfast dailies. By 1941, he had assembled and submitted his pieces to William Tempest at Dundalgan Press with the title, At Slieve Gullion’s Foot, and, to his astonishment, Tempest published the collection that launched his career. On the strength of that publication, he abandoned the spade, accepting a part-time appointment as a collector for the Irish Folklore Commission from the legendary Seamus Delargy.

A Folkminder, Answering the Call

Michael got on well at the Commission. From 1941 to 1983, he logged 30,887 pages of text, “a million words from a mountain glen,” as historian Sean MacMahon put it. In addition he transcribed literally hundreds of hours from tapes.

According to Bo Almquist, then-Head of Department at UCD, M.J.’s work led to the acquisition of valuable artifacts for the National Museum’s folklife collections.

Moreover, his newspaper articles, radio and TV appearances on RTE and BBC, and his natural stylistic approach to his subject lent credibility and respectability to folklore as an academic study. Had he served only as a collector for the Commission and Department, he would merit recognition as a National Treasure. He nearly single-handedly preserved a culture and a way of life that would otherwise have been lost.

M.J. was, after all, unique – a gifted collector, talented storyteller, folkminder and passionate keeper of tradition who, at his retirement in 1983, had added an entire shelf of bound volumes to the Department Library at UCD and who believed in and lived by the wisdom of ancient Irish triads.

In his brilliant book-length prose-poem Mountain Year (1964), he echoes that wisdom: “Three things a man should do every year: listen to a storyteller at a fireside, give a hand in a corn harvest field and climb an Irish mountain.”

Michael’s Tyrone Folk Quest (1973), an autobiographical account of the folklorist’s life collecting in the Sperrin Mountains is now regarded a classic – it was required reading and adopted as a handbook and text in anthropology and folklore courses in the U.S.

Mountainy Crack (1976) a folk novel set in the hill country around South Armagh, as well as Michael’s 50 or so published short stories, should have earned him a place in Irish letters. And though he published fiction in the major periodicals of his day, his work in that genre has been eclipsed by the fiction of the “blessed trinity” – O’Flaherty, O’Connor, and O’Faolain — and by the moderns.

In effect, what William Carleton’s fiction had contributed to the social history of nineteenth-century Ireland in his Traits and Stories of the Irish Peasantry, Michael J.’s fiction contributed to the social history of the twentieth. His was, in fact, a truer picture of rural Irish life. He wrote dramas, fiction, journalistic essays, and occasional poetry. In his plays, performed on radio and on stage in Belfast, Dublin and London in the 1940s and 1950s, and in all his writings, Michael J. was the iconoclast-reformer on a mission to maintain the societal good and rid the country of resident evil. His writings championed the poor and the disenfranchised and railed against slavery in the home, the fields and the workplace.

After a hundred years and more than a million words, this modest collector and teller-of-tales deserves recognition. He was, after all, Ireland’s pre-eminent collector of lore and an “uneducated intellectual” with encyclopedic knowledge of his world. Though he rejected all formal honors, in 1996 M. J. was proposed for an honorary doctor of letters degree at a U.S. institution. Unfortunately, the proposal came too late. Michael died within sight of his beloved mountain two months before the conferral.

Perhaps it’s time to republish his major works and long past time for Irish academia to recognize his genius. He was Ireland’s foremost folklorist and, as Ben Kiely would say “a druid of many talents.”