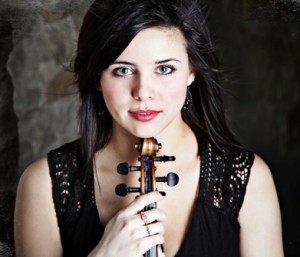 Since being inspired at the age of nine when she saw Natalie MacMaster in concert, Nova Scotia fiddler Alycia Putnam has been working on her chops and a deep repertoire of foot‐stompin’ tunes. The result has been three solo albums and thousands of live performances spanning the globe. Her most recent recording – Wired for Sound – includes 13 tracks of traditional and eclectic fiddle music. Celtic Life International spoke with her about her passion and profession.

What is your own heritage?
I was born and raised in Brookfield, Nova Scotia, Canada, and have been living in Halifax for the past eight years. Although my great grandfather was from Scotland, I mostly consider myself a true East Coaster!

What inspired you to start fiddling?
When I was nine years old I saw Natalie MacMaster perform – her charismatic stage presence, style, and energy sparked my interest in music. Immediately following the concert I asked my parents if I could start taking lessons. During my first few months of fiddle lessons my dad, Robert, told me that he would buy a guitar, jam along, and learn new tunes with me. Before long we were performing at concerts, festivals, business conventions and other events. I think I picked it up so fast because I was exposed to Celtic music at a young age – growing up hearing my mom, Kelly, play the bagpipes with the Colchester Legion Pipes and Drums.

Are they the same reasons that you still do it today?
I think I remained interested in fiddling because it was something fun that my family, friends and I could all do together. My younger sister, Janelle, occasionally joined us playing the mandolin and bodhran, and Matt MacLellan has been playing percussion with us more recently. Music has taken us some interesting places and has given us the opportunity to meet a lot of great people. Although the Celtic genre is my favourite style to play, I feel that learning to appreciate a variety of fiddle styles at a young age – from my first instructor, Gordon Tucker – made a huge difference in my approach to picking new tunes and staying interested. I was fortunate enough to be taught by a number of great musicians, including Kendra MacGillivray, Buddy MacMaster, Richard Wood, Brenda Stubbert, and Kimberley Holmes. All of these instructors have been influential in the development of my style and numerous more continue to inspire and motivate me. Overall, I love the challenge of a new tune, performing, and making people happy through my music.

What motivated you to put this recording together?
I have been itching to get back into the studio ever since the release of my last recording over eight years ago. I have recorded two albums in the past – my first when I was 13 years old and my second when I was 16 – and I finally had the necessary break in my university schedule to not only have time to record, but also to enjoy the process.

What were the challenges of the process?
There are nine other musicians (all busy doing their own projects) on the CD so scheduling was definitely a challenge, but it all worked out. We put in quite a few long days, but always made sure we took breaks, remembered to have fun, and had lots of laughs.

What were the rewards?
I feel that my playing has changed so much in the last eight years, so I am very happy to be able to give fans and supporters of my music a new recording. It was great to get into the studio and work with such an amazing group of musicians, including: Darren McMullen, Zach Smith, Dave Gunning, Ardyth Robinson, Jennifer Wyatt, Gordon Tucker, Kimberley Holmes, as well as my mom (Kelly) and dad (Robert). It was so exciting to be creative, build tracks, add layers, and learn more about the technology used in the recording process.

Do you have a favourite track?
It is difficult to select one track as my favourite. Everyone I talk to seems to have different favourites on the CD. My dad likes track two, Banshee on the Harbour, which features Darren McMullen on banjo. I like track four, The Gremlin, but I also like Colin’s Fiddle, and New Shoes.

What has the response been like from those who have heard it?
The response has been great! Stephen Cooke, entertainment reporter at The Chronicle Herald, recently named the CD his “Pick of the Week.” I am really happy to hear that so many people are enjoying the album. A lot of people have mentioned that this recording is a lot more upbeat and more diverse than my previous recordings. I think a lot of people like the number and variety of instruments that were incorporated in each track.

What is your creative process like?
Whenever I write a new tune, such as New Beginnings, I concentrate on the feeling I have while composing – the tune is much more emotionally charged because of this process. In the studio, my process is very collaborative. I start with something in mind, create sets of interesting tunes I like to play, and work out rough arrangements, but remain open to new ideas. This organic process often produces the best arrangements. Everyone I have worked with is so talented – it makes the creative process very enjoyable!

What makes a good song?
A great tune is unique, has an emotional impact, or makes me stomp my feet.

How else are you involved with the fiddling community these days?
My family and I perform at approximately 100 shows annually, many of which include other performers. I always like to hear other fiddlers/musicians play, whether it is at a concert, festival, or local pub.

What events will you be involved with this year?
I will be performing at some private functions, such as conferences and weddings, as well as at my regular events, including the Summer Sounds of Nova Scotia concert series at the deCoste Centre in Pictou, Nova Scotia. We are just starting to get our summer shows lined up, so be sure to visit my website where details will be posted as they become available.

In your estimation, is enough being done to promote Celtic culture today?
I think interest in Celtic culture is on the rise. It seems like great Celtic music festivals and workshops are popping up everywhere around the globe – as long as people continue organizing events such as these, I feel that the Celtic culture will become more understood and appreciated world-wide.

What’s next on your own creative agenda?
Apart from promoting my new CD, I am hoping to start writing more tunes. I always used to write a tune whenever the mood struck me, which has only been once every few years. I would like to challenge myself and compose a bit more often than I used to. I’d also like to explore some opportunities to collaborate and perform with more musicians.