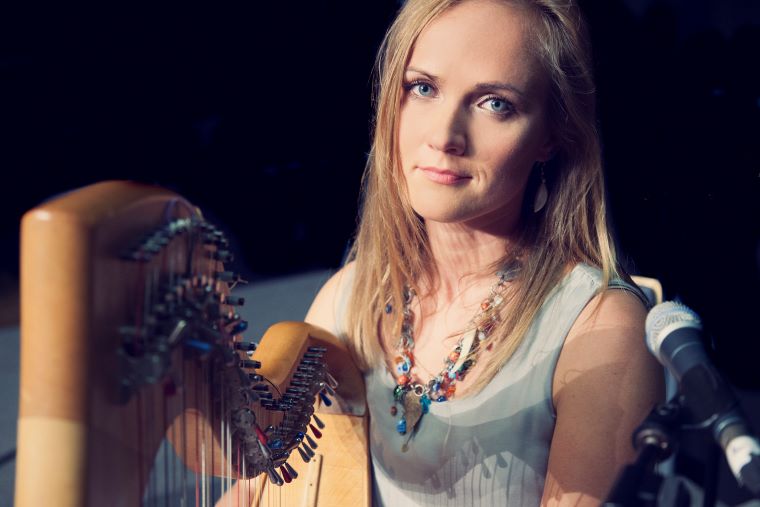 It was the sweet sound of the Donegal fiddle that first tugged at harpist Amy McAllister’s heartstrings.

“My parents took me on a trip there when I was five and I saw someone play,” recalls McAllister via email from her home in the Glens of Antrim in Northern Ireland.

“I was captivated, and knew right away that I had to learn how to make a sound like that. I dreamt of being able to play music, and I asked my mother for a fiddle every day until I was seven years old, when I first began lessons.”

Having grown up on the coasts of Ulster, McAllister and her family were no strangers to traditional Irish music.

“Northern Ireland has a very strong Comhaltas presence. People of all ages would gather in the local pub to play. That is where I learned everything I know. We all learned together by ear. It was an enjoyable and unintimidating way to learn music.”

By the age of 14, the young musician was ready for a change.“My mother heard of a small orchestra of harps in the city, and she encouraged me to go as we could rent a harp rather affordably. It was then and there that I was first introduced to the instrument. By that stage of my life, my whole weekend was taken up with music, from Friday nights through to Sunday nights. I dedicated my entire social time growing up to musical pursuits.” 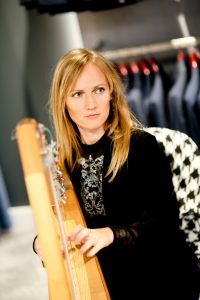 “It is easy to love the harp if you play it; the sound is so beautiful…”

That commitment paid off; today, she is one of the most prominent newcomers on the Irish music scene, both for her skillful playing and her smooth vocals.

“I have evolved massively as an artist. My sound now ranges from pure, straight-up traditional to my own songs, which are folkier and even poppier. I still love singing pure traditional as much as I do mainstream material, however. For a long time I felt loyal to traditional music, and even felt guilty about verging into singer-song writing territory. These days, writing songs is my favorite thing to do.

In the spring of 2017, McAllister released her debut album, String on String. The 12-track recording blends her traditional Irish background with modern songwriting and vocals.

“Doing my own album was a dream of mine. Reading the reviews and having people enjoy the songs I have written has been beyond fulfilling.”

Along with writing and recording, McAllister says that having the opportunity to travel is the vocation’s biggest reward.

“I have led an incredibly colorful, eventful and interesting life. I have packed so much, so many countries and so many fateful meetings with wonderful characters into my ten years as a professional. I have friends all over the world whom I met when I was touring. I have now performed in every American state except Alaska and Hawaii. I have lived my dreams. I feel very free and very fortunate.”

A career in music is not without its challenges, however.

“I changed my whole life around to do this, to get an album out. I moved from home and got a waitressing job. There are definitely easier career options, but this is what I have chosen and I feel lucky that I can do what I do for a living.”

She notes that the Celtic music scene has “exploded” in recent years.

“A lot is being done here in Ireland to promote the music, culture and language; children from both sides of the political divide are learning traditional music and I see that as a massive and progressive step forward, as Irish music is for everyone.

“I would, however, like to see the speaking of Irish become depoliticized, and more efforts made for this part of the world to become a bilingual state. Irish music and dance have grown exponentially, and enjoy international renown today thanks to big-ticket productions like Riverdance. We are working tirelessly to preserve our unique heritage.”

The rest of 2019 will be busy and exciting; McAllister is currently studying classical music, and hopes to release a new EP in the coming months.

“My next album will be more Celtic and folk than pure traditional. I am always changing, and I keep moving toward what I feel is right for me.”