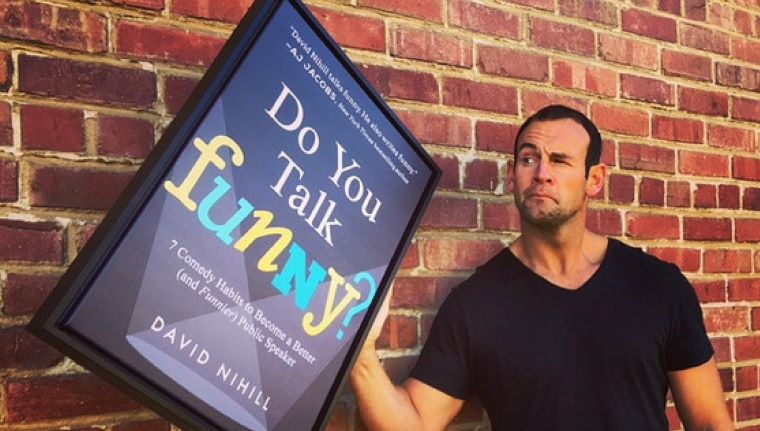 All it took to get David Nihill up onto the stage was a close friend’s spinal cord injury.

“I wanted to help him out after his accident, so I put together a fundraising comedy show,” explains the 39-year-old Dublin native via email. “The only problem was that he wanted me to host and open the show.”

Despite his deep fear of public speaking, both Nihill and the fundraiser were a huge success.

“Following that I decided to get up on stage as much as I could, even though I hated public speaking,” he tells Celtic Life International. “From there it snowballed. I opened for comedians at local clubs and put together storytelling nights and competitions.”

Before long, the accidental comedian – who has appeared in a number of publications, including Huffington Post, Forbes, The Wall Street Journal, and the Irish Times, among others – founded his own business called FunnyBiz Influencer, an online platform that provides services in both speech coaching and ghost writing.

In 2016, Nihill published a 500-page, comedic guide called – Do You Talk Funny? Seven Comedy Habits to Become a Better (And Funnier) Public Speaker. 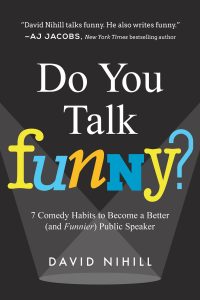 “I wrote the book because I wanted to address a fear within me,” he explains, “the fear of public speaking. The idea was to help other people facing that same fear by providing solutions in text form; here’s how to get over it, have a read and good luck to you! If you need more help ask comedians, as they are the true masters of this topic. Now I regularly get requests to speak at conferences and events. And if you write a book on a specific topic, folks expect you to be pretty competent on it; the only way I can be is to keep practicing.”

In just under three years, the book has received great critical and popular acclaim.

“I get messages all the time from people who tell me they used the tips in the book to help them with their own fears in speaking, and this includes everything from people talking about their company’s next quarter to their wedding speech.”

“Even though comedy and public speaking are the complete opposite of sports, the nerve pathways seem to operate in a similar way. Miss a few days or games and you become a little rusty. For me, the easiest way to stay sharp for a business audience is to practice before a comedy audience. Comedians are on stage more than anybody, and in more difficult conditions. Audiences often yell things like ‘Make me laugh! I’ve had a terrible week!’

“Then of course – as TV personalities like Stephen Colbert, John Oliver and Trevor Noah will attest – it is not enough to just be informative these days; in a world where people have entertainment at their fingertips, you need to bring something new to the table and, for me, there is simply no better practice ground than stand-up comedy clubs to hone it.”

With that in mind, he believes that the deep connections made each day far outweigh the challenges.

“This has led me to some opportunities I never dreamt possible. I have had the opportunity to share the stage with some of my favorite writers, including Steven Pinker and Dan Brown. I have also shared the stage with some of my favorite comedians and have even taught at Stanford Graduate Business School. When you do standup comedy you get more concise and economical in your words, and speaking in sound bites seems to more in demand in today’s fast-paced environment. It is no coincidence that actors, hosts, entertainers, top TED speakers and TV and radio personalities often come from or have dabbled in the world of comedy. There they learned brevity is levity.”