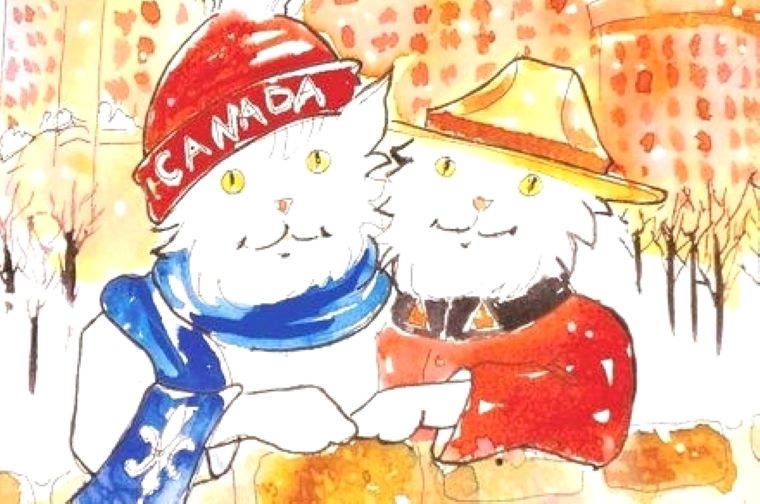 Celtic Life International’s favorite feline duo Angus and Edmond are back again – and this time they are visiting their friendly neighbours to the north.

Series creator Gunna Dickson explains that the idea for The Canadian Adventures of Angus and Edmond came to her during a cold and restless winter.

“My favorite getaway destination is Europe, but I had only a few days, so I decided to do the next best thing – visit Montreal and Quebec City. And, of course, the boys are always with me in spirit,” she shares via email. “I had been to both cities a number of times before. I had visited Montreal in both summer and winter and loved the architecture, the underground shops, and the boat rides on the St. Lawrence River.”

She notes that her abilities as a writer and storyteller have evolved over time.

“I have generally become more observant, paying closer attention to actions and detail. I feel more engaged and, hopefully, that helps to further engage readers as well.” 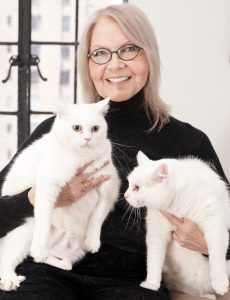 Her cat crusaders have grown as well.

“The more that they are exposed to different people and places, the more they learn. Travel is a good teacher. They make new friends everywhere. And despite his pronunciation issues, Meowsieur Angus persists in trying to speak French. Edmond’s Spanish is improving.”

“I got back to NYC just weeks before the first lockdown. And then came two dreary and depressing years. I was in no rush to put out a book because I knew it would not go anywhere. I would not go anywhere. People were confined and frightened. There would be no book signing in Key West, as there had been for the previous books. What was the point? I lost enthusiasm.

“Another challenge was working at a distance from my closest collaborators,” she adds, referring to the book’s talented illustrator Judi Bradford – who was 1,000 miles away in DeLand, Florida during the time of production – and layout specialist Linda Tilta, who lived even farther away in Riga, Latvia.

This is the first time Bradford has worked as the main illustrator on the Angus and Edmond series. Previous volumes were illustrated by Jon McIntosh or Suellen Crowley Weaver.

“Gunna’s book was a delight and the timing worked out well,” says Bradford. “I was in the heat of summer in central Florida drawing cats in snowball fights. Just visualizing all the snow of the Canadian adventures cooled me down. And I spend a lot of time drawing cats on any given day.

“Pencil and paper were my best friends in childhood,” she continues. “I was an only child for a long time, and we lived in pretty isolated places. So, I wrote stories and drew pictures a lot. In fourth grade in Bradenton Florida, I went to a free art class at the museum and began to see how drawing worked and I was hooked. I still love pencil drawing.”

Though only recently released, response to the new story has already been strong.

“The regular Angus and Edmond fans love it,” says Dickson. “From Honolulu to Scotland, Florida and Kansas, they have been very generous in their praise. One reader in St. Andrews said it has become a family tradition to read the books. I hope that my laddies will get more fans with each book, but we still have a way to go.”

The scribe admits that it is hard to say what the future will hold for Angus and Edmond.

“Since all of their adventures are the result of trips that I have taken myself – with a liberal helping of fantasy – where they go next will be determined in part by travel restrictions.”