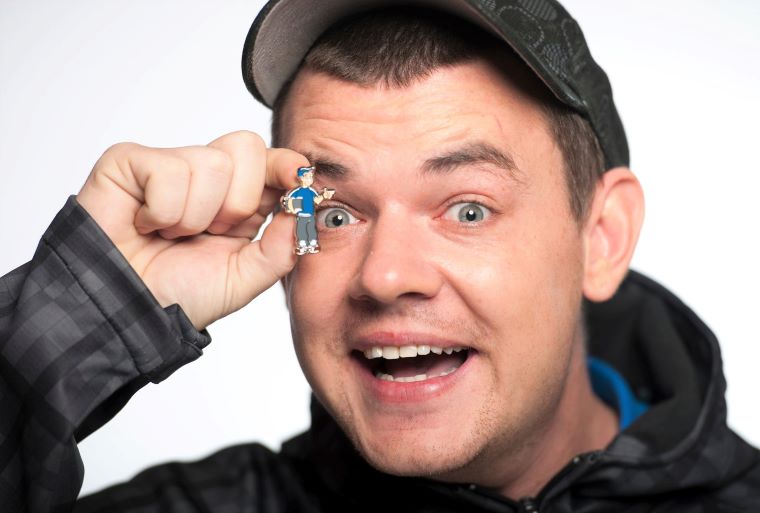 Even with so much time and space on his hands, 38-year-old Irish actor and producer Danny O’Carroll is keeping busy on the home front. Recently we spoke with the star of Mrs. Brown’s Boys from his home in northwest Ireland.

You are in Donegal, correct?
Yes, I am. I was born in Dublin, but I bought a home here in Donegal when I was 19, so I have been in the area half of my life. We moved down the road a while back to be closer to my wife Amanda’s parents, and we are one big happy family these days. And it is a great place to raise our two kids (Jamie and Blake) – the community is very safe, and everyone is really friendly and there are lots of opportunities for them to keep busy with outdoor activities. It is a very beautiful part of the world, and I wouldn’t want to be anywhere else during the COVID-19 pandemic.

What has life been like for you during lock down?
I suppose that it hasn’t been that different for us than it has been for anyone else. Everything just came to a full stop, and we really haven’t gone anywhere. That has been both a blessing and a curse. On the plus side, I have enjoyed just being at home with my wife and my kids – playing games, going for walks, cooking, and having these big, sit-down meals together each day. On the other hand, I do miss travelling and performing in other parts of the world. Mostly, though, I miss my dad (show founder Brendan O’Carroll – a.k.a Mrs. Brown). He has been in Florida during all of this, so at least he has had good weather, but I would give anything to visit with him – just to see him in person and give him a big hug and know that he is healthy and happy.

What do you miss most about touring the show?
It’s funny, y’know – at first, when COVID-19 hit and we were just forced to close-up shop, I was ready for a break. Between the series, the movie, the live show, and other work-related commitments, it has been pretty much non-stop for all of us for years. And that catches up with you over time. The little holidays here and there help, but you never really get the time and space to just be and breathe for very long. So, the first six months were like ‘oh, this is great, all this time and space’. And then, like everyone else, I started getting a little restless, wondering ‘geez, when is this going to end’? I kept busy, but more and more that little voice in my head was like ‘I can’t wait to get back to doing what I love’. Along with the travel and the performances, I miss the audiences and meeting people. I love it when we are performing somewhere, and some Irish ex-pat stops in to say hello and immediately we are like long-lost best friends. Mostly, though, I miss just being with my family on the road and having those day-to-day adventures and experiences with them. 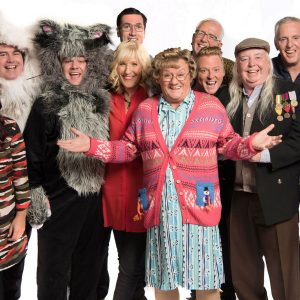 Being so close-knit on the road must be challenging at times?
You would think so, right? Many people can handle their families for a few days on holiday or at Christmas time, and then the baggage comes out and issues and conflict arise. But it is not like that at all with us. We rarely have difficulties, if ever. We all get along quite brilliantly on set and on tour. I am not sure if it is supposed to be that way, but it is with us.

Why is that?
Well, I believe it is because we all have a lot of love and respect for one another, both as people and as performers. We bring out the best in one another and working on something like Mrs. Brown’s Boys – which has become so massive around the world – also brings out the best in us. It has given all of us something much bigger than our own individual selves to be a part of. And I don’t mean only the cast, but all of the crew and the support also. What we do is very much a team effort, and it has been like that from the very start.

How much of that is because of your dad?
Oh, he is almost entirely to blame! Seriously, though, he is the glue that keeps it all together – it is his vision, his mission, his project. We all contribute creatively in our own way, for sure, but he is the one who puts all of the pieces together into a big picture. And he is always so good with everyone – patient, supportive, understanding…

And funny…
Oh, you don’t know the half of it. I mean, audiences see the 30-minute show on TV or the couple of hours on stage during the live performances, but that is just the proverbial tip of the iceberg – there are many, many hilarious moments off-stage as well. Some of those moments eventually find their way into a script, or sometimes they even find their way onto the stage that same day – especially some of the inside jokes between the cast members. Sometimes the unscripted stuff is the funniest, but sometimes it just bombs altogether. Either way, I love those moments the most.

Some of those impromptu gags can be…dangerous.
Again, you don’t know the half of it. With dad, you always have to be on, to be ready, because you just never know when he is going to break script. He does that all of the time on the TV series – somebody will blow a line or just start giggling and he will just run with it, take it in an entirely different direction altogether, and it usually works out even better than what the scene had originally called for. With the live show it is always a risk, as there is simply no turning back once it starts. There are no retakes. That’s what is so great about it for us, as performers, because it keeps us on our toes creatively and no two shows are ever the same. And when it works, it takes the experience to new and hilarious places for the cast, the crew, and the audiences. However, it doesn’t always go well, and those are the moments when you are just left standing there on stage, cringing to the sound of crickets. 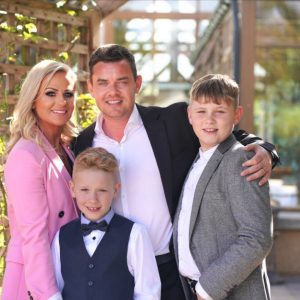 How hard is it to stop being Buster Brady once you’ve left the set or stage?
It isn’t hard at all. Over time I have learned to just leave it at the door at the end of the day. It was maybe a bit more difficult when we first started the series because I was younger, and I hadn’t really fully established my own identity yet. But being married and having kids has really settled me. My family keeps me grounded and rooted in reality and they remind me every day what is truly important in life. I am happiest being a husband and a dad and I think that is really what I was born to do more than anything.

How much is Danny O’Carroll like Buster Brady?
Oh, not at all really. I mean, it is inevitable that you bring bits of yourself to the role each day – maybe little pieces of your own persona that peek through now and again – but I am not nearly as funny as Buster. Now, having said that, whenever Paddy (Houlihan, who plays Dermot on the show) and I get together it is always a laugh. We have been best friends since we were sperm, and when we connect in person, on the phone, or online, there is a good chance that there will be a giggle or two or a dozen to be had. So that comedic chemistry that audiences see on the screen or on the stage is pretty much what we are like with one another in real life.

What’s next on your agenda?
Well, that’s the big question, right? Who knows how long this pandemic thing is going to keep us locked down – all we can do is be as prepared as possible when the restrictions are lifted to start moving forward again. I am keeping quite busy though, writing, exercising, being involved in raising funds and awareness for a variety of charitable organizations, and, of course, taking care of my wife and my kids. Or maybe they are taking care of me. I mean, we need to maintain sone sense of normalcy through all of this, because at some point, hopefully, things will go back to the way they were. And I also think it is important to keep a sense of humour during these times. Comedy is more essential than ever.