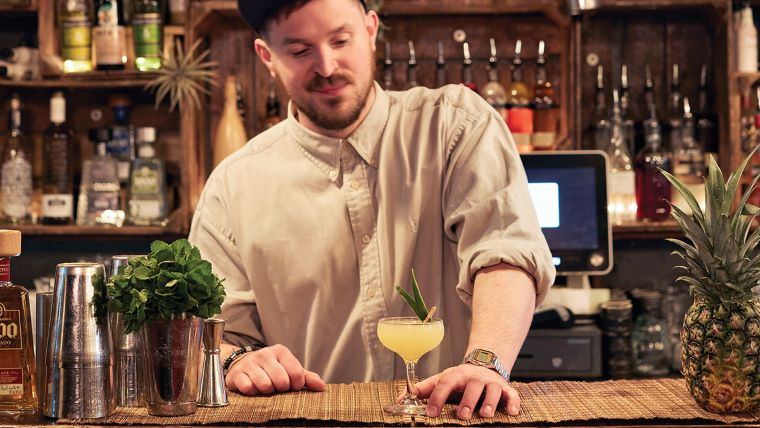 Belfast is a bustling city packed full of great pubs and bars, renowned for their old-world atmospheres and live traditional Irish music.

The Dirty Onion
Boasting an impressive space in one of Belfast’s oldest buildings, The Dirty Onion and The Yardbird is an authentic Irish music bar that hosts live entertainment throughout the week. Also calling itself home to one of the city’s biggest beer gardens, this former warehouse dates all the way back to 1680 and features a barrelman statue outside, dedicated to the former workers. Whether you go for the cosy open fire, the Irish whisky or the beer garden for a hot day, this bar will have you covered.

The Duke of York
Situated in the vibrant and artistic neighbourhood known as the “Half-Bap”, The Duke of York Belfast is a huge, old-world-style pub that features stunning décor that couldn’t get more traditional! Tucked away on a small, cobbled alleyway, this is one of the most popular stop-off places for tourists exploring this city’s many awesome pubs and bars, so it’s worth taking a visit to see what all the fuss is about.

Kelly’s Cellars
The oldest licenced pub premises in the city, Kelly’s Cellars dates all the way back to 1720 and is one of the best places to visit if you’re looking for a proper authentic Irish pub experience. A former warehouse and meeting place for members of the United Irishmen movement in the late 1700s, this establishment oozes history and charm. Barely changing since it opened, Kelly’s Cellars has retained its old-world atmosphere, especially through its live traditional music sessions.

Sunflower Public House
On the corner of Kent Street & Union Street is the quaint corner pub known as Sunflower Public House. A relatively new establishment compared to many other pubs in Belfast, this no-nonsense bar has a great beer garden with a fantastic wood fire pizza oven. Outside, it can be instantly recognised by its security cage around the front entrance, a relic from The Troubles that the owners of the bar famously announced that they would keep as a reminder of the past. 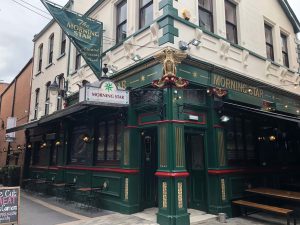 Morning Star
Hidden from view down an alleyway off Ann Street is Morning Star Belfast, a Grade II-listed historic pub dating back to 1810 that’s packed full of character and traditional charm. Known for it’s warm and cozy atmosphere, this pub has everything you could possibly ask for behind the bar! Not only that, but this place is also well-known for its food which is worth checking out if you’re feeling peckish.

Harp Bar
A nod to the style and atmosphere of Victorian Belfast, the red velvet interior of Harp Bar Belfast along with its historic décor gives off a unique and vibrant charm. In fact, this bar played a huge role in the history of punk rock, becoming Ireland’s number one venue for live punk music. Despite being bombed during The Troubles and moving premises, this bar continues to be a huge favourite with the people of Belfast and those who travel to come and drink here!

The Garrick
Founded in 1870, one of the oldest pubs in the city is The Garrick, another Victorian style drinking hotspot split into a front and back bar. The front bar regularly hosts live traditional music performances from local artists, and the back bar hosts regular DJs and the Belfast Music Club. Regularly visited by British author William Thackeray, this bar is packed full of history and charm that’s hard to find in many other places!

The John Hewitt
Situated in the city’s Cathedral Quarter is The John Hewitt Belfast, named after the famous local poet who established the Belfast Unemployment Resource Centre just before his death. The organisation opened the pub in his name in 1999 as a way to fund their work… and still does today! If you happen to stop by, you’ll find live music performances throughout the week alongside an awesome selection of whiskeys, gins, beer, wine and spirits!

White’s Tavern
The first establishment to receive a tavern license in the city, White’s Tavern Belfast officially opened in 1630 and is widely known as the oldest pub of its kind anywhere in the city. Its location, tucked away from the busy city streets, is surrounded by all the biggest and most well-known tourist spots in the city. This makes it a brilliant place to stop by if you’re exploring the city centre or browsing at the nearby Victoria Square Shopping Centre. 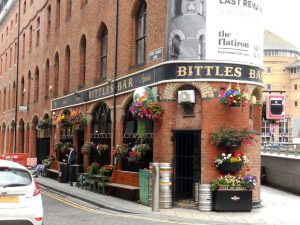 Bittles Bar
One of the more unusual establishments in the city, Bittles Bar is a unique Belfast pub that’s housed in a triangular flat-iron building. Situated on the corner of Upper Church Ln and Victoria Street, this bar was built in 1868 and still boasts an authentic and old-world atmosphere. Its lounge is also home to a vast collection of historic paintings, pictures, and other relics from The Troubles.

The Spaniard
Opened in 2006, The Spaniard Belfast is one of the newer players on the Belfast pub scene but packs a real punch when it comes to style and atmosphere! A bar specialising in rum-based concoctions, this is a strictly over-25’s bar, which is something to bear in mind if you have any 18–24-year-olds in your group! This pub is described as having a Spanish vibe with a rock n’ roll twist. The candlelit tables and delicious drinks give off a relaxed feeling, which is fantastic for those who’re looking to take a bit of a break from Belfast’s busy shopping streets!

Maddens Bar
Tucked away behind CastleCourt shopping centre, Maddens Bar Belfast is a truly authentic Irish pub that’s traditional in every sense. Dedicated to putting on live performances throughout the week, the vibrant and welcoming atmosphere in this pub will take you right back to the last century. Although the bar sits on a quiet corner, it’s no more than a few minutes’ walk away from Castle Street, one of Belfast’s busiest roads. This means there’s never a bad time to pop in and see what this bar is all about if you’re in-and-around central Belfast.

McHugh’s Bar
Split into four distinct rooms, McHugh’s Bar Belfast is a traditional Irish pub, a basement bar, a restaurant, and private dining venue… all under one roof! Situated on Queen’s Square right by the famous Albert Memorial Clock, this inner-city pub is housed in an impressive Georgian building that dates all the way back to 1711. The basement bar hosts regular live music sessions and being open ‘til just after midnight, this place is always worth a visit.

Bootleggers
Taking inspiration from those who fought against Prohibition in 1920’s America, Bootleggers Belfast is a modern and stylish bar that offers much more than just great beer. Serving food every day of the week, you’ll find delicious tacos, big burgers, and the bar’s famous chilli dog on the menu. Situated in the vibrant Cathedral Quarter, you’ll be spoilt for choice with the sheer number of cocktails, local brews, and American craft beers on the offer as well! 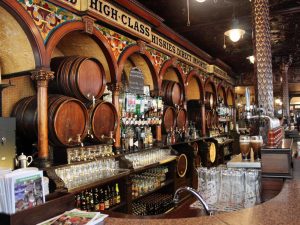 The Crown Bar Liquor Saloon
Known simply as “Crown Bar” to most, this famous Belfast pub was established in 1849 and stands as a fantastic example of what a Victorian era “Gin Palace” looked like! In 2007, it was restored back to its original high standard of detail by the National Trust for £500,000 and even featured in its own documentary. These days, it’s a cozy gas-lit bar that you shouldn’t miss out on seeing!

The Points
Known for being a predominantly whiskey & alehouse, The Points Belfast is a well-stocked bar that boasts over 80 kinds of both international and local tipples for you to try. Hosting nightly live music performances, this lively and atmospheric bar is a favourite for both tourists and locals. With a fantastic cocktail menu of totally unique drinks and well-known concoctions, you’ll find it difficult not to find the drink you’re looking for!

The Woodworkers
Known as the city’s “Best rotating tap room”, The Woodworkers Belfast is a fantastic craft beer and cocktail hotspot where seven beers are constantly swapped and changed on the taps. Like with wine tasting, you can get a “flight” of beers at this bar and sample various tipples for yourself! The nearby Boundary Brewing Co-Op is known to supply some beers exclusively to this establishment, so there’s no better place to try Northern Irish beers than in here!

The Perch Rooftop Bar
Awarded “Best Outdoor Space” for its eclectic beer garden area, The Perch Rooftop Bar Belfast is exactly what it says on the tin… and is the original rooftop bar in the entire city! Situated in the iconic Linenhouse Building on the 5th floor, this exposed brick bar is packed full of quirky décor like birdcages and window features. With regular cocktail happy hours, live music performances and “Perch Pizzas” served through the week, this is an establishment you won’t want to miss.

Lavery’s
The stylish wood panel interior and old-world pub booths in Lavery’s Belfast gives this pub a one-of-a-kind vibe that’s hard to compare with many other places! This fantastic establishment covers three floors and is split into numerous spaces, each with their own charming features. Featuring a front & back bar, roof terrace and a cobbled yard, this eclectic spot is worth your time. 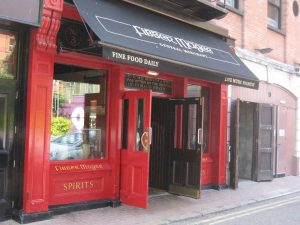 Fibber Magee
Part of a group of pubs called “Robinsons Bars”, Fibber Magee Belfast doesn’t cut any corners when it comes to delivering itself as a truly authentic Irish tavern! Like many other pubs across the city, live Irish traditional music performances are a nightly occurrence and is worth checking out at the end of a long day. The atmosphere in this historic pub is next-to-none, so make sure you stop by and see what all the craic is about!