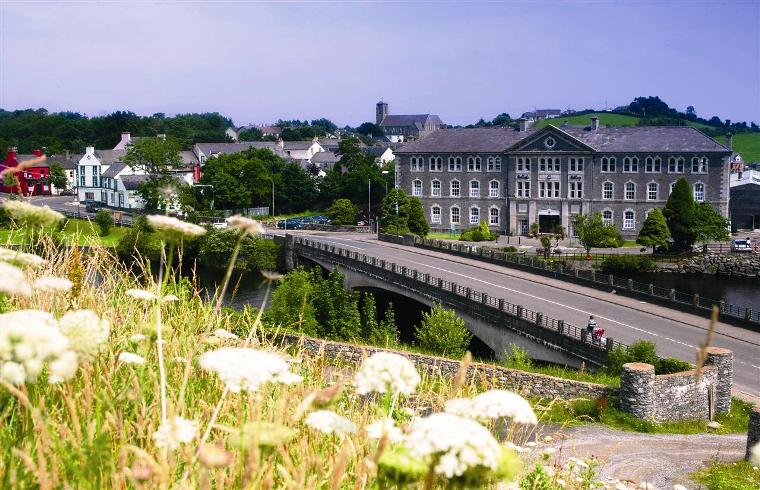 Facing hard times and unemployment, the village of Belleek in County Fermanagh, Northern Ireland, was at its lowest point in the mid-1800s when John Caldwell Bloomfield and his partners founded Belleek Pottery.

And while the world around it has had its share of ups and downs since that time, both the company and its namesake township have continued to thrive.

“I am delighted to report – as we celebrate our 160th anniversary in 2017 – that through world wars, depressions, recessions, and the economic and political challenges we have had here in Ireland as well, we very much remain in business,” says John Maguire, the company’s current managing director.

“In fact, today we are one of the largest employers in Fermanagh, and one of the biggest tourist attractions in Ireland.”

Those good fortunes have only served to strengthen the ties between the company and local residents. 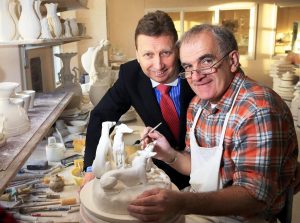 “The pottery is very much at the heart of the village,” shares Maguire. “The population of Belleek is approximately 500 people, and most families that live in the area are employed with us.”

The work at Belleek is bountiful; master artisans sculpt the pottery by hand, tour guides show tens of thousands of visitors around the facility and the community, while many more are employed at dozens of retail outlets across both Ulster and the Republic.

Like Waterford Crystal in Eire’s southeast, Belleek Pottery is world-renowned for its fine craftsmanship, making it especially popular with collectors (one aficionado owns 7,500 pieces!) Their wares ship to all corners of the globe, including the U.K., mainland Europe, China, and Australia.

Their biggest export market, however, is North America.

“We actually had our first trade show in Philadelphia back in the 1880s,” notes Maguire. “For any company to remain in business for a long time, it is vital to open up strong foreign markets. The U.S. and Canada have been hugely important in our growth.”

In recent years, Belleek has gotten into the business of online retailing as well. They also created a brand of contemporary products, called Belleek Living, in order to grow both their relevance and competitiveness in the global marketplace.

The company’s bread and butter, however, remains their Belleek Classic line, which is still crafted – and still held to the same stringent standard – as it was 160 years ago,

“Each piece will pass through 16 different pairs of hands,” explains Maguire.

“Our founders were quite clear in their original mandate that each piece must be perfect. It has been a very high standard to maintain, but it has certainly served us very well for over a century and a half.”

That rigorous practice isn’t the only policy that has remained intact for 160 years. The very make-up of the company, as the beating economic heart of the entire village of Belleek, is another firm standard that has withstood the test of time. 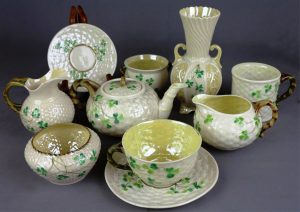 “The business is in a good place to hand off to the next generation of people from this area, and that is at the top of our agenda,” says Maguire, who adds that the company’s founders were adamant that their brand remain inherently and unmistakably Irish. “That is extremely important to our retailers around the world, and also to our collectors and customers.”

While Belleek Pottery has enjoyed a good, long run, Maguire is cognizant of current challenges facing the marketplace, including changes in consumer habits and – perhaps more poignantly – the uncertainty brought about by the recent Brexit vote.

“At the end of the day, we cannot concern ourselves with matters that are out of our hands. In truth, by continuing to commit ourselves to excellence in the quality of our craftsmanship – as we have for the last 160 years – we are in full control our own destiny.”

That confidence, he believes, comes from the community.

“We have been very lucky to have such a loyal workforce through the years. These folks are very passionate about what they do, and they take great pride in where they are employed. We are very conscious of the importance of Belleek Pottery to the community, and to this region, and we are equally aware of how important the people here are to us. Without them, we wouldn’t have made it to 160 years. With them, however, we hope to thrive for another 160…”