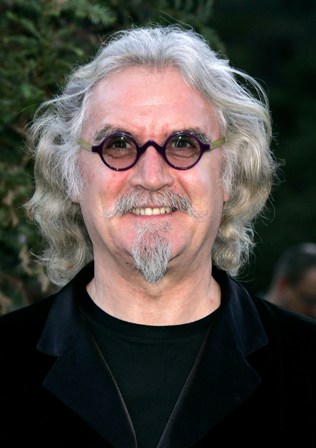 For his voice work in the beautiful animated tale Brave, Connolly was moved by its portrayal of his home soil. “Isn’t it a beautiful, gorgeous film? My heart sang when I saw it, the colours and the way it painted the Highlands. Of course I was so proud when they asked me to be King Fergus. It’s one of the films that will be watched again and again, but when you’re doing something that’s reflective of home you give it absolutely everything you’ve got.”

In Dustin Hoffman’s Quartet, Connolly found himself among some of the finest acting talent around, which he says was a daunting proposition but one which helped to raise his own performance.

“The story, about these retired opera singers living in a nursing home, really intrigued me. But when Hoffman told me who was in it, I wanted to say ‘no’. I was scared I wouldn’t match up. But I remember working with Judi Dench and realizing how these sorts of people bring out the best in you. So I said, ‘yes, let’s do it’.”

Joining stage and screen legends Maggie Smith and Michael Gambon wasn’t nearly as nerve-wracking as Connolly had thought it might be. “I never worked with Maggie before, and if I’m honest, she scared me a bit,” he smiled. “I knew she was formidable and I was genuinely a little nervous to meet her.   But she was incredibly lovely and charming. I thought I heard stories about Gambon being difficult and hard to work with and nothing could be further from the truth.”

We already know The Big Yin can sing, but can he sing opera? “There’s a scene at the end where the quartet gets together for their first performance in years, and we actually underwent extensive singing training for this scene,” he recalled. “We performed it for Dustin, and he wept with joy. He was astounded so we can’t have done a bad job!”

Connolly is soon returning to the stage to do what he does best–making people laugh. “It’s what I started out doing. I guess it’s nice to come back to what you know,” he said.

However, there have been a few hiccups in recent times – Connolly has twice fended off criticism for chastising audience members for disturbing his act. “It was just those two incidences where a few audience members annoyed me and I just thought, ‘Forget this, I’ve had enough’,” he explained. “I’m not in the habit of doing that and I’ve thrived off audience participation for my entire career. But when somebody keeps interrupting you or there are so many bodies moving in and out of the theatre, it’s distracting and it drives me mad sometimes.”

Although his trademark style of going off on tangents for an hour or so before coming back to his original point means most people probably won’t notice, Connolly identifies a stumbling block: “I’m starting to have problems with remembering things too. It’s getting worse,” he said. “When you’re nervous, you forget everything. I get blanks all the time now, although it’s usually as I’m about to go on. I forget everything I’m supposed to do and just think ‘what am I going to say to these people?’ But when I go out, I become the other guy, thankfully…”