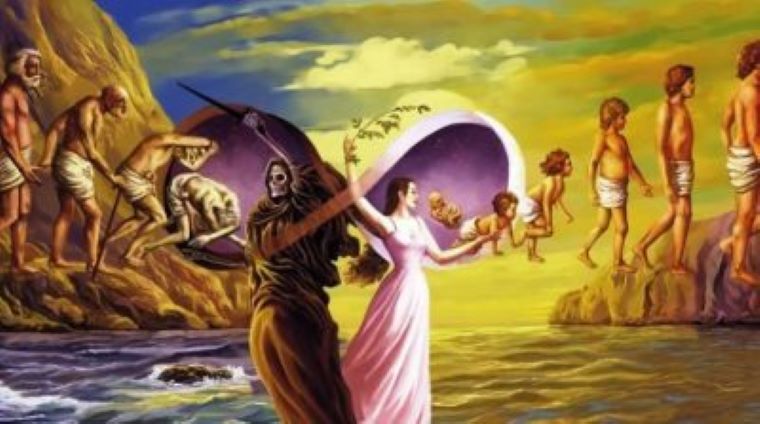 The Druids left us no written record of their religion, or the belief system of our ancient Irish ancestors. What we know has been patched together from later Christian interpretations of the myths and legends, and the writings of observers such as Julius Caesar, but none of it can be proven to be fact.

Reincarnation is a Latin word, meaning “entering the flesh again.” As far back as the 1st century BCE, Alexander Cornelius Polyhistor wrote that the Gauls teach “that the souls of men are immortal, and that after a fixed number of years they will enter into another body.”

Julius Caesar wrote of the Celts in his ‘De Bello Gallico’ that “the principal point of their doctrine is that the soul does not die and that after death it passes from one body into another….. a firm belief in the indestructibility of the human soul, which, merely passes at death from one tenement to another; for by such doctrine alone, they say, which robs death of all its terrors, can the highest form of human courage be developed.”

Although these writers are referring to the Celts of Europe, it is reasonable to suppose that the Irish people of the same time period may have held similar beliefs. Indeed, there is much evidence to support this in the stories of Irish mythology.

In the Tochmarc Étaíne, ‘The Wooing of Étaín’ from the Mythological Cycle, Etain is transformed by magic into a butterfly. After fourteen years, she lands in a cup of wine which is drunk by the wife of Etar, a warrior of the Ulaid. Etar’s wife swallows the butterfly and becomes pregnant, and thus Etain is reborn into human form a thousand years after her first birth.

This story illustrates the Celtic acceptance of transformation, ie the temporary taking of another shape, and transmigration, when the soul transfers into another body following an actual rebirth. 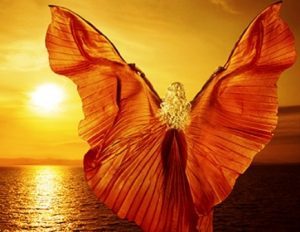 A similar story is told about the birth of Cuchullain. Dechtire drank a cup of wine in which a mayfly had landed. That night she was visited by the God Lugh in a dream, who told her that the mayfly was him, and that she would soon give birth to a boy child. When she awoke, he transformed her into a swan, and took her to his halls in the Otherworld, where she duly gave birth to Setanta, She returned with him to Emain Macha in Ulster, where he was raised, and went on to become the hero known as Cuchullain.

The biggest difference to the Etain story, is the presence of the god Lugh. It implies that not only did the deity father a son on a mortal woman, but that he was actually reborn as his own son, thus manifesting himself again in the mortal world.

Most people are familiar with the story of the “Táin Bó Cúailnge,” the “Cattle Raid of Cooley,” one of the most popular tales of Irish mythology. It tells how Connacht’s Queen Medbh and her husband Aillil waged war on Ulster over possession of the mighty bull Donn Cúailnge. At the end of the saga, Donn Cúailnge fights the white bull Finnbhennach and kills him before dying of exhaustion.

It is interesting to note that these were no ordinary beasts. In the “Tale of Two Swineherds,” Friuch and Rucht are minding livestock belonging to the gods Ochall and Bodb, when they begin to quarrel. A fight breaks out, in which they assume many animal forms in order to gain mastery of each other, finally becoming two worms. These are promptly swallowed by two cows grazing nearby, which then give birth to the two bulls Finnbhennach and Donn Cúailnge.

Unrequited love is often associated with reincarnation in Irish mythology. In the Fenian Cycle, hero and leader of the Fianna, Fionn mac Cumhal, rescues a small deer in the forest, which turns out to be a Sidhe Princess named Sadbh. She had been transformed by the mysterious figure known only as the Dark Druid, for refusing to marry him. In the safety of Fionn’s fortress, she is able to return to her true form. She and Fionn fall in love, and she becomes pregnant, but when Fionn is away at battle, the Dark Druid returns and steals her away, returning her to the shape of a doe. She is never seen again, but apparently gives birth to a human child, a son named Oisin, whom Fionn finds on the slopes of Benbulben after seven years of searching.

Similarly, in the popular Irish legend of The Children of Lir, Aoife transforms Lir’s children into swans as she is jealous because he loves them more than he loves her. They are doomed to spend 900 years as swans, during which time St Patrick converted Ireland to Christianity. A monk was able to baptize them and turn them back into humans, but unfortunately, they were so old, they died. Another version, possibly pre-Christian, claims that the marriage of Lairgren and Deoch broke the curse.

Another Aoife, daughter of Daelbeth, and Luchra, daughter of Abhartach, both fell in love with Illbreac, but he had eyes only for Aoife. In a fit of jealous rage, Luchra turned Aoife into a crane, whereupon she flew to the lands of Manannán and lived there for 200 years. When she died, Manannán was so sad, he used her skin to make the crane-skin bag in which he kept all his magical treasures.

Mongán mac Fiachnai was a Prince of the kingdom of Cruthin who is recorded in the Annals as dying in 625AD. Little is known about him, except that he was said to have possessed remarkable shape-shifting powers, and had access to the Otherworld. One curious tale claims that, although fathered by Sea-God Manannán, he is in fact the reincarnation of hero and leader of the Fianna, Fionn mac Cumhall.

It might be that the concept of reincarnation served to perpetuate those ancestors, kings or heroes most admired and beloved, that perhaps the ordinary folk were loath to let go. Certainly, the characters reputed in mythology to have transformed or to have been reborn seem to arise from nobility, royalty, deities or the hero-warrior, rather than commoners. 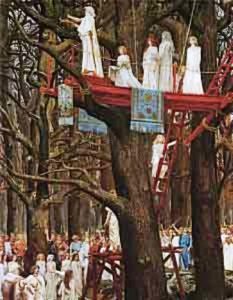 As the Milesians in their fleet of ships neared the shores of Ireland, intent on wresting it from the Tuatha de Denann, their poet Amergin chanted this well-known verse, which begins:

“I am the wind which blows over the sea,
I am the wave of the ocean,
I am the bull of seven battles,
I am the eagle on the rock . . .
I am a boar for courage,
I am a salmon in the water…”


At first glance, these words seem to confirm a belief in transformation, or shape-shifting, but perhaps they had nothing to do with reincarnation at all. It occurred to me that this poem could just as easily have been an example of Dichetal do Chennaib, a technique of the ancient Fili, or poet, involving chanting to achieve an altered state of being, or knowing, much as the warrior before battle would invoke the riastradh, or battle frenzy. Perhaps he hoped to achieve each of these qualities, or perhaps it was simply boastful talk designed to strike fear into an enemy which well understood the qualities each of the entities quoted.

The mythology we have inherited is ambiguous at best, and hard to decipher. Though it is certainly possible that the Celts and ancient Irish people may have believed in the concept of reincarnation, it might not quite be in the way we understand it today. It is not something we can say with any certainty. While to some this may be a source of frustration, for me, it is its strength; it is open to interpretation, thus it can be whatever you want it to be.